Relax in southern comfort on the east bank of the Mississippi. You're just around the corner from Beale Street and Sun Records. Watch the ducks, throw back a few and tell us what's on your mind.
Post Reply
58 posts

Stumpf was arrested on September 9 after an online audit by American Online and Yahoo revealed that he was storing child pornography on his accounts. Both companies notified the National Center for Missing and Exploited Children. The center notified the Oklahoma State Bureau of Investigation, which conducted an investigation into Stumpf, who had recently moved to the state.

During the investigation, officers were reportedly shocked to find “snuff” stories, some of which were written by Stumpf. In the stories, Stumpf fantasied about “kidnapping, raping, torturing, and killing children.” The graphic stories were recovered from Stumpf’s computer during the investigation by state and local authorities.

According to a report from KFOR in Oklahoma, Stumpf was in possession of 500 pornographic pictures and videos of children, along with 34 DVDs of child pornography. https://www.breitbart.com/tech/2019/09/ ... y-charges/ 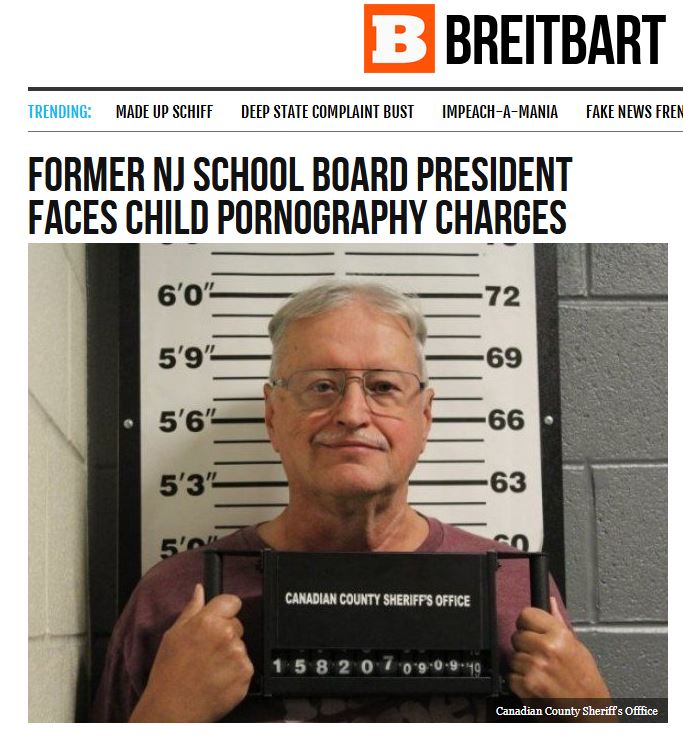 The shit-eating grin of this alleged pedophile's booking photo immediately and instinctively made me look at his politics.

What causes does evil contribute to? It took about a minute to confirm what I thought I already knew: He's a Bernie supporter and Democrat contributor...

My third eye and instincts never fail me.
The shit-eating grin and the lack of guilt in his eyes gave him away.

The choice is not between left or right, Democrat or Republican it's a choice between good and evil.

In a clip that has gone viral across social media platforms, a woman who was, in all likelihood, an opposition plant, confronted AOC during a town hall in Corona, Queens last night and insisted that her 'Green New Deal' wasn't enough and that instead "we must eat the babies" to stop climate change from destroying the world.

Not so sure she was an opposition plant...
https://ka-electronics.com

"Bill Gates Was Much Closer To Jeffrey Epstein Than He Initially Let On" https://www.zerohedge.com/health/bill-g ... tially-let


Jeffrey Epstein had a lot of high profile friends from the upper echelons of business, government and hollywood - most of whom now claim they barely knew the guy. His associates, many hanging out with Epstein after his 2008 conviction for soliciting prostitution from a minor (which he likened to "stealing a bagel"), include Bill Clinton, Kevin Spacey, Les Wexner, Prince Andrew and Ehud Barak.It also includes Bill Gates, who claimed last month that he didn't have a "business relationship or friendship" with Epstein, and only "met him." According to the New York Times, however, Gates and Epstein met at least six times, including visits to Epstein's New York mansion on 'multiple occasions,' staying at least once into the night.

Also contradicting Gates' distancing are flight records, which reveal that "Gates flew with Epstein from Teterboro Airport in New Jersey to Palm Beach on March 1, 2013," on Epstein's private jet - "one of the few flights that year where pilot Larry Viskoski recorded the name of a passenger,"According to the Daily Mail.

And what the hell is growing on Bill Gate's neck?

Is that Ebola, a side effect from one of your vaccines, bites from your mutant mosquitoes, maybe contact with your chem-trailing project or does that just happen after you eat a lot of dead babies? What are those things Bill? Damn you look old for your age.
https://ka-electronics.com

So the cancel culture is breaking out here too?

Guilt by association is not definitive but looks bad, all of Bill Gates charity work looks good and is good.

Bill Gates is the "Chief Science Officer" of the globalist new world order.

Gates wants to lie to you and tell you that his vaccines do not cause sterilization when in fact sterilization (and premature death) is the objective.
Biil Gates and his father, also Bill Gates, are very evil men.
Study the work of Cold Springs Harbor and the early eugenics programs.

Gates lied about his involvement with Epstein.
If his relationship was on the up and up he wouldn't have lied.
https://ka-electronics.com

"During the search of the “Finders” properties, a Department of Justice review of case documents showed a United States Customs Service (UCSC) officer claiming “to have observed a substantial amount of computer equipment and documents purportedly containing instructions for obtaining children for unspecified purposes,” the FBI stated. “The instructions allegedly included the impregnation of female members of the community, purchasing children, trading children, and kidnaping (sic) them.”"


Zaid also apparently likes to visit water parks and Disney World by himself and once tweeted, “I would have joined FBI just for the free Disney passes.”

Yesterday it emerged that Zaid, who previously “bragged about his connections to John Podesta” according to lawyer Robert Barnes, tweeted in 2017 that it was vital to “get rid” of Trump and that the “coup has started.” 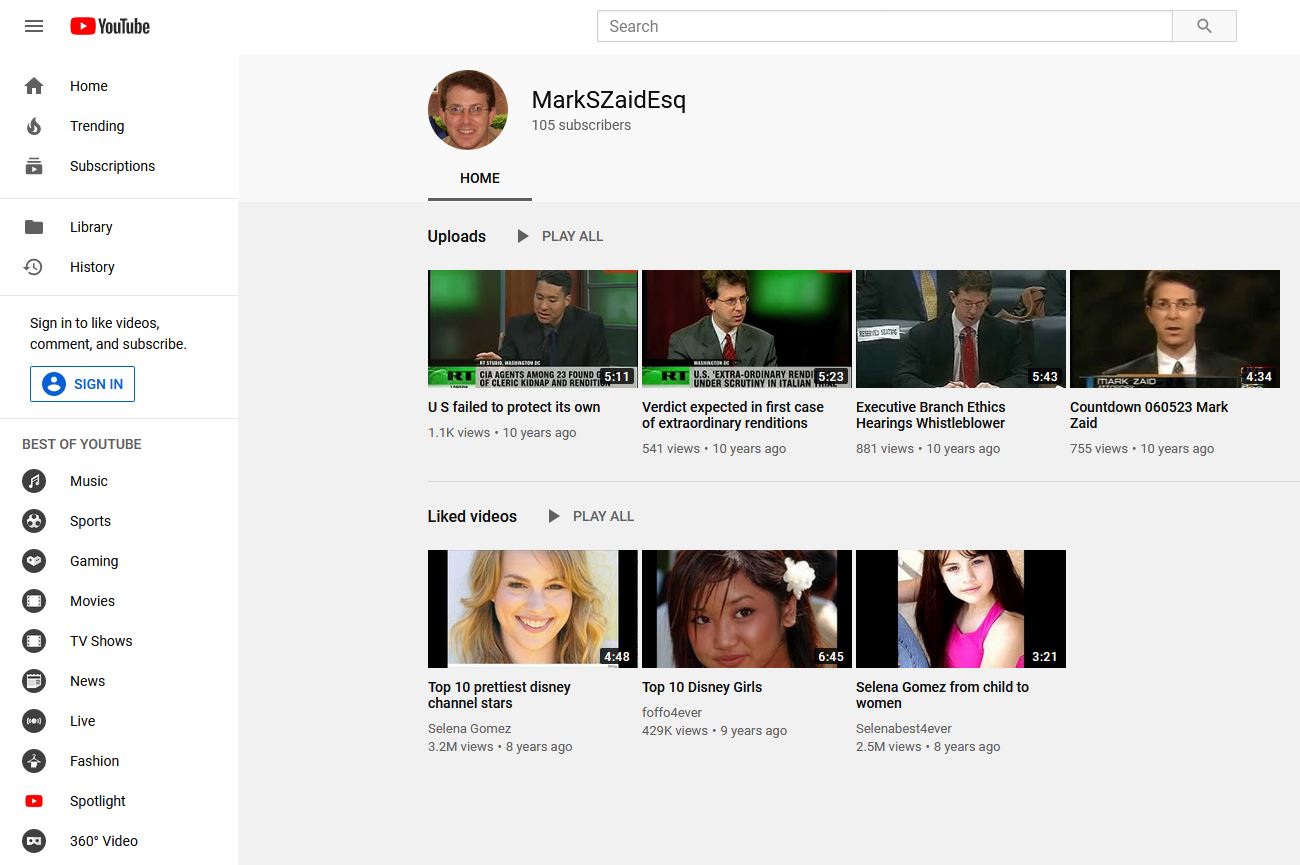 If you're at Disney World or a water park keep an eye out for this guy.

What you find down in the rabbit hole is very, very ugly.

If you want your country and culture back go after the pedophiles and their blackmail rings.
https://ka-electronics.com

Why would the whistleblower’s lawyer brag about this? https://t.co/R8Wz9s81FL
— Arthur Schwartz (@ArthurSchwartz) November 8, 2019

And while everyone is entitled to legal representation, why would Zaid, who allegedly enjoys 'Disney kids,' brag about getting clearances for pedophiles? 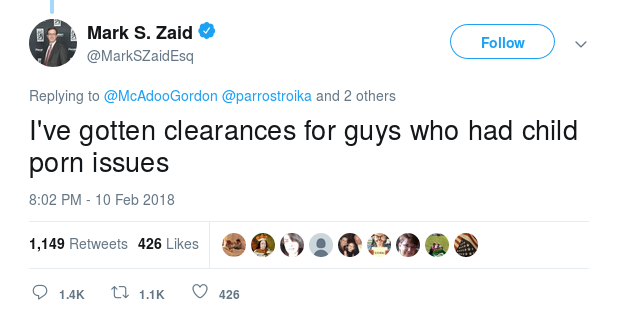 Is that Ebola, a side effect from one of your vaccines, bites from your mutant mosquitoes, maybe contact with your chem-trailing project or does that just happen after you eat a lot of dead babies? What are those things Bill? Damn you look old for your age.

I get it that you don't like Bill Gates... I dug into the accusations a little deeper.

He is clearly concerned about population growth, but his publicly stated strategy to reduce rate of population growth is to reduce the millions of preventable childhood deaths from malaria, malnutrition, and the like. When parents see a higher probability of their children surviving childhood they will stop creating so many extra spares, JIC.

Sterilizing everybody is more efficient, but really wrong.

A similar observation about the promotion of abortion for minority mothers could infer an agenda to selectively reduce that population growth.

I am not making that argument, just sayin....