How Can We Piss Off Our Customers Today? A P&G Case Study

Relax in southern comfort on the east bank of the Mississippi. You're just around the corner from Beale Street and Sun Records. Watch the ducks, throw back a few and tell us what's on your mind.
Post Reply
74 posts

Well the politicians as expected have fscked it up completely. 29th of march we leave EU and still no clue how we are going to do it. I'm ready to leave the country!
Top

It was the lead story of the 3 PM KSKY-AM newscast here.
We're very interested in this.
No confidence vote Wednesday?

You'll like Texas.
There's a house 2 doors down on a 1-1/3 acres of forest that hasn't been lived in for two years.
The Estate sold it to a couple over a year ago who have been there only a few times and never moved in.
They made improvements, she got hospitalized and I last saw her husband in August.
You might ring them up as you plan your escape.

My trips to the UK took me to Oxford, Stonesfield and Whitney.
That was 1985.
Would I recognize the country?
https://ka-electronics.com

Oxford is mostly the same. Centre hasn't changed much since 1830!

Whitney likewise, just more housing estates. Rich people like to live in that part of oxfordshire so they make sure it stays quaint.

I have fond memories of my trips to Dallas in the last 90s. A good friend did live about 5 miles from you until his wife started divorce proceedings. He's moving to California, but maintains a motorhome somewhere near you. When my posting in Chicago ended I probably could have moved to the company offices there and hung around for my green card but was homesick. Hey ho we all make mistakes

The shower in power are in a right flap. I doubt the no confidence vote will win, but its proved my view of politicians in general as people who've never had a proper job in their lives and are only in it for themselves. The few honest ones get drowned out by the career politicians. I may have to hit the gin tonight!
Top

And then there's this: https://www.zerohedge.com/news/2019-01- ... -hurt-boys
Soon, just being a man will automatically make you mentally ill.
https://ka-electronics.com

Proctor and Gamble: You're Fired!

I found that its actually quite easy to avoid Proctor and Gamble.

Today was shopping day and there were two P&G products on my list. In my effort to cutoff their financial oxygen I sought alternatives. In the end I saved money.

The Tide Pods run about $15 at the local Winco: The same number of loads of OxyClean are about $8.50.

The Meyers dryer sheets are more expensive than the Bounce but they're lavender scented. A competing brand (Church&Dwight) is about half the price of Bounce.

Ivory soap doesn't last so I'll have to see how the Meyers compares which should be a longer-lasting bar. My instincts tell me that the lemon-scented Meyers is a better value.

I've been buying Harry's Razors for a few months now. They're around $2 versus $3 or more for the Gillette. IMHO the Harrys are a better product.

Procter and Gamble is nuts if they think they can continue to sell me over-priced product and then turn around and use that money to insult me and the entire Alpha Male population. F*ck off P&G. 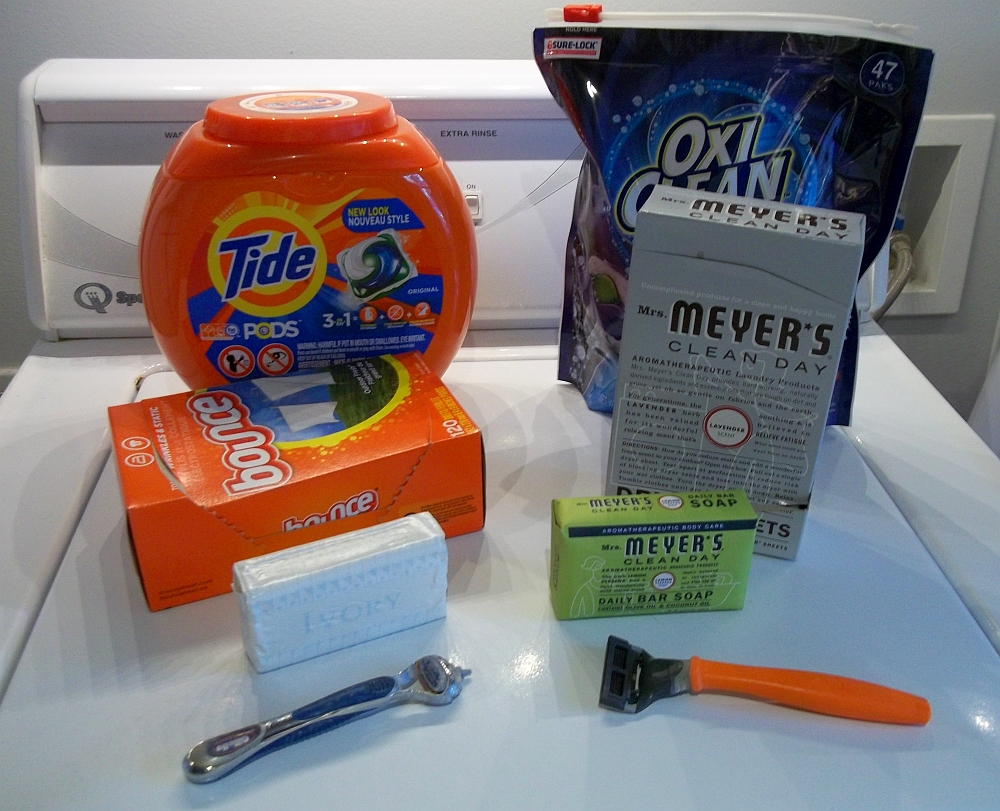 I've been buying Walmart store brands forever... It's all the same poop.

It's been at least 20 years since I set foot in a Walmart or Sams.
I walked through a Costco once.
The Winco (for Winning Company) store I shop at is employee-owned and it shows.
I don't buy much food there since I shop for produce and proteins at a local produce/health food store/green grocery.

You should try the Meyers lavender soap JR.
I opened a bar of the lavender to replace the almost-used-up Ivory bar and the whole master bedroom smells fantastic.
It's hard-milled like swanky hotel soap only bigger so it should last longer than the Ivory.
The Meyers lavender dryer sheets also smell good and I'm running a load now.

I'm going to offset my Alpha Male toxic masculinity with the smell of lavender and cutoff P&G's oxygen.
There: Problem solved.

You know the other thing that occurred to me is that they are projecting human traits - the traits of all 27 or so sexes - onto just heterosexual white men.
One analysis identified 43 acts of men behaving badly. 42 of them were white. What's your real point P&G?

In one scene you see the text bubbles and the boy bullied by other boys being hugged by his mother.

It wasn't that long ago I was comforting my young daughter because she was being bullied by her female friends.

This commercial dumps on men. What about toxic feminism?
https://ka-electronics.com

I do not shop to make political statements. (I am pretty sure I wouldn't make a difference even in my dreams.)

Walmart is a victim of social media scolds... Back last century when Peavey was trying to break into the instal business Walmart gave us a chance, against their consultant's desires and advice. The original Walton family are gone now but the sentiment was not lost on me.

As a non-alpha wuss I only get through a 10 pack of disposables every 14 months. Isn't going to affect anyones bottom line one way or another, so cheapest bulk pack costco has on offer.

Turns out I spend more on unilever products than P&G. I remember visiting one of the largest perborate plants in uk back in the 80s. Perborates are used as padding in laundry powder. There was a line of tankers waiting to fill up. one uniliver, one P&G and so on. back then literally all the same bar the coloured flecks added at the end.
Top

I do not shop to make political statements. (I am pretty sure I wouldn't make a difference even in my dreams.)

Walmart is a victim of social media scolds... Back last century when Peavey was trying to break into the instal business Walmart gave us a chance, against their consultant's desires and advice. The original Walton family are gone now but the sentiment was not lost on me.

I don't shop to make political statements either but I'm really tired of companies pushing their agendas on customers and trying to "nudge" society. Frankly I don't care what a company's politics are as long as they don't push their agenda on me. They have a right to their opinion and belief but they do not have a right to force it on me or use the wealth I've helped create to insult me if they want my continued business.

Once they do - and if they're particularly obnoxious - then I have to question if I want to fund their antics.

As I said earlier: "Any company that wants to commit brand suicide has my full support."

I don't shop Dick's Sporting Goods (never did) but they're a great example of a company pushing an agenda. Their customers stopped coming in and they're closing stores. Consumers have far more power than the companies who try this crap or the consumers themselves realize. Look at the NFL.

Provoking customers is bad business and many in management are too young, too sheltered, too indoctrinated and brainwashed to grasp that simple concept. A life-lesson is badly needed.

These companies need to realize that offending customers does have consequences. Many are so self-absorbed they don't realize consumers do have options and think we are beholden to them. Giving them that wake-up call is doing them a service. Continuing to buy presents symptoms of Stockholm Syndrome.

I don't have issues with WalMart particularly the Walton family. What I don't like about WalMart are the customers and merchandise. Their parking lots are becoming third world and I wouldn't touch their depopulation foods. WalMarts in rural America have a different customer base than the "EBT" customers we have in the city. Its a completely different shopping experience.

The Winco I shop at was once a WalMart. I have a friend who is an appraiser and he was at the WalMart (now Winco) site as it was being built. As he's there this old beat-up pickup truck with Arkansas plates pulls up. Sam Walton steps out. Wished I could have been there. Sam was a very hands-on guy to have driven that beat-up truck from Arkansas to Duncanville Texas just to check on the work.

The market I now use for food and produce is being run by the next generation Sam Walton. Over 20 years he's grown from produce stand to having two stores and a nursery. When I shop there I know I'm shopping at a place that cares about its business and customers. His slogan: "Good produce ain't cheap. Cheap produce ain't good."

When I do shop there I'm not funding the whims of some sociopathic CEO who might be a pedophile or Satan worshipping iguana eater who is not acting in the best interest of the company, product, customer or employee.
https://ka-electronics.com