Relax in southern comfort on the east bank of the Mississippi. You're just around the corner from Beale Street and Sun Records. Watch the ducks, throw back a few and tell us what's on your mind.
Post Reply
1111 posts

I shared that entropy ate my car's fan belt a couple weeks back... I decided it might be a good idea to proactively replace my radiator hoses that are just as old. As usual easier to think about than do. I still need to purchase some more hoses but after replacing the first one, I fell better, it was still in pretty good shape.

I decided to replace my temperature sending units, my motor has two. When cold before warming up my car bogs and surges, as if it isn't getting any extra gas, modern version of choke. Since the dashboard temp gauge works properly, I suspect the second temp sensor is feeding the ECU and faulty.

Letting my fingers do the walking I tried to research if my car uses two different sensors or two of the same... no luck, but I found a $15 sensor listed as fitting my model motor so I ordered two...

The first one was relatively easy to access and after i swapped it there was no difference. The second sensor (on driver side head) was much harder to get out. I finally had to purchase a crowfoot socket with universal joint... That was able to get the old one out but cocked up and broke it. No problem since I planned to replace it. 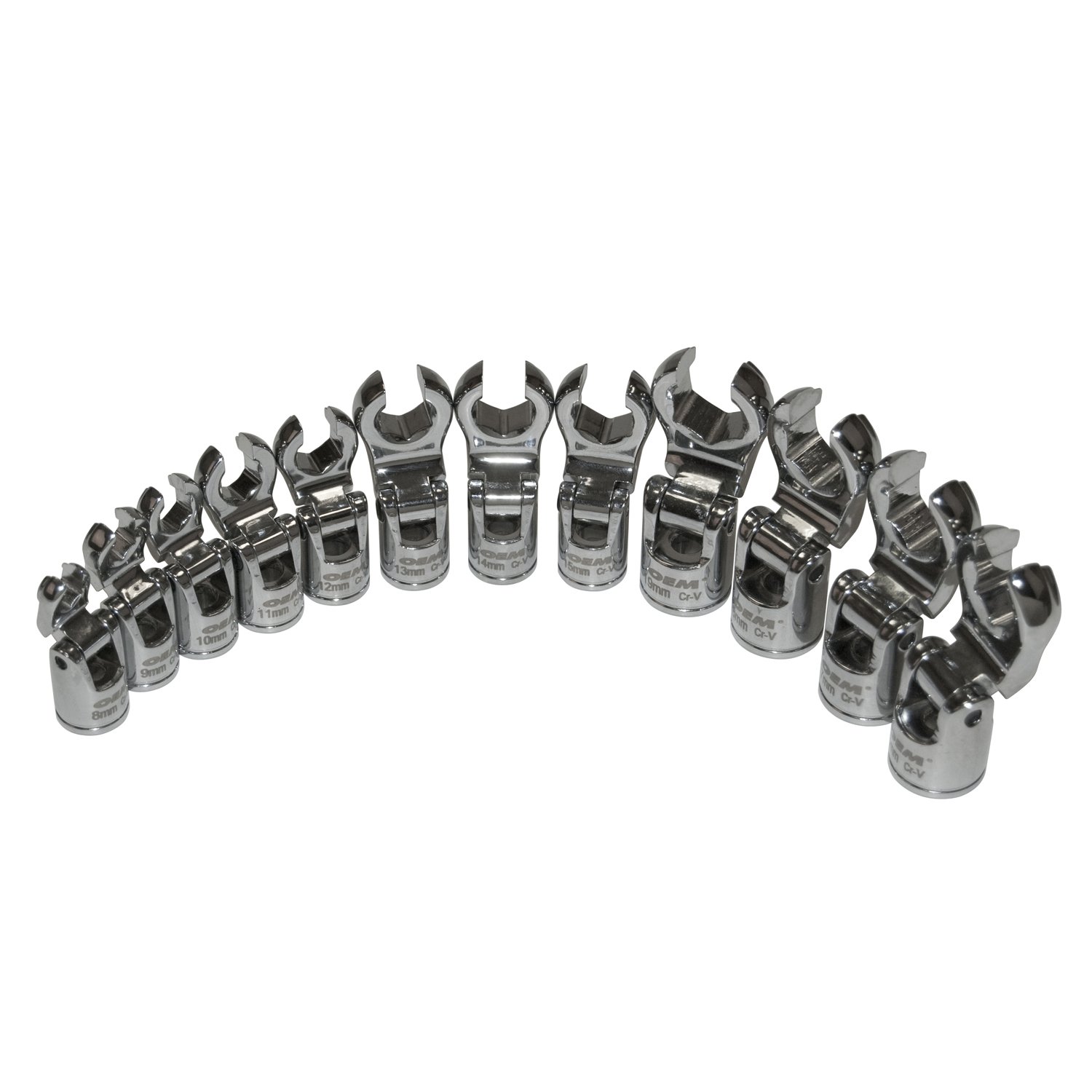 I put some permatex on the threads and tried to start the new one in, it was so hard to get too (tight front of engine) I inadvertently dropped it behind the alternator.

This catches us up to a few days ago. I decided to remove the alternator to improve my access to the front of the motor. After having to wait two days for metric sockets, I was still unsuccessful at completely removing the alternator, but unbolted I was able to move it aside. I retrieved the wandering temp sensor and installed it, before securing the alternator again I decided to attach the electrical connector to the second sensor and it wouldn't plug up. The electrical connector is indexed differently so back to the drawing board.

I found a replacement temp sensor with the right connector. This one cost $53 so almost 4x the other ones. The good news it makes it easier to pay for rush delivery of the more expensive part... It is due in today, so I can back on plan, but this simple sensor swap has turned into a major PIA.

More later... hopefully there will be no more unexpected gotchas.

PS: FWIW The temp sensors are 3/4" while alternator bolts are 10mm

Humpty went back together easier than he was to take apart...

Not a definitive test since it was 70' but much better behaved from a cold start, so my thesis of bad engine temp data to ECU seems to hold water.

May be time to sell humpty to a new owner that loves him more than me...

Lately I've been getting one driveway drop-in a week asking if I'd sell it. Maybe because I was always out working in my yard (on my rain ditches).

[edit] I ordered a random assortment of metric flare nuts to replace the one I dropped and lost. Another lifetime supply of spares. [edit]

[edit2] today I did my thursday shopping trip hours earlier to get a cold temperature test to see if my new temp sending units fixed the cold weather roughness... Short answer it did... so it appears my diagnosis was correct.

[edit3] nuts arrived this AM and alternator is now fully secured...

Of course I dropped another nut so next owner will get spares.

OK fixed it, a simple spring in compression works. I had to double up the standard spring to get enough return force, and you can still see the old broken spring (really hard to cut... which may say something about spring's brittleness).

I used cable ties to attach the valve actuation lever to the spring so not a pretty fix... I tried a flat washer on top of the spring but it gets cocked at an angle and drags, locking up.

The dealer I bought this bottle washer from generously gave me a replacement free when this broke the first time last year. Well the free replacement just broke again, same spring failure at the exact same place.

This picture is my proof of concept using a coil spring in compression, instead of the tiny spring used in torsion mode. You can see the broken old torsion mode spring still hanging from the valve arm.

Since I became email buddies with the bottle washer manufacturer customer service guy, I yanked his chain again, asking if they would provide spare springs so I could repair my now two broken washers (no response to that so far).

He proudly declared that they upgraded the stock spring to deliver 15,000 cycles, surely that would be enough for me.

I shared some quick back of the envelope math quantifying some 10,000 cycles per year from my typical bottle washing routine, giving his new improved bottle washer a life expectancy of only 18 months.

The first generation springs obviously less than that.

I haven't heard from him since sharing my life expectancy math.

1- Using a larger diameter coil in torsion mode would reduce the angular travel per cycle for lower fatigue stress, albeit only incremental improvement.

2- coil spring in compression like my proof of concept, but better execution in valve arm attachment to not bind up.

3- coil spring in extension mode, pulling the valve arm back up toward top of outlet tube.

4- perhaps grab coil spring in middle so spring operates in both compression and extension modes at the same time.

The shame is this is the best bottle washer I have found, when it isn't broken. Too nice in other aspects to be disposable.

My yard is slowly drying out, for now at least.

The water has stopped flowing down my front ditch, but back ditch is still flowing some water (hasn't been dry since last summer).

The brim in my front rain ditch need to be careful if the water ever stops coming. I thought i saw brim trying to swim up my drain pipe, and sure enough, this morning I saw at least one brim swimming in my back drain box silt pool... he must be part salmon to swim several inches uphill and against the flow.

Argh I hate disposable products... My cheap hand pump sprayer, just broke it's seal/gasket after probably less than 2 years in service, so doesn't hold pressure any more. Replacement gasket sets A) may not fit, and B) cost almost as much as a new replacement sprayer.

I had to look up 'Brim'. over here we call them 'bream'. Now less confused. Seems everything else in the river eats them, which is why they are swimming up the pipe. They may also help keep mosquito larvae down, so don't discourage them.

Suprised you cant pick up 2" 0-rings at a plumbers. Surely home despot or its ilk will have packs of 5 for almost as much as 100 from McMC?
Top

billshurv wrote: ↑
Wed Mar 27, 2019 3:58 pm
I had to look up 'Brim'. over here we call them 'bream'. Now less confused. Seems everything else in the river eats them, which is why they are swimming up the pipe. They may also help keep mosquito larvae down, so don't discourage them.

They apparently have many names

Suprised you cant pick up 2" 0-rings at a plumbers. Surely home despot or its ilk will have packs of 5 for almost as much as 100 from McMC?

Plumbers are not a place here, but expensive professionals you call.

The closest home Depot is maybe 50-60 miles away. Lowes (similar merchant) is closer only 20 miles in other direction.

Tomorrow I will look at wally world where I bought the sprayer, when I do my weekly food shopping. I vaguely recall a spare o-ring in the box when the sprayer was new, but have no idea where I might have put that.

Kind of annoying, when I try to search, on amazon (Waynes favorite), the feature bullet point list for new $11 sprayers highlight replaceable seals... but don't offer to sell the F'n replacements.

edit- 2" looks like the OD so ID is smaller... but there are many O-rings... /edit
Don't only half-ass tune your drums. Visit https://circularscience.com to hear what properly "cleared" drums sound like.
Top

I was being lazy. I did mean plumbers merchants, but then realised that was probably a very British thing. But I do remember home despot and was amazed you could by a house kit there and have it delivered.
Top PS: I knew you meant "Plumber's (supply)"... but we don't have stores dedicated to just plumbing stuff, large stores have a plumbing aisle.
Don't only half-ass tune your drums. Visit https://circularscience.com to hear what properly "cleared" drums sound like.
Top

, and dropped a ton or so of branches from my other pines that were stealing sunlight from my pecans.

I negotiated a $500 cheaper price by offering to clear the branches myself (I had him pick up the one heavy tree trunk). I got a few hours of clearing in yesterday before the rain, and I will definitely earn that $500.

More wood than it looks like in the picture.

The rain put out my burn pile fire and yard is probably too soft for me to hump the heavy logs (up to 6" diameter branches) with my wheelbarrow today, but I am itching to get back at it.

The tree guy was able to cut all that with his bucket truck parked on the paved side road (he was able to work around the low voltage power line 240V). We lost only a few pecan branches which is good work because the leaner was pointed right at and already over one of my pecan trees. He topped the pine before dropping the rest of it. Even thought it doesn't look very big compared to the other old pines, it was big enough.

The first tree guy I talked to who never gave me a quote and kept asking me what my budget is stopped by for an uncomfortable conversation.

The huge twin for my 100' tall cottonwood (that fell over a decade ago), behind the store next door is dying and dropping huge limbs... That could end badly for the store. I gave them a business card for my good tree guy but I predict they are even cheaper than me...I saw yet a different guy with a small bucket truck messing with the dying cottonwood this morning but I doubt he has enough rig for the gig. Maybe he could drop some limbs in place, but cutting old dead trees can be tricky (I hear).

PS: I knew you meant "Plumber's (supply)"... but we don't have stores dedicated to just plumbing stuff, large stores have a plumbing aisle.