Where we discuss new analog design ideas for Pro Audio and modern spins on vintage ones.
Post Reply
265 posts

Paul - I don't think I've ever seen one measure worse than about -65 dB on a full encode/decode through the inserts.

Here's an experiment you can try to isolate whether its the encoder or decoder:

Repeat for the decoder the same process.
Flipping the polarity of Side relative to Mid at the insert return will steer the output from L to R.
https://ka-electronics.com

I'm going to bag this for now. I have things higher up on the list that need attention.
Top

OK if you're getting -70 in the normal encode/decode configuration I doubt there's a construction error.

When they're reversed, the gain error in the adjustable mode is enough to degrade it.
I would add a trim.
https://ka-electronics.com

mediatechnology wrote: ↑
Sun Jan 15, 2012 9:46 am
How did you do the decoders with THAT1246's?
I've done it before and it requires some tricks since the internal resistors do not have equal value.
It added stages so I chose an alternate method

Hello Wayne and the forum . Thank you again for hosting this forum where conversations like this can exist.

Say you are very determined to use THAT1243's in the encoding and decoding stages.

What tricks would you say the highest performing M/S encoder decoder circuits, of this topology, attempting to use THAT1243's, would incorporate?

I have noticed that impedance mismatches, between the encoder/decoder circuit inputs, imbalances upstream circuitry.

Like it sounds like you do in your M/S MAtrix product, I have tried keeping the upstream circuitry isolated from the encoder/decoder's with buffers.

I have yet to come to terms with the best way, or how necessary is it, to ensure balanced loading of the outputs of these buffers in achieving the most mathematically correct circuit implementation. Maybe a (un?)loading resistor on the buffer output, but inside the feedback loop, for the buffers experiencing smaller loads.

Maybe therer is a better way to do it than "buffering" ?
Top

I don't believe unequal loading of the buffers feeding the input resistors has that much effect on crosstalk from a practical point of view.

The closed loop output impedance of the buffers is in the milli-Ohm range which is about an order of magnitude less than the actual resistive mismatch of the laser trimmed resistors. (About 0.5Ω)
The largest source of error, end-to-end, is the gain error of the THAT1646 output stage and devices used in the insert.

When the matrix is fed end-to-end with the THAT1646 bypassed the crosstalk is close to the datasheet common mode rejection of the THAT1240 itself.
The encode/decode errors accumulate but 70-80 dB crosstalk is not uncommon.

The resistors used in the THAT1200-series have a +/-20% tolerance: Laser trimming adjusts their ratios to 0.005% but not their absolute values.
One 1240 used for summation may be off by 40% compared to a 1240 used to difference the signal.

If one were to insert trims to improve this further it's tempco would likely degrade crosstalk as temperature changes.
The tempcos of the resistors on the 1240 track.

I've never looked at or considered using a 1243.
In the MSII I do use a combination of 1240/1246 to provide gain offset capability.
https://ka-electronics.com

Thanks for the tips.

Using THAT1243's in both the encode and decode makes the math work perfectly.

It makes a differential version of the encode and decode seem really clean and nice.

You still gotta buffer the inputs though. And you have to do a single ended conversion for the filtering..... And a differential conversion after filtering... 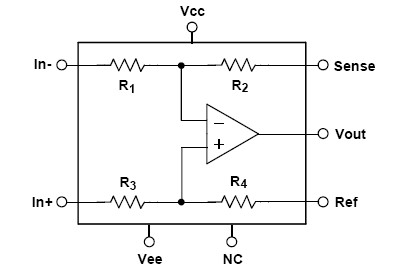 In the original MS in this post when mono signals are input there is 6 dB gain in the L+R stage.
To avoid that have a look here: viewtopic.php?f=6&t=935
I used more than one of those trick circuits in the MSII.

If you want to sum L+R using R1 and R3 using an inverted copy of one of the inputs you can.
But you need to know that if you introduce a polarity inversion stage that is present in one path but not the other its phase delay will reduce crosstalk.
https://ka-electronics.com

perhaps I have overlooked something.

I found these formulas in a Sound on Sound article

If you want to sum L+R using R1 and R3 using an inverted copy of one of the inputs you can.

But why sum L+R with only 3 dB attenuation?
Ideally you'd want 6 dB attenuation to maximize headroom in Mid.
https://ka-electronics.com

In my case I did not want to sacrifice noise margin (Edit: uh SNR) and so talked myself out of the 1246's in the encode. Also I am coming up against rail voltages and 1240's would have put me over when my designs overload margin is considered. Even with the 1243's my current concept still utilizing a +/-32V rails for the single ended stuff.

I have told you I sit around drag racing various versions of my concepts on LTspice all day and never actually build anything , didn't I?

By the way, would you like to hear about my concept for the vertical noise monitoring? Ie useful for listening to the deleted info to try and discern if there is still music and you should choose a lower frequency? I think I realized a good way to do it.
Top
Post Reply
265 posts