"The new normal" is bullshit.
https://www.proaudiodesignforum.com/forum/php/

by terkio
Self-heating is made x10 lower in the Ian Fritz matching gig, where Vce is 1.2V instead of the 12V supply.

by mediatechnology
I originally used a higher Vce than Ian's so that it would be more similar to what Vce would be in the preamp. (About 6V.)
Since I've lowered Ie to reduce settling time I should probably lower Vce.
From what I'm seeing matching at lower currents yields about the same results at higher currents only faster.

I found a clamp I can use during test to thermally couple them.
Its a paper binder clip.
Makes a big difference.

I also decided to use the Aries ZIF socket.
That provides far more consistent results.

by mediatechnology
I'm finding that the test socket is critical: As I expected contact resistance in the emitter can produce large errors.
For a 1.5 mA Ie test current the contact resistance has to be under 10 mΩ (that's 0.01Ω) for the error to be less than 15 uV.
This makes an even stronger case for a 150 uA test current.

The Aries socket seems to have solved the contact resistance problem though there still are occasional changes when the pair is swapped in the test socket.
Re-seating the DUT and re-latching the socket seems to help that.
If I get a good matching pair I swap their positions to perform a reality check.

I'm also finding that if a pair matches well at 150 uA it is also going to match well at 1.5 mA and hopefully the 5.5 mA of the MC preamp.
I can vary Ie significantly as well as Vce and obtain near-identical Vos measurements.

I did find the delta-Rds between switch sections is not a significant source of error.
If I swap the base leads of the DUT with a low Vos device (<<100uV) I don't see changes in measurement.
Thinking about it more, if one switch is 15Ω (at 0V) and the other is 16Ω the difference is 1Ω. If Ie is 150 uA and hFE 100 then the Vos error from the difference in RdsOn is 3µV.

I added some utility outputs that have proven useful.
The outputs are a 1.5 mV calibration signal at 1/10,000th the supply voltage, a sync signal coincident with Q1 conduction, a smoothed average Vbe reading, and finally the AC-coupled delta-Vbe output.

The 1.5 mV calibration signal is used to set the A/D converter gain for FFT measurements of Vos.

The sync signal, which is active when Q1 conducts, is useful to check and see if Q2 is more positive or negative than Q1.
This assists binning.

The smoothed average Vbe, which is subject to the Vos of the OP07, is used to set the cutoff voltage.
I had previously used the emitter node: Buffering the measurement node and smoothing the stepped waveform there provides for very low transients during switching.
An auxiliary output is available to read the average Vbe of the pair.

A second non-averaged AC-coupled output from the OP07 is used to read the delta-Vbe as an AC waveform.

Once I finish tweaking I'll post a work-in-progress schematic.

mediatechnology wrote: ↑
Thu Dec 19, 2019 8:02 pm
The smoothed average Vbe, which is subject to the Vos of the OP07, is used to set the cutoff voltage.
I had previously used the emitter node.

To turn the transistors off, I suggest, you switch the bases at a -1.2V node.
This gives a Vbe reverse biais, a best way to block a BJT. This way was a must at the time of germanium transistors.

To turn the transistors off, I suggest, you switch the bases at a -1.2V node.

Not a bad idea.
I've tried varying just about every voltage and current to see what influences measurement and cutoff voltage, as long as it's equal to Ve or less, isn't one.
In fact the only parameter that skews results, other than the transistor, is emitter resistance of the test socket.
So I went with a Vb = Ve to set cutoff.

To turn the transistors off, I suggest, you switch the bases at a -1.2V node.

I decided to directly measure this.

The main thing about the Vbase(off) reference is that it have low AC-impedance...

I think at least with these transistors and currents making Vbase(off) equal to Ve will work just fine.
That way, to switch polarities, I won't have to switch a third parameter - I only have to switch Vc and Ve's polarity.

The three big measurement advances since I began testing the approach are:

1) Minimizing emitter contact resistance and its effects in the test socket. (Better socket, lower Ie.)
2) Establishing a precise 50% duty cycle to equalize self-heating.
3) Using a paper binding clasp to thermally couple the DUT in the test socket. (in addition to putting them under a bubble-wrap insulating blanket.)

With the binding clasp in place I don't have the thermal settling time to deal with so varying Vce from +0.6 to +15V doesn't make much difference either.

BTW I got my ebay "Textool" sockets which appear to be totally counterfeit down to the "3M" in the molding. I got suspicious when the two of them came in Chinese packaging from a US seller. They'll probably work fine but I think I'm going to buy a couple of the "real McCoy" Textools from Digi-Key which are gold-plated. With the two I have priced at around $8 ($4 ea including shipping) I'm not complaining. DIgi-Key's Textools are around $18 US.

by mediatechnology
This is going to work out.
Out of 18 pairs of devices I was able to get 15 matched pairs.
Most are well under 500 µV none above 1 mV.
I have a few that are near-perfect matches <<100µV.

With one of the near-perfect pairs I switched Ie from 150 µA to 1.5 mA.
There wasn't any significant measurement change with a low approximately 2V Vc.
As I increased Vce to 15.6V I could see Vos grow when Ie was 1.5 mA.
The Vos error eventually recovered as the DUT's heat equalized through the binder clip heatsink/spreader.
With Ie at 150 µA varying Vce had no effect.
There does appear to be some self-heating at 1.5 mA and Vce 15V that increases test time.

I'm not planning on using 1.5 mA due to contact resistance but I do want to current limit Ic in the event a device is inserted backwards.
I'll likely add a series resistor/shunt regulator to set Vc to 5V.

Six devices wouldn't match. The worst spread was 14 mV.
This is an oscillogram of the 14 mV pair showing the sync signal on the bottom and the 14 mV delta-Vbe on the top trace.
Q1 is 14mV more negative than Q2.
At levels below 1 mV an FFT is used to read Vos down to the 10 uV range. 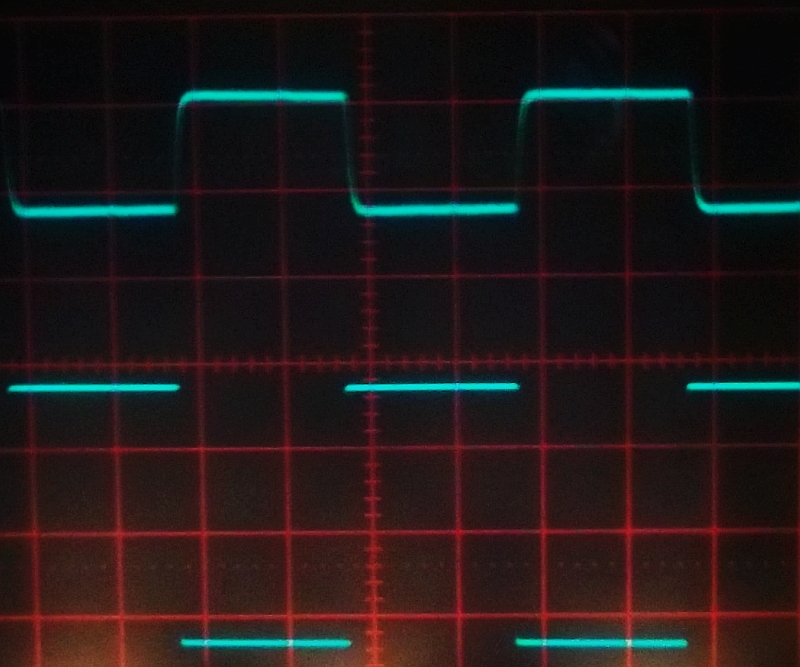 I'm not planning on using 1.5 mA due to contact resistance but I do want to current limit Ic in the event a device is inserted backwards.

I would not worry about inserting backward.
Edit: With supply voltage not too high: Base Emitter breakdown voltage is given as 8V typical, 6V minimum.
The pinout is ebc, so swapping emitter and collector does not damage the transistor, this NPN transistor becomes another NPN transistor with reverse characteristics as can be seen in BJT Spice parameters.
Reversing was a trick in early choppers to get lower Vsat, with the drawback of a poor Hfe.

Thanks for the statistics on a batch of ZTX851.

I would not worry about inserting backward.

I found a situation where the DUT could be inserted incorrectly and they do get hot.
So not physically backwards but electrically there is a backward junction in breakdown.
I didn't check what configuration the device was in - I'm smart enough to know that I don't want enough current to develop for this to happen again.
Using a lower Vce with a shunt regulator (e.g. diode) like Ian's jig solves that problem rather than an "unlimited" current 15V supply.

I do sometimes accidentally check the hFE with the DUT inserted backwards - they have a current gain around 20-30.
I use the Fluke in conductance mode to check hFE: https://proaudiodesignforum.com/forum/p ... 755&p=8825

by mediatechnology
This is the latest schematic for the Commutating Transistor Vbe Matcher.

I haven't added the NPN/PNP switching to the actual prototype.
If someone were to build this for only one polarity device the bipolar electrolytics could be changed to polarized.
I used an OP07 for the follower so that the average Vbe could be measured with millivolt accuracy.
Someone not needing average Vbe could use a TL071 provided that precautions against voltage follower latch-up were added.

A 1.5 mV (1/10,000th the supply) is used as a calibration reference for soundcard gain adjustment.
A 15 V P-P sync output, coincident with Q1 conduction, is used as a 'scope trigger.

The delta-Vbe of the pair is directly read as an AC component and fed to the Soundcard for A/D conversion.