Where we discuss new analog design ideas for Pro Audio and modern spins on vintage ones.
Post Reply
23 posts

Here's an Ideas for Design Article by Dimitri Danyuk published in the March 26, 2010 issue of Electronic Design. It's a modified version of the Schoeps circuit that, according to the author, provides improved performance with long cable loads. It appears very clever.

Typically, the microphone should incorporate a signal-splitting circuit—dc blocking capacitors or a transformer—to separate the phantom power from the audio signals. The capacitors/transformer pass the audio on the differential pair while blocking dc power. The designer must select components that do this without degrading the audio signal.

Another approach used in variations for some time now, the Shoeps circuit (Fig. 1), employs the 6.81-kΩ resistors—Rf1 and Rf2—as load resistors for direct-coupled emitter followers with pnp transistors Q2 and Q3.2 The input amplifier stage uses a JFET (Q1) with a very high input impedance.

The input stage not only acts as an impedance converter for the cartridge, it also performs phase-splitting, turning the input signal from the cartridge into two paraphase outputs. The output stages act as current amplifiers with a unity voltage gain.

The addition of npn emitter followers Q4 and Q5 speeds up the charging of the cable capacitance, eliminating this slew-rate limiting and lowering total harmonic distortion (THD). Figure 2 compares the two techniques. The square nonlinearity of the impedance converter JFET causes the gradual rise of distortion with the input amplitude. 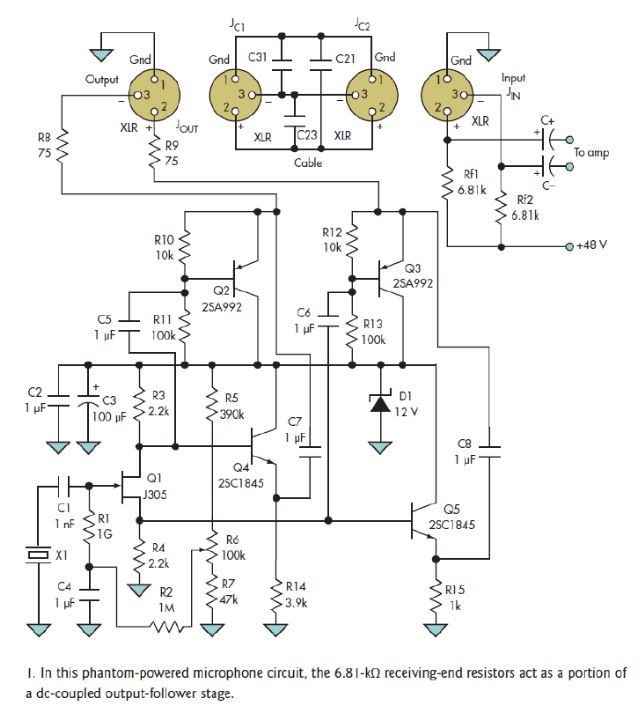 Lots of parts to make what is essentially a unity buffer (OK + 6dB with signal splitter). I'd be tempted to use less I uF caps, and maybe throw in some voltage gain, but I don't know how hot that capsule output is.

Worth looking at, not sure it's worth copying... I played around with phantom powered DI's that were far simpler, but I wan't trying to drive a long line with a lot of capacitance.

In general the nominal operating impedance 200 || 2k is low enough that it can tolerate a bunch of capacitance before degrading audio bandpass.

Of course just one opinion.. thanx for the heads up.

Edit- upon reflection my comments were a little harsh... The discrete circuitry uses techniques that are useful to understand... /edit
Don't only half-ass tune your drums. Visit https://circularscience.com to hear what properly "cleared" drums sound like.
Top

JR. wrote:
Worth looking at, not sure it's worth copying... I played around with phantom powered DI's that were far simpler, but I wan't trying to drive a long line with a lot of capacitance.

Were you able to view the THD comparisons vs. Cload? The figures in the online version don't exactly jump off the page. I think you'll find a lot of capsules than can easily exceed 500 mV at the mic output with a unity gain buffer. It's suprising but true.

Think we could get some real-world peak measurments? bruno2000?
https://ka-electronics.com

The designs I did, typically delivered a differential AC current output and relied upon a real resistor hanging between pins 2/3 effectively in parallel with the 2k or so mic input termination to convert that current to a voltage... Increasing C load, just shifted the LPF pole frequency downward.

The article's analysis that a simple single polarity emitter follower will deliver an asymmetrical slew rate is surely true in the limit, if the follower runs out of current, but in practice depends on the amplitude, edge rate of the audio signal, the series output resistance, C Load, and current density or operating current of the emitter follower.

Without seeing the original design I can't comment on what was changed from the original circuit. I suspect using just the PNP followers alone as drawn, would be significantly better than just the NPN followers alone. If the PNP followers biased up with most of the available phantom current, still run out of drive current because of a hot capsule voltage swing, perhaps it's time to increase the value of the 75 ohms series build out resistors. The noise floor of this preamp will already be higher than 150 ohms, so the only negative consideration arguing against increasing these is noise current of the following mic preamp input, working into this source impedance.

JR. wrote:
Worth looking at, not sure it's worth copying... I played around with phantom powered DI's that were far simpler, but I wan't trying to drive a long line with a lot of capacitance.

Were you able to view the THD comparisons vs. Cload? The figures in the online version don't exactly jump off the page. I think you'll find a lot of capsules than can easily exceed 500 mV at the mic output with a unity gain buffer. It's suprising but true.

Think we could get some real-world peak measurments? bruno2000?

Sure, I have some Schoeps mics as well as some popular others. Please describe the measurements you would like.
Best,
Bruno2000
The large print giveth, and the small print taketh away - Tom Waits
Top

bruno2000: Sorry for the delay in responding.

What I'd like to know is what are the peak output levels, measured with an oscilloscope, under high SPL for really hot mics. What's the highest output/hotest mic you've encountered in a live setting?
https://ka-electronics.com

Will do, although probably not until next week. You are right, the Schoeps are about the hottest, although I think that the Shure SM98 about 2" from a tom head is pretty hot too. Do you want me to check a transient (like a wood block) or something continuous (leaf blower, table saw, etc.)?
Best,
Bruno2000
The large print giveth, and the small print taketh away - Tom Waits
Top

I like the wood block or Tom head transient. A chainsaw would be more fun though. (I've been enjoying mine a lot lately after our 13+" of snow back in February.)

I'm thinkin' the SM98 and Schoeps terminated in something like 2K Ohms. Although it would be nice to AC-couple the 'scope input (and AC-couple ground) directly to pins 2 to 3 that probably wouldn't work well. You might need a 1:1 transformer or preamp such as the 12-pack at known unity gain.

If there was a way to calibrate a workstation to Volts that would be better than the scope, but I suspect that a 'scope would be OK to capture a rough estimate of the peak level.

There's been this question lately about "What is an acceptable maximum overload level for a mic input?" We might be really suprised at how hot these things are.
https://ka-electronics.com

I remember Pro Audio Review looking at this question maybe a decade back, and I think their hottest discovery at the time was a TLM103, at something like +13 dBm. Of the preamps they were trying, only the Mackie was capable of dealing with full scale output. There were not a lot of preamps or mics on the list in the first place. I think my Sytek probably has the highest input headroom, at roughly +12dBm. There are plenty of situations where I can't use it with certain mics, since it has no pad.
Best,

While this is just an anecdote.. I recall back when the Mackie 8 bus was popular, having to design an add on pad to help our service guys, so Peavey customers could plug the output from their VMP-2 (tube mic pre) into the Mackie input. It was too hot for the Mackie line input and the Mackie didn't have a pad switch... I think Greg may have mentioned in passing during one of his trade show booth visits, that leaving it out was a mistake, and Uli copied "his" mistake.

So perhaps the lack of pad switch would lead one to target a higher peak input capability nominally.

There are practical limits to how much peak signal the better topologies can handle at their raw inputs and deliver good performance. With a pad you are only limited by your calculations.

The theoretical limit to what kind of peak we might get from a phantom powered circuit, perhaps 22V p-p or so open collector, and as much as a couple times that, short term using PS storage caps and active output drivers. FWIW