Working harder than ever to lower our Google search rank.

I see now what I was missing. I have to build a separate flying rail block for each channel and than it will work properly. I somehow thought that I'll power all channels from one flying rail generator...

Now you got it! Yes, the flying rail circuit is in every input module.

In your scenario where some other device provides the phantom you would not want the phantom switch on this device to back-ground the 6K81 resistors since they would load the other source of phantom.
The ground connection for the switch could be made an optional link.
The choice of back-grounding or not back-grounding exists in any preamp.
https://ka-electronics.com

mediatechnology wrote: In your scenario where some other device provides the phantom you would not want the phantom switch on this device to back-ground the 6K81 resistors since they would load the other source of phantom.
The ground connection for the switch could be made an optional link.
The choice of back-grounding or not back-grounding exists in any preamp.

Thanks! Haven't thought about this grounding issue. Really useful tip.

Now, speaking about digital control, what are suggested ways of connecting several pres to USB? I saw that you used DLP232 (which is also used on the demo board).
Can you point me in the right direction regarding control via USB? I can code, so I believe software part would be less problematic for me. But digital electronics is, as we say, "a dark forest" for me now. Can you suggest some good reading for starters?
Top

I used a DLP232 from a demo board which THAT had coded for the 5173.
I'm also using their Mic Preamp Demo software.
Coding is an area where I would need help.

Although I could use a rotary gain switch with only 24 positions available I can only get 2.5 dB/step.
Keeping the gain leads quiet can be done even with longer leads but it's an extra op-amp to drive the shield.

The THAT5173 provides 3 dB steps so in terms of step size it's not too much larger than a switch but a lot cheaper than a Goldpoint.

For my application I think I want shaft-encoded knobs and buttons controlling a 5173.
Alex (promixe) developed modules and sold them from the Innersonix website: http://diy.innersonix.com/
I hope Alex can recode the front panel controller for the 5173 and build some more front panels. I could use them.

To answer your USB question the data sheet for the 5173 shows how multiple devices can be controlled from a single SPI port: http://www.thatcorp.com/datashts/THAT_5 ... pdf#page=8
One thing I found with USB is the need to ground-isolate the USB port/controller (DLP232) from audio ground.
Ground isolation is required in the floating preamp but I've found it's difficult to get quiet non-isolated USB control under any circumstances without in-band spurs due to the USB polling rate around 1 kHz.
https://ka-electronics.com

I'm looking at 1606 line drivers. What do you think, is it sufficient to implement circuit from figures 7 and 8 in the datasheet (http://www.thatcorp.com/datashts/THAT_1 ... asheet.pdf) and put this after 1246s?
Top

You can also use a pair of 1606's and cross-couple the 1606 inputs and parallel (also cross-coupled) the outputs. This doubles the drive current and has 3 dB less noise in the output stage.
I've also tried this.

Another option is to use the Dual Class-A output board with it's 1246 inputs cross-coupled: viewtopic.php?f=7&t=509
https://ka-electronics.com

Ok. I think I need to tell more about my project.
I'm going to put 8 channels of these pres into 1RU enclosure. I'm planning to power the units from external PSU and also be able to daisy-chain several units so they can be powered from one PSU.
Sooo...
I have several goals in mind. First: minimal component count to reduce power comsumption. Second: well, minimum component count to reduce cost

Thanks for the link to the Class-A boards. They look really cool, but are way overkill for what I'm looking for. What do you think, is it too bad f I take the output from 1246s and bring them to the real world without any drivers? Or do I have to put anything after them? If so, what would you recommend?

You said that 1606s CMRR is around 70 dB. How does that compare to 1246s CMRR in your configuration?
Top

You wouldn't want to have the 1246 drive line outputs directly since they have a 2K minimum load for full output.
You could however use THAT1286 in SMT and they will drive 600R directly.
2X THAT1286 in a cross-coupled configuration will provide +27 dBu output using +/-15V rails.

With 8 units packed into a 1U I can see why you wouldn't want to use the dual class-A due to heat and heat sink size.

Pro Audio Design Forum member Dimitri sent me a link to a 1989 citation that I had never seen.


A new design for a microphone preamplifier is presented in which the differential gain is flat to dc, at the same time rejecting a large common mode voltage. 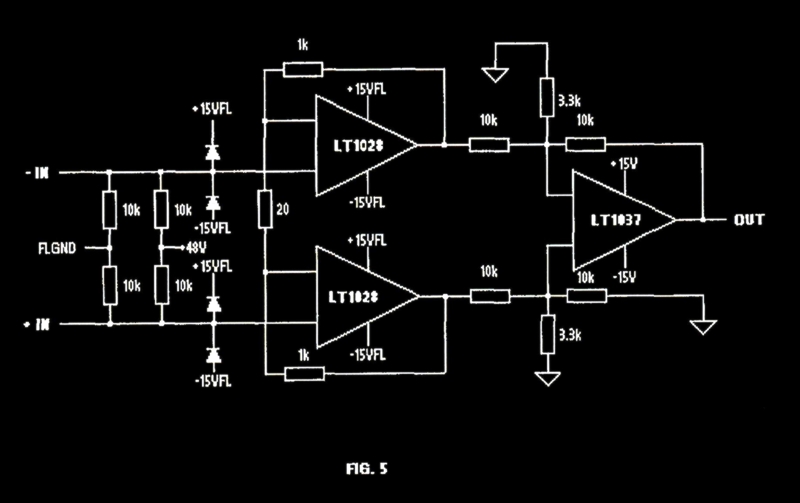 The author does not say if he actually built one but the technique he proposes of using a floating power supply precedes my 2006 idea by 17 years. His 1989 rationale for floating rails were the same as mine: Good low-noise high-voltage transistors or op amps are made of unobtainium. Figure 5 is the final figure. This paper provides a good a proof-of-concept and the author may have continued developing it beyond what is shown here.

It may also explain why many industry veterans have dismissed the idea as unworkable: If figure 5 is taken literally and gain is permitted flat to DC, then mic current imbalance errors will create offsets multiplied by gain. I'm pretty sure this occurred to the author as quickly as it did to me which was the first time I thought about it. As a practical matter, once you servo out the DC offset error you create a response no longer flat to DC and it becomes a high pass filter simulating a "big" Capacitor using a little one.

A second issue with a fully DC-coupled design is the second stage common mode rejector. The author writes:


The changes to the input stage unfortunately only move the common-mode rejection problem one stage back...
In it's classic form, this circuits common-mode range is insufficient for our needs.

He then goes on to describe the evolution of the topology used to attenuate the up to 48V common mode potential down to a manageable value and acknowledges the 14 dB increase in noise gain from having to do that. (The added 3K3 resistors are used to divide Vcm to safe levels.)

One additional thing that limits the performance of a DC-coupled second stage - in addition to the aforementioned noise gain - that the author does not mention is the amount of power burnt off in the second stage's resistors. A quick back-of-the-napkin calculation shows about 150 mW/leg in the 10K input resistors alone. At 10K this is manageable but at lower values, to improve noise performance, a lot of DC drive is required from the LT1028 outputs. He does point out that for the 40 dB gain of the first stage that the voltage noise of it dominates but at lower gains I suspect there is a noise penalty.

I thought you guys would like to see this because after having searched for it (or something else like it) Google never returned this hit.

A "use no capacitors at all" approach was published in 1989.
It provides some good validation...
https://ka-electronics.com

It is hard to assign too much weight to that priority since AFAIK it did not result in a single commercial design. Just an app engineer's wet dream. However it could hurt your patent chances.

The hard part about this approach is not the concept but the execution. You have done far more leg work to work out important details (like testing with problematic mics) than anyone I know of. I have had an interest in this for decades and did my share of late night beer soaked scribbles. After I left Peavey I even bought some high voltage caps needed for the flying PS so I could melt some solder, but I never did. Since then I found Wayne's work and have been able to scratch my itch vicariously watching Wayne pursue this.

I still expect there could be a niche market for this. I'd love to see Wayne get some recognition and reward for this. I had been scared off pursuing this in a commercial design because of the inevitable finger pointing exercise should it not work with some oddball phantom powered source.

PS: My old thinking was just to fly a discrete front end up to phantom voltage, so not like Wayne's work, more like the Cohen topology (I hate calling it that) with opamps sitting fixed at conventional supply voltages, and input devices flying up wherever.
Don't only half-ass tune your drums. Visit https://circularscience.com to hear what properly "cleared" drums sound like.
Top
Post Reply
123 posts