Working harder than ever to lower our Google search rank.

Nice find. It did seem like someone must have worked on this earlier.
Best,

Thanks JR and Doug.
I'm indebted to Dimitri Danyuk for pointing it out to me and for Rudolf Chalupa for the 1989 work.
I remember Gus saying he had seen something like it before using flying rails back in '07.

Dimitri has published several articles himself that I've linked to in the past.
search.php?keywords=Dimitri+Danyuk
https://ka-electronics.com

There's actually a "high end" preamp that's been on the market for about 4-5 years called Sonic Lens from UpState Audio. It has a DC coupled input design that can be used with phantom powered condenser mics. It uses a DC level shifting circuit with no capacitors or transformer to block the bias. Not sure if its similar to your design. They have a patent on the concept, you can check it out online #6577187.

I don't think I have dates on any of my old notebook scribbling... Wayne what is your earliest dated post or work?

I recall stuff by you from before you started this forum.

Thanks Dave and JR.

I haven't put my lawyer hat on today to read the claims in detail but it's very similar to the work of Chalupa in the 1980s.
I have a letter of the schematic in a sealed envelope I mailed to myself postmarking the date of my gizmo around 2007.
It appears to require a HV front end with the later stages used to either burn-off or level-shift.
(He shows several methods in addition to the one below.)
Based on what I've done I don't see any conflicts with the patent. 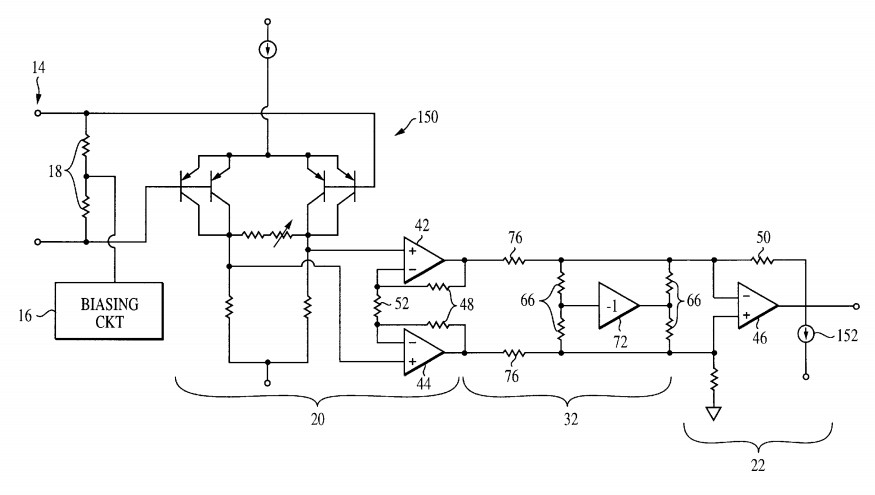 The website does not have any actual product photos so I'm not sure the Sonic Lens is actually in production.
The published specs show a frequency response to 0.3Hz, not DC.
Though it may be fully DC-coupled in the patent I suspect that there's a servo in there to deal with the mic and preamp DC imbalances.
So it's not exactly fully DC-coupled end-to-end since the servo forms a HP filter.
https://ka-electronics.com

That drawing even if only thematic of the actual circuit does not look correct. The gain resistor needs to be between the emitters for good operation.

My early scratching was similarly flying a single pair of 2sb737s PNPs up at voltage as required by the phantom, and the collectors would deliver the current down at lower voltage.

Something also looks wrong around 66 and 72.
In one drawing level-shifting is shown by Zeners.

What could go wrong with zeners in the audio path.

I hope I found the latest incarnation of this thread and I'm not posting in some super ancient place...

Recently I dedicated some brain processing power to the topic of interaction between DC servos and caps. Usually these are the phantom blocking caps. I thought about switching them out of the way when phantom is off (as suggested by JR and others) but then thought... wait a minute, what's inside the mic? And then I thought the same should apply to Wayne's Direct-Coupled Input-Capacitorless Active Mic Preamp as well:

In a preamp with phantom blocking caps and a DC servo that "some way or another" modifies the DC seen by the input transistor's bases there can be interaction between the caps and the servo. If the corner frequencies formed by the caps and the bias resistors (or whatever forms the high-pass filter) and that of the DC servo are too close to each other it leads to low-frequency oscillations of the servo output voltage (and thus fluctuating DC offset). So usually the frequency set by the phantom blocking caps is chosen to be roughly 10x higher than that of the servo. At least that's what I've found to work reliably.

Now consider Wayne's preamp without the caps but a servo injecting into the bases. There can be no interaction because there are no caps. But there might be caps inside the microphone. Mics using the Schoeps circuit don't have them, but others do. I recently came across the circuit of a Gefell MT 71 S which has 47uf caps followed by roughly 47 Ohms build-out resistance in it's output (and then two 5k6 resistors to extract the phantom power). Probably many other transformerless microphones have a similar output structure. Wouldn't we run the risk of getting interactions with the caps inside the microphone? Wayne, did you test your preamp with mics with such a type of circuit?

Thanks olafmatt for thinking about this project.

I anticipated output coupling caps internal to the microphone, but I couldn't find an example of that topology in a real microphone that I had available to test.
I had to test for that possibility using a capacitor-coupled generator.

With capacitors coupling the input, the topology is very similar to a conventional input with a differential servo.
There are some scaling differences in the value of the injection resistors: 100K vs 1M2 (typically).
It appears to me that the Thevenin equivalent of the injection resistor in parallel with the bias resistor along with the "input" capacitor sets the time constant of the input RC network.
Comparing a conventional AC-coupled reference design with (1M2||2K) to the DC-coupled input with (100K||5K) with added input caps and they are close.

The relationship of the servo's response to the input RC versus gain is what could be different.
Its been awhile since I looked at this but as I recall I didn't see any adverse effects with input caps in place and saw no need to re-tune the servo.
The damping seemed correct at all gains both with and without caps.

If there were a problem I should have seen it here: viewtopic.php?f=6&t=14&start=201
I was switching gain that day (and a lot of others) like a maniac.

So to answer your question I did test it and didn't see servo instability but it's been a very long time since I did.
If there were ultimately a need to have the servo "switch gears" with gain to maintain stability it's very easy to do with the Differential Deboo by switching a single capacitor.

When I get a chance I will check for this: The worst combination would be at high gain with input coupling caps.
But I should have seen it by now.
https://ka-electronics.com