A peak responding current shunt monitor using a TL431 as a comparator to indicate driver overload.

An update on the circuit JR has previously poo-pooed.

My reverb experiments have shown me that a zero ohm output with equalized drive to simulate constant current is the way to go.
It just sounds better. viewtopic.php?f=6&t=213&start=50#p12059

Constant current drive, or an approximation of it, is necessary with highly inductive drive transducers.
Current, not voltage, does the work.

The reverb is using two Type 9 drivers in parallel to maximize electrical damping.
The transducers represent a 5Ω load at 1 kHz.

At high frequencies, where the impedance of the driver transducer is much higher, a correspondingly larger peak voltage is required to maintain the same level of current.
At the recommended nominal drive of 56 mA RMS (two transducers) only 280 mV drive is required at 1 kHz.
With 30V supplies the amount of voltage available, versus the amount of voltage needed, is quite large.
While there is plenty of voltage and current headroom in the driver, current headroom in the transducer is limited by distortion and burn-out.

If we assume that 10 dB overdrive is a satisfactory headroom margin for a reverb, then the peak current works out to be just under 250 mA.
The approximate measured drive voltages at 250 mA peak current are:

Voltage across the transducer is obviously not a good way to measure transducer current or overload.

At DC the transducer resistance is below an Ohm - wiring resistance and the output impedance of the driver have an effect on LF response.
A simple form of current limiting is needed without introducing any DC resistance in the output.

Taking feedback from the load side of a output build-out resistor could keep the output impedance low but, with an inductive transducer, stability would be a problem.
Some other form of simple passive current limiting would be better.

At what current do the Type 9 transducers burn out?
I don't know and don't want to find out. (I've driven them up to +20 dB over for a short time and they complained loudly.)
At some point however a dash-board light needs to light up and signal "Stop this."

Enter the TL431 peak flasher ":winky:" that JR hates about as much as squirrels in his yard. 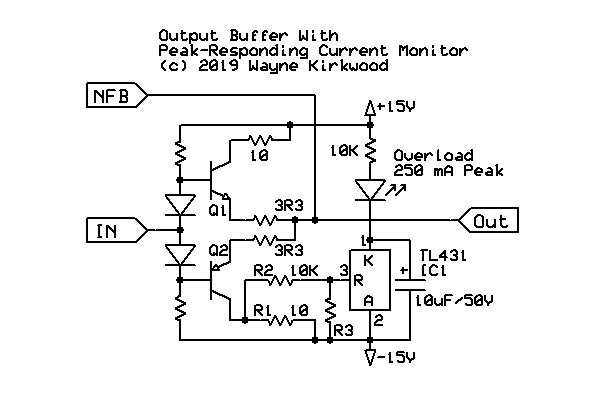 The driver op amp is not shown...
To limit available current to values that are hopefully "safe" under extreme overload conditions, the old trick often used in headphone amplifiers of adding collector resistance is used here.
Resistors at the collectors of the output transistors collapse the supplies under extreme current overload.

Because the collector resistors are inside the feedback loop they don't raise output impedance until they begin to collapse.
Its crude over-current protection.
For this application a value of 10-20Ω seems about right.

Having a resistor in the collector provides the opportunity for output current to be measured indirectly.
Reading the peak voltage across R1 provides a measure of load current.
250 mA conveniently develops 2.5V peak across R1.

The TL431, operating as a comparator, begins to draw current through its cathode connection when the voltage between the reference pin and anode exceeds 2.5V.
At 250 mA peak the dash board warning light (the LED winky) lights up.
The 10µF/50V cap stretches the peak providing a bright, crisp LED turn-on with a clearly-defined threshold voltage and peak hold capability.
It will flash on a single-cycle burst. (Not a requirement but a bonus.)
Unlike the original post, the LED current, just under 3 mA, flows from the positive to negative supply.

R1 develops a current sample voltage as well as limits negative drive current.
R2 is a necessary series resistor to limit input current to the TL431.
R2 is required even if R3 is not used.
R3 provides voltage division to provide trip voltages greater than 2.5V if needed. The 1.25V version of the TL431 can also be used.

The TL431 peak-responding current shunt monitor, costs only pennies and works much better than a transistor in this application.

Its early and I'm going to feed my squirrels. They look forward to their Graham Crackers...
https://ka-electronics.com

That would be pooh poohed....

That would be pooh poohed....

BTW the output lead never leaves the box so it would be hard for the end-user to short it.
Otherwise I would have used active current-limiting.
https://ka-electronics.com

You could always use it as an audio amplifier... 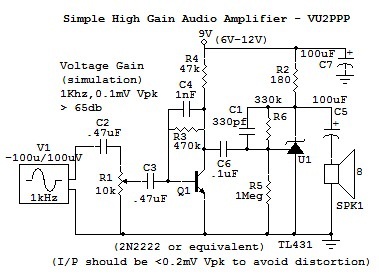 You could always use it as an audio amplifier...

Then you'll love this: http://www.klausmobile.narod.ru/appnotes/an_13_tl_e.htm

It really does make a nice, precise turn-on voltage, "transistor" or level-shifter.
The link above shows several examples one of which is a turn-on sequencer.

yes I have google too...

For DIY do what floats your boat, in large scale production I have seen small specialty circuits come and go... hopefully its primary function (shunt regulator?) will keep it in active production for a while.

I am worried that even serious analog products like THAT VCAs will go away eventually...

How long before we have to buy them from Uli's fab in China?

I have seen small specialty circuits come and go... hopefully its primary function (shunt regulator?) will keep it in active production for a while.

The TL431 and a companion optocoupler are used in virtually every switching power supply ever made and is multi-sourced.
Meanwell, Astec, Antec and everyone else may just have it wrong about the TL431.
There are probably 2 or 3 within 20 feet of you if not more.
Its as common, if not more so, than a 2N3904.

Mouser has 14 pages of TL431 inventory. I added the quantity on-hand at Mouser that I found on the first page.
The total was 1.42 million units available just on the first page.
I have to go to page 10 of the listing before I start finding the ones that are on order.
There could easily be 2-3 million units sitting in Mansfield at Mouser HQ.
I have to wonder if Mouser has that many of a single part number in any other semiconductor or any other part for that matter.

Maybe you should figure out how to make a landscape lighting controller with one...
https://ka-electronics.com

either my browser or the forum software timed out and ate my long answer, so you win, never mind...


For DIY do what floats your boat, in large scale production I have seen small specialty circuits come and go...

Which is kinda why I didn't use an LM675 as the power driver and opted for an op amp and a couple of transistors.
https://ka-electronics.com

Looks like TI introduced an improved TL431"I" as recently as November 2018.
https://ka-electronics.com

CDC: "For 6% of the deaths, COVID-19 was the only cause mentioned. For deaths with conditions or causes in addition to COVID-19, on average, there were 2.6 additional conditions or causes per death." https://www.cdc.gov/nchs/nvss/vsrr/covi ... /index.htm
Top
Post Reply
49 posts