Where we discuss new analog design ideas for Pro Audio and modern spins on vintage ones.
Post Reply
41 posts


I think the maths for RMS detection relies on a linear integrating capacitance?

Yes RMS math is SQRT of integral of x^2... I have made multiple RMS circuits using transistor Vbe junctions to form the ^2 and ^0.5 math with a simple inverting op amp and feedback cap to compute the integral (plenty of examples in old Analog Semi handbooks).

I even coded up RMS for a microprocessor based meter I did for a friend's console company several years ago but i could not see a difference with complex music, so removed it to keep it simple. I had to roll my own square root function (not standard in RISC processor) that took 1+ clock tics per bit of sqrt product resolution. The processor could easily handle it, but I didn't see any difference or value in the visual meter display vs. using simple average****. Note this comparison was made with very precise matched attack and release time constants for both (which dominated the visuals IMO). Many swear about audible benefits from RMS detection, and dbx pimped their tape NR systems for decades claiming more accuracy dealing with less than perfect tape transfer functions because of the RMS. It's a bit late to re-litigate old marketing arguments, and I try to never argue with people about what "they" hear.

I wouldn't expect RMS to offer much benefit for a static sine wave control loop.

*** In hindsight I didn't have to perform the SQRT calculation in real time for a LED RMS meter displaying discrete ranges. I could just map the integral of x^2 to an output table that had the SQRT embedded in the table values. The X^2 is a one clock tic multiply function so no processing overhead penalty.
Don't only half-ass tune your drums. Visit https://circularscience.com to hear what properly "cleared" drums sound like.
Top

I wouldn't expect RMS to offer much benefit for a static sine wave control loop.

I don't think it does either.

However, if you're going to use a THAT4301 to make an SV oscillator that's the detector you have on-chip.
Since it takes two 4301 VCA sections to make a tuneable SV oscillator you also have two "RMS" detectors for the SV 0°and 90° signals.
Without a timing capacitor the raw detector outputs would give you log|sin²| and log|cos²|.

The non-linear C however might benefit ripple reduction in an averaging topology for the oscillator's AGC loop.
A windowed track and hold also might be useful.
Aphex called theirs a "sticky leveler."

From an EMC point of view (radiated and through common power supply impedence) an RMS detector and a variable gain cell is a whole lot quieter than grabbing the peak of the cosine at the zero crossing of the sine, which is in the case of the HP8903 is 5 comparators, some logic and a monostable.

I think the main form of distortion from RMS based AGC is a low frequency amplitude modulation (over several cycles), as the compressive action tends to overcompensate, and the level detection takes several cycles to get a reading.
Top

I now have an AGC loop that I'm happy with based on an adaption of Vicktors Mickevics' design.

The updated Wien bridge portion of the oscillator has an added link to disconnect the VCA output for test.
I'm also using a different VCA Ec pin than before and increased the input resistor to 47KΩ. 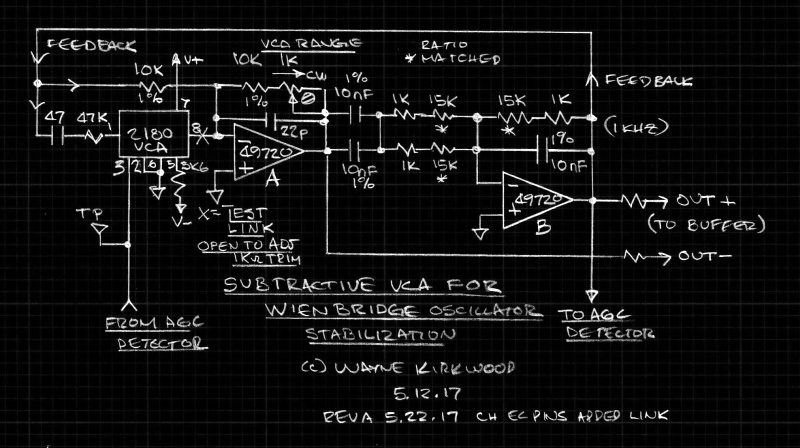 A link was added at the output of the VCA to allow the 1KΩ trim pot to be preset.
With the link open the pot is trimmed so the oscillator has enough gain to start.
(The 1K can be made much smaller in value maybe about 200Ω.)
With the link closed the final trim adjustment can be made by setting Ec- to +380 mV.
This sets the VCA Q-point to about -63dB attenuation.

The AGC is a modified version of Vicktors Mickevics' half-wave design.

I found that the heavy filtering of Vicktors' half-wave design had just as low a distortion as a full-wave rectifier.
Due to the way the VCA works the "kick-start" power-up circuit in his FET-based design is not needed.
The whole oscillator - excluding output buffers - is just two LME49720 and a THAT2180 VCA.

The AGC loop servo point is the inverting input of op amp B.
Current is pulled out of the summing node by the output level adjustment.
The oscillator output level is controlled by the servo action of op amp B and the VCA so that average current sourced from the rectifier vs. the reference current hold the two currents in equilibrium.

With the values shown, the oscillator output peak-to-peak level is approximately equal to the reference voltage at the wiper of the output level pot.

At this point I'm measuring converter distortion.
I need to build the notch filter. 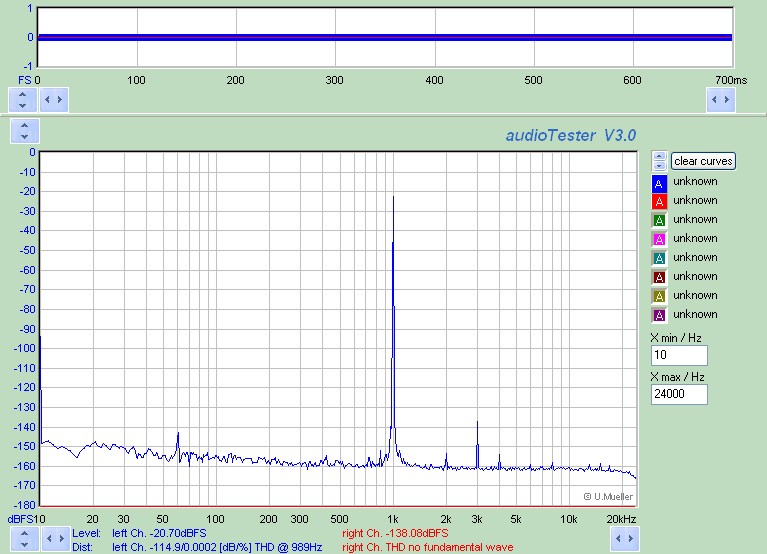 I had a chance to build a 1 kHz passive notch filter to check the oscillator purity. 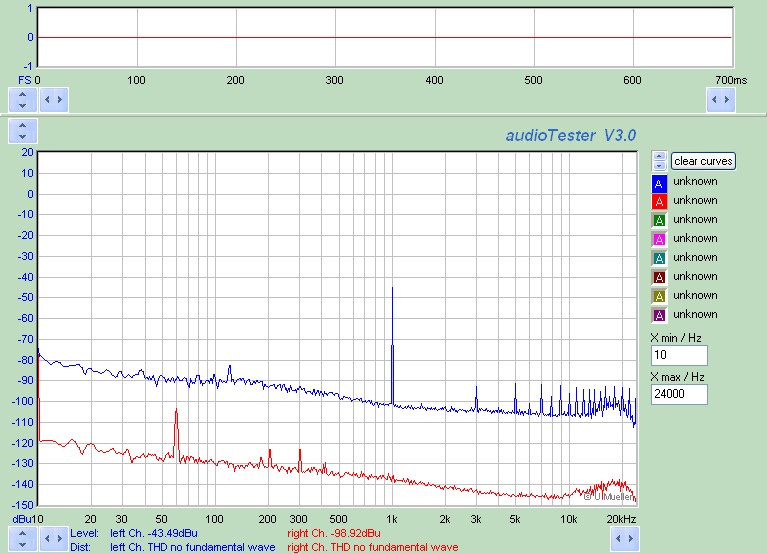 Oscillator output distortion at +10 dBu with a notch filter at 1 kHz and 40 dB post-filter gain.

The oscillator is currently on a Protoboard and I do see some HF rectifier transients in the nulled output.
On a PCB board I'm confident the higher-order harmonics can be lowered.

The amount of VCA attenuation does not have an effect on third when its contribution is varied from around -40 to -65 dB so it does not appear to be a significant contributor to distortion.
I think I'm seeing op amps, film caps and strays.
Its so much better than the converter I'm using for measurements so its THD is low enough.
https://ka-electronics.com

Now clean up that mains hum...

I haven't visited this thread in awhile and wanted to provide an updated schematic of my VCA-based variation of Vicktor's oscillator. 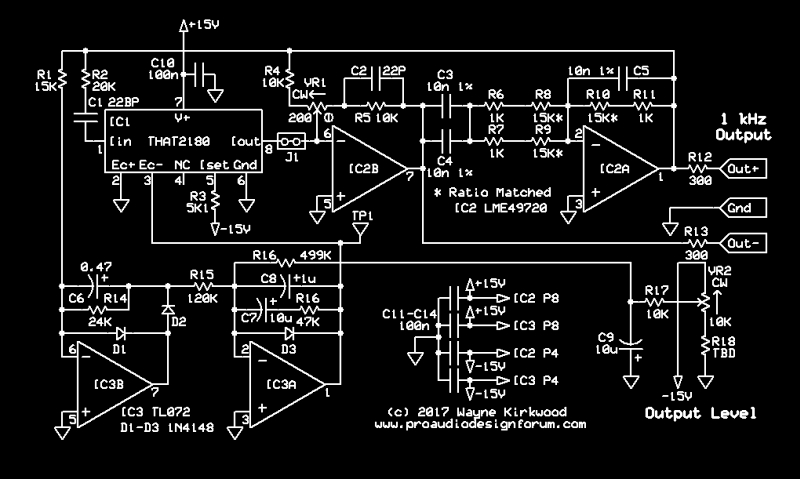 The only change from the previous version was to move VR1 to provide additional adjustment range to compensate for R4/R5 tolerance.

Using a notch filter I'm able to determine that the distortion is below -140 dBc.

I can only obtain that performance using the LME49720. No other dual op amp I've tried can come close. The op amps are clearly the most significant distortion contributor.

The subtractive VCA's highly non-linear control response is advantageous to stabilization and permits the "kick start" circuit in Vicktor's original, required for a FET, to be eliminated.

I haven't yet drawn Vicktor's floating TL431 shunt supply which I intend to use.

The adjustment procedure is to set VR2 to midpoint.
Open J1 and adjust VR1 until oscillation is sustained.
Crank the mult-turn trim about a half turn until the oscillator output is mildly clipped.
Install J1. After the loop stabilizes adjust VR1 for +360 mV at TP1.
This adjusts the gain of the feedback loop so that the VCA is in 60 dB attenuation.
Wait a few minutes and then trim VR1 again to 360 mV at TP1.
Power-cycle the oscillator and check for startup.

When the unit is powered up cold, you will initially see TP1 around +400mV.
If startup is uncertain adjust VR1 for slightly more gain.
TP1 should remain at about +360 mV as VR2, the output level, is varied.
https://ka-electronics.com

The old catch 22 measuring the distortion of your test equipment.....

Decades ago when I rigged the the product output of my (heathkit) distortion analyzer into my (Singer) spectrum analyzer to extend the measurement floor, I had to drop the nominal 0dB operating level of the Heathkit to stop seeing it's own distortion.

Does anyone know if you can buy such a low noise generator somewhere?
Top

Thanks for joining us Alejandro!

Victor Mickevics aka "vicnic" at DIYAudio is selling his sub-ppm oscillator. Victor was originally selling it on ebay but now is asking that you PM him at DIYAudio.
https://ka-electronics.com