Well handy to know that there is a very good reason most MCs are loaded between 100R and 1k even if people thought it was due to some flooby parameter they read about in a magazine. As it's only really there to damp the resonance I do wonder the angst some go through chosing a value and then a resistor type. Vishay bulk foils are popular in this position, I kid you not!

I might be being friday night dense, but won't a balanced cable from TT to preamp provide at least the 4.7nF differential C required for stability?
Top

billshurv wrote: ↑
Fri May 18, 2018 5:01 pm
Well handy to know that there is a very good reason most MCs are loaded between 100R and 1k even if people thought it was due to some flooby parameter they read about in a magazine. As it's only really there to damp the resonance I do wonder the angst some go through chosing a value and then a resistor type. Vishay bulk foils are popular in this position, I kid you not!

I might be being friday night dense, but won't a balanced cable from TT to preamp provide at least the 4.7nF differential C required for stability? 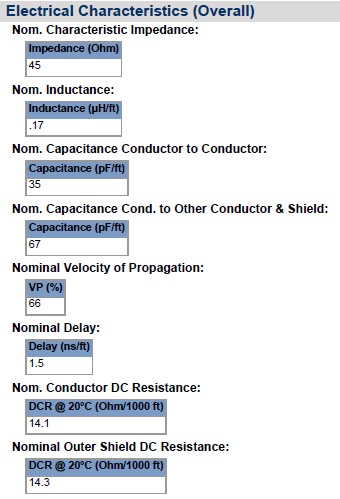 People probably wouldn't use Belden 9451 (shown above) but its an OK point of reference.

Mouser have the Vishay in stock now in the values I'm using. (At around $25 US each.)

I found that when I lowered the input inductance to 10 µH it really needed both a termination R and C of 300Ω||4.7nF to be stable with both balanced and unbalanced terminations.
That was with the only the inductor's 0.5Ω and no equivalent cart RDC in series.

I've seen loading values on preamps without input series resistors up to 10 nF.
I'll leave a spot so it can be populated with up to a 10 nF poly film.

Was also looking at Vogel and the measured 4.9 pA√Hz current noise is right in the ballpark.
https://ka-electronics.com

Argh factor of 1000 out, I knew I shouldn't have posted on Friday night

I saw nF and read pF. Belt and braces is always good btw esp as this should be in use for quite a while in my system. I wouldn't say 'last MC stage' but penultimate for a while.

(OT the ultimate for the time being is just a bit of fun when I mentioned I was planning to get a focusrite Scarlett 2i2 for ripping vinyl and general measurement work. It was pointed out that the mic inputs on that are not too shabby and you could pop a phantom powered 20dB head amp on for MC duties. Given the number of audiophiles this would offend would be churlish not to built that up for experimentation).
Top

A few things do not seem to match quite well between your Measurements against a full Simulation.

1) With 2 Ohm between both emitters, 316 Ohm feedback resistors and the two That1240 circuits, theoretical gain should be 56 dB. However your measurement shows 54 dB, 2 dB less of which 0,65 dB (Rin=1k3 ?) can be accounted for the input resistance of your measuring equipment.
That leaves 17% (1,35dB) of the expected output still to be unexplained?

I'm pretty sure the calculated and actual gain differences are due to internal contact resistance on the Protoboard.* With Rg as low as it is (was) a small parasitic amount becomes significant. (Also applies to Rsource.)

I also discovered in my later measurements a lot of magnetically-induced hum from a different analog bench power supply. I have to physically null the hum field to get any meaningful measurement. It's a big 60W linear with a huge transformer. At the moment it powers the A/D used to test it so I can't just turn it off and use another supply until I rewire.

I'm not feeling a lot of love for DIY right now so it may be awhile before I lay this board out (if ever) and get it in a form where it can be shielded and properly-measured.

*(Complain about Protoboards all you want but they can at least tell you if something works or not. I've had a lot of things that didn't work and none of them were the Protoboard's fault.

Modern Protoboards, which do not have a grounded or shielded metal base plate, are almost worthless and deserve the term "slabs of pain." Older ones usually measure about 1-2 pF between adjacent terminals or a terminal and ground and the ground post is actually bonded to the metal.)
https://ka-electronics.com

(assuming you have no issues with me trying to build it).
Top

I think we need to tidy up a few things before you do that.

If I could get a few commitments for boards, when the time comes, I'll do a layout. (Maybe 3-4 boards).
https://ka-electronics.com 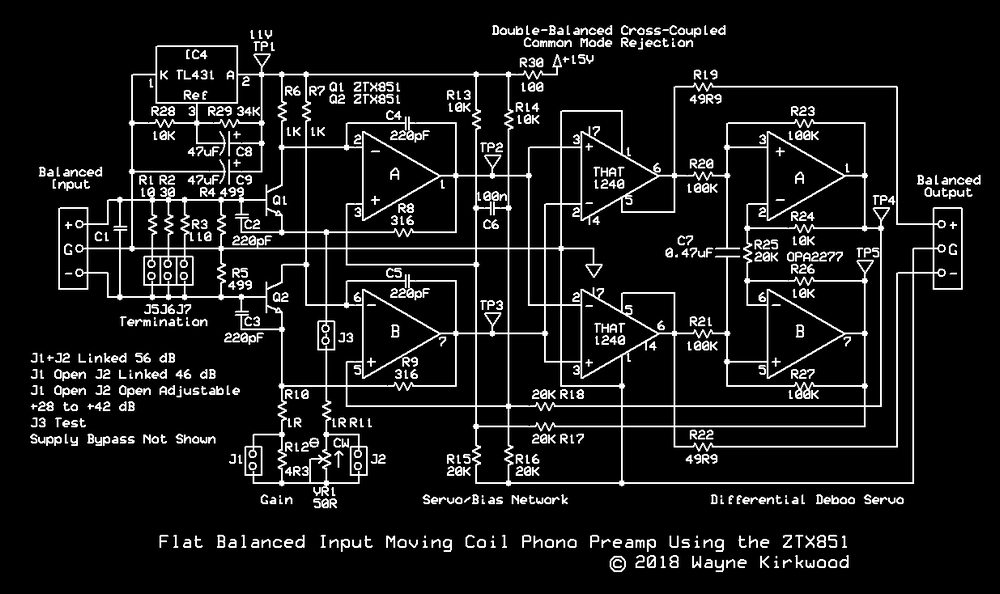 It had occurred to me some time ago, and I just remembered, (thank you Hans) that R13-R18 contribute additional differential mode noise not present in either the original prototype or sim.

Without first dealing with measurement hum I couldn't really look at it.

In the original circuit, a single voltage divider is used to set Ic for both halves.
The noise of the divider network is presented in common mode and rejected.

The circuit with the updated servo uses two dividers in a bridge configuration.
R17 and R18 inject servo correction to the bridge.
A differential noise voltage appears across C6 and the non-inverting inputs of op amps A and B of the first stage.
The Thevenin equivalent of the bridge is 5KΩ per leg.
Those resistors are not modeled (I think) or are in first set of measurements.

My gut tells me the servo op amp noise, in comparison to the aforementioned resistors, is de minimus.

The solution (I suppose) is to make C6 the dominate servo pole and C7 one much higher in frequency.
C7 still provides a passive input pole to relax AC requirements of the servo amp.
C6, if made significantly larger than 100nF, then serves double-duty to filter differential noise and provide integration.
(Since servos produce a derived, subtracted, HP response we don't want to get cute and introduce a second-order response that would peak.)

The second thing I'd do is insert two low-value (47-100Ω?) resistors in series between Q1's collector and op amp A's inverting input. (And a second between Q2 op amp B.)
The purpose of that, I believe, will allow a reduction in the value of C4 and C5.
My unscientific guess is that this will better-isolate Q1 and Q2's output capacitance from op amps A and B inverting node.

When I'm curious enough to fire up the Protoboard again I'll report back.
https://ka-electronics.com

In my Sim I used a noise free voltage reference for amps A and B. And also no servo was included.
I will complete my model to be exactly what you have proposed, the outcome possibly giving you some extra support.

To simplify your model you could eliminate the servo op amp and R17/R18.
Make R15 and R16 10KΩ.
That puts the bridge in its quiescent DC condition but should model the same for noise.

The noise of the servo op amp outputs are attenuated by 12 dB so I don't think its a big contributor.

If the sim and the measured are closer, but still significantly off, I'm placing my bets on hum.
https://ka-electronics.com