Relax in southern comfort on the east bank of the Mississippi. You're just around the corner from Beale Street and Sun Records. Watch the ducks, throw back a few and tell us what's on your mind.
Post Reply
418 posts

SHOCK REPORT: There Were More COVID-19 Vaccine Deaths Last Week in US than COVID-19 Deaths

There are now 9,125 reported deaths from the COVID-19 vaccinations across the United States this year.

The number of deaths linked to vaccines this year has absolutely skyrocketed. According to the CDC’s own data, in 2021 n the first 3 months, the VAERS website recorded over 1,750 deaths due to vaccines in the US.

“The Vaccine Adverse Event Reporting System (VAERS) database contains information on unverified reports of adverse events (illnesses, health problems and/or symptoms) following immunization with US-licensed vaccines. Reports are accepted from anyone and can be submitted electronically at www.vaers.hhs.gov.”

There have been 411,931 adverse reactions reported to the vaccine.

Also, last week there were 1,505 COVID-19 deaths in the United States.

Study On Electromagnetism Of Vaccinated Persons In Luxembourg

Study On Electromagnetism Of Vaccinated Persons In Luxembourg


For the past few months, hundreds of amateur videos have been popping up all over social media featuring people who have visibly become electromagnetic following vaccination. After many questions were raised by a number of our members about this "supposed" electromagnetic effect in vaccinated subjects, our association decided to take a concrete interest in this intriguing subject.

This survey, of a purely statistical and sociological nature, on this supposed electromagnetic effect, which is the subject of this report, raises at least three important questions:

1. Is it true that people show an electromagnetic effect after vaccination?
2. If so, is it true that only vaccinated individuals show this effect?
3. What is actually injected into individuals under the qualification of vaccine that causes this
effect?

To try to answer these questions, the survey was entrusted to Mr. Amar GOUDJIL, treasurer of the association and member in charge of demographic and sociological issues.

 It was found that vaccinated individuals do give off an electromagnetic field and that the earlier the individuals were vaccinated, the stronger the field they gave off. This sensation and appraisal, which is purely a tactile experience when the shoulder magnet is applied and removed, should be verified much more accurately with much more precise equipment.

 It was extremely difficult to find individuals willing to play along with this extremely disorienting experiment.

 Individuals are interested in the experiment out of curiosity and then when they see that the magnet clings onto their skin, they become dubious at first, then they suddenly become cold. Some of them even become extremely nervous, even completely shocked.

 People sincerely wonder how a magnet can stick to their skin as easily as it sticks to a metal pole.

 They ask for an explanation and the investigator reassures them that there must be an explanation. They are referred back to the doctor who advised them to get an injection.

 One lady even cried and told me that she did not want to be vaccinated but was forced to because her employer said she had to because she works in contact with customers.

 In the conversations, it emerged that people do not even vaccinate for medical or health reasons, out of conviction or fear of the disease but often in the hope of returning to a normal life and being able to travel freely again.

 During the exchanges, people clearly express their dismay by saying afterwards that they are taken as hostages. Many acknowledge that this injection is non-consensual and that at no time were they given rational explanations, even if only from the point of view of the benefit risk balance. After reflection and discussion, they then describe this act as: "mistake, madness, loophole, solution, or even blackmail". These exact terms were used frequently.

Here again, a psychosocial investigation should be conducted into the real motivations that led the vaccinated individuals to agree to be injected. Ideally, all conversations with the vaccinated would be recorded and filmed for further analysis.

 The survey is stopped for reasons of conscience and morals because the investigator is no longer able to cope with the helplessness of people whose faces become petrified when they realise that they have been injected with a substance of which they know nothing.

The investigator, who has studied management techniques and psychosociology in the past, is very uncomfortable with these people who are wondering what is happening to them. People become pale, white, nervous, put a hand to their forehead or cross their arms and pinch their bottom lip. Some sweat from their hands as they are seen wiping them on their hips or thighs.

These effects and expressions usually occur in states of anxiety, extreme stress or really measurable tension.

For the respondents, these uncontrolled physical manifestations are indicative of a deep malaise when they realise afterwards that they may have done something irreparable.


(Natural News) Dr. Peter McCullough, one of the most highly cited physicians on the early treatment of the Wuhan coronavirus (Covid-19), has put out an explosive new video claiming that Wuhan Flu shots have already killed more than 50,000 Americans.

Calling the so-called “vaccine” a “bioweapon,” along with the Chinese Virus itself, Dr. McCullough alleges that the entire plandemic is a form of bioterrorism against the people, its purpose to cull and depopulate a great many of them.

“As this, in a sense, bioterrorism phase one was rolled out, it was really all about keeping the population in fear and in isolation and preparing them to accept the vaccine, which appears to be phase two of a bioterrorism operation,” McCullough stated during a recent webinar with German attorney Reiner Fuellmich and several other doctors.

“Both the respiratory virus and the vaccine delivered to the human body the spike protein, the gain of function target of this bioterrorism research.”

McCullough’s video is available for viewing at this link.

Hundreds of thousands of lives could have been saved with treatments for covid that were banned by the government
During the talk, McCullough made the bold claim that at least three whistleblowers, two of them from the U.S. Centers for Disease Control and Prevention (CDC), have confirmed that the true number of deaths caused by Fauci Flu shots is considerably higher than what the official numbers show.

Since VAERS (Vaccine Adverse Event Reporting System) only captures maybe one percent of all adverse events that actually occur, it is likely that the true count is orders of magnitude higher than what is being reported.

“Fifty-thousand deaths,” McCullough stated. “So, we actually have more deaths due to the vaccine per day than certainly the viral illness by far. It’s basically propagandized bioterrorism by injection.”

"This Is Worrying Me Quite A Bit": mRNA Vaccine Inventor Shares Viral Thread Showing COVID Surge In Most-Vaxxed Countries

"This is worrying me quite a bit," tweeted Malone, embedding the lengthy thread authored by Twitter user @holmenkollin (Corona Realism) via the 'thread reader' app.

New UK Study: People Who Have Been Vaccinated Make Up 47% of New COVID Cases


Data from a recently released study out of the UK, that uses data compiled from their Orwellian symptom-tracking app, shows vaccinated people account for almost half of the country’s new COVID cases.

The experimental jab has been getting worse results as time progresses. Just a few months ago, only 25% of people who had received the shot caught the wu-flu afterwards, and that number has now risen to 47% according to the study.

For Second Week in a Row: More COVID-19 Vaccination Deaths than COVID-19 Deaths in the US According to CDC and VAERS Websites


There are now 11,140 reported deaths from the COVID vaccine in the United States.

This is up from 9,125 reported deaths from the COVID-19 vaccinations total from last week. Two more Texas Democrats tested positive for the coronavirus Sunday, bringing the total number of cases among the nearly 60 lawmakers in Washington up to five.

State Rep. Trey Martinez Fischer of San Antonio said in a statement that he was one of the two members to test positive for the virus on Sunday, after testing negative on both Friday and Saturday.

The Texas House Democratic Caucus is not naming the individuals who have tested positive, but officials with the party said all of the lawmakers in Washington have been vaccinated, including those who are now infected.

Butt ugly "vaccine" shedders on a plane to DC. If they weren't so damn fat they would be at less risk for the 'rona.

So why take the damn shot if it's going to give you what you're being "vaccinated" for?

Karma is a bitch...
https://ka-electronics.com

In an Instagram post over the weekend, North Carolina real estate agent Dominique de Silva shared video of her experiencing dystonia, or involuntary muscle spasms, shortly after receiving a vaccine. 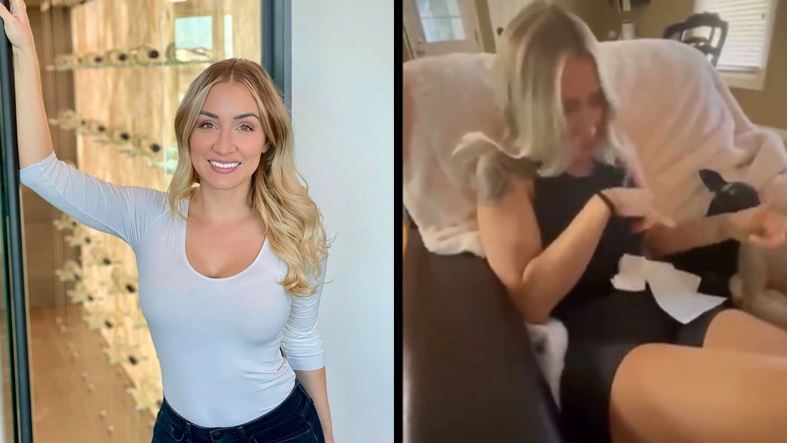 This is not a conspiracy theory.
This is reality.

If you claim this is invented "misinformation" you're brainwashed.

Motion For Preliminary Injunction Of Covid-19 Vaccine Emergency Use Authorization

For the non-brainwashed still dealing in facts and reality, America's Front Line Doctors' preliminary injunction is a must-read.
It outlines the whole Covid-19 fraud strategy and contains countless citations.

For those of you who remain brainwashed and believe the Covid/Fauci Flu/"Vaccine" bullshit good luck.
You're gonna need it.
https://ka-electronics.com


Music icon Eric Clapton has announced that he will not play any concert or venue where fans are required to be vaccinated to attend.
Clapton made headlines in May when he announced that he had a terrible reaction to the AstraZeneca Covid jab and blamed “propaganda” for overstating the safety of the experimental vaccine.