The medical industry has pivoted from helping humanity to exterminating it.

Relax in southern comfort on the east bank of the Mississippi. You're just around the corner from Beale Street and Sun Records. Watch the ducks, throw back a few and tell us what's on your mind.
Post Reply
1 post • Page 1 of 1

In 1985, while I was working for SSL, I had the chance to meet Bill Sebastian inventor of the "Outerspace Visual Communicator."


On the edge of the woods in Falmouth rests the decaying hulk of one man’s youthful ambition. It’s the bones and innards of an instrument that was designed to facilitate a pretty big notion: human contact with another dimension. The story behind its creation — and rebirth — involves the Vietnam War, New Kids on the Block, the early days of the Internet, and one MIT dropout’s lifelong determination.

The OVC (Outer Space Visual Communicator) was a giant machine, played with hands and feet, that allowed artists to create and finger-paint with light similar to how musicians create and explore sound with their instruments.The name of the instrument arose from Sebastian's collabortion with Sun Ra, the legendary jazz composer, in the 1970s and 1980s.

Bob Stewart, of Heavy Metal Magazine, described the OVC as 'Bill Sebastian's towering color organ.. Despite the technology involved the main factor here is personal expression. Sebastian's hands glide over four hundred touch sensitive buttons as he does his electronic finger-painting, concentrating on 'size, symmetry, sharpness, continuity, and other emotionally significant concepts" of the changing patterns seen on the eleven-by-ten foot display screen. He's not switching on a gadget. Sebastian really is an artist functioning in a manner similar to a musician and performing on an instrument of great range and flexibility.' (Bob Stewart, Heavy Metal Magazine).

John Bishop, of Video Magazine, added that 'the emotional energy of the visuals equals and at times surpasses that of the music. The images are not slaves to the sounds but function the way a dancer does; interpreting, harmonizing, and enlarging the space created by the music.' (John Bishop, Video Magazine) "Outerspace Visual Communicator" www.visualmusicsystems.com/OVC.htm

I visited Bill's workshop. While Bill was explaining the "OVC" to me he dubbed a demo he had on 3/4" U-matic videotape to VHS. A number of years ago I transferred that VHS to a DVD and now encoded it as an mp4.

At the end of the footage are some images of the OVC and Bill playing it. 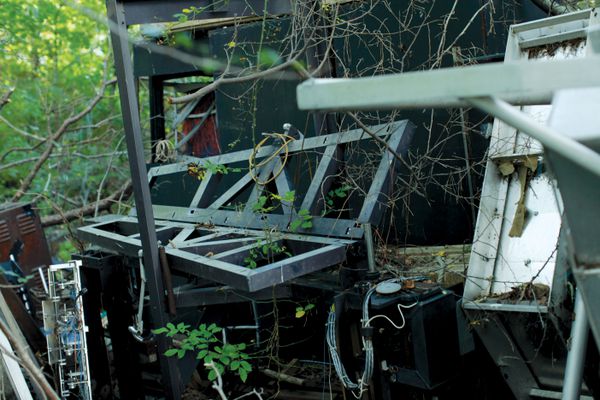 The OVC was a servo-controlled mirrored trough with a video camera at one end and a monitor at the other. The whole gizmo resembled a kaleidoscope. An array of incandescent PAR lamps, with a second camera aimed at the lamps provided input.

Directing Orson Welles: "What Is It That You Want?": https://waynekirkwood.com/content/Orson ... u_Want.mp3