Where we discuss new analog design ideas for Pro Audio and modern spins on vintage ones.
Post Reply
27 posts

In other words L+R for coherent signals results in a +3 dB increase instead of +6 dB.
This is done by phase shifting L and R so that they are 90° apart.
L+R then becomes decorrelated.


The 90° filter consists of two all-pass filter chains, producing a uniform 90° phase difference across the whole audio range. The left and the right stereo signals are each passed through one of these filters and added at the filter’s output. Doubling of equally-phased signal components as well as canceling of opposite-phased components is thus avoided.

Thanks for sending this to me some time ago Doug.
https://ka-electronics.com

I've always wondered if the Studer "90 degree filter" would be useful during tracking or mixdown to solve the problem of synths not properly folding down to mono.

This thread at Gearspace is one example "Mix Elements Half Disappear in Mono": https://gearspace.com/board/so-much-gea ... oting.html

Over at PRW "Improving Mono Fold Down": https://www.tapatalk.com/groups/proreco ... 09763.html

At GroupDIY I found sims: 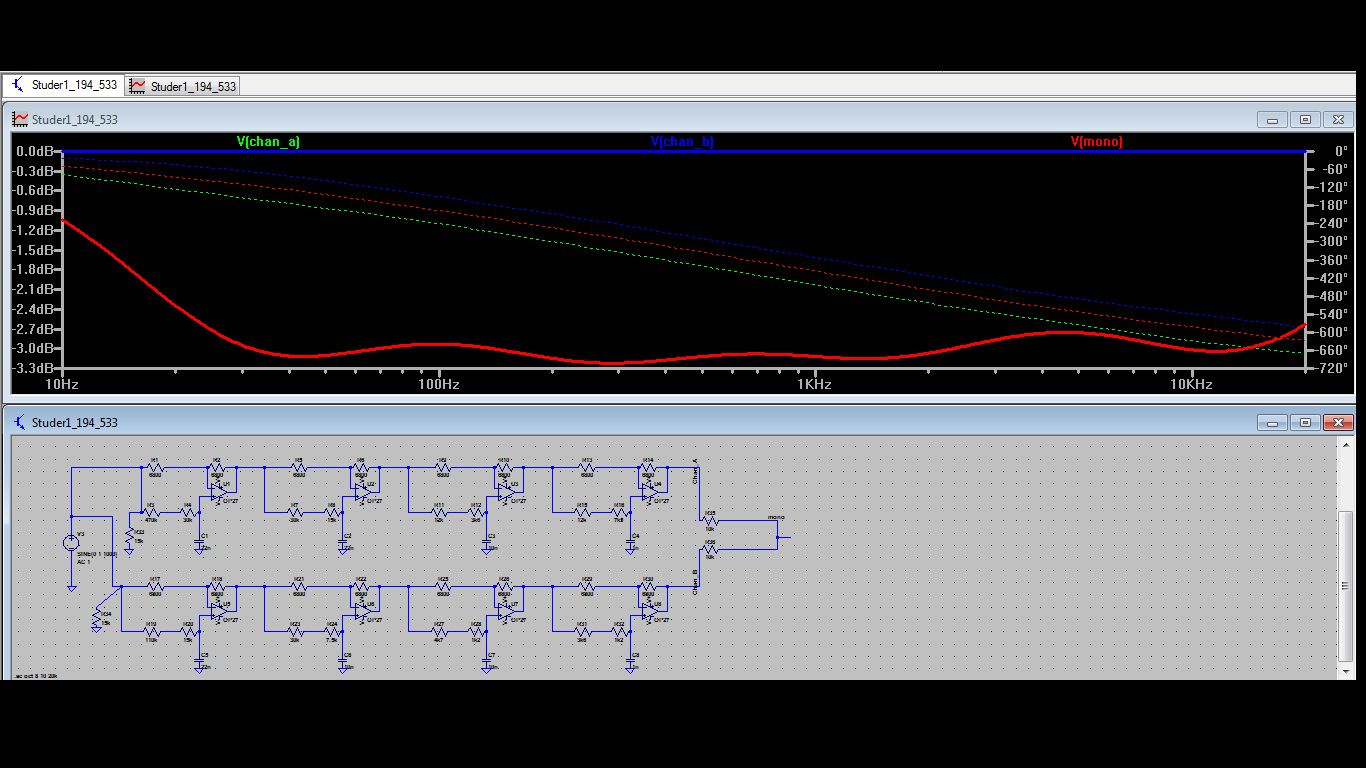 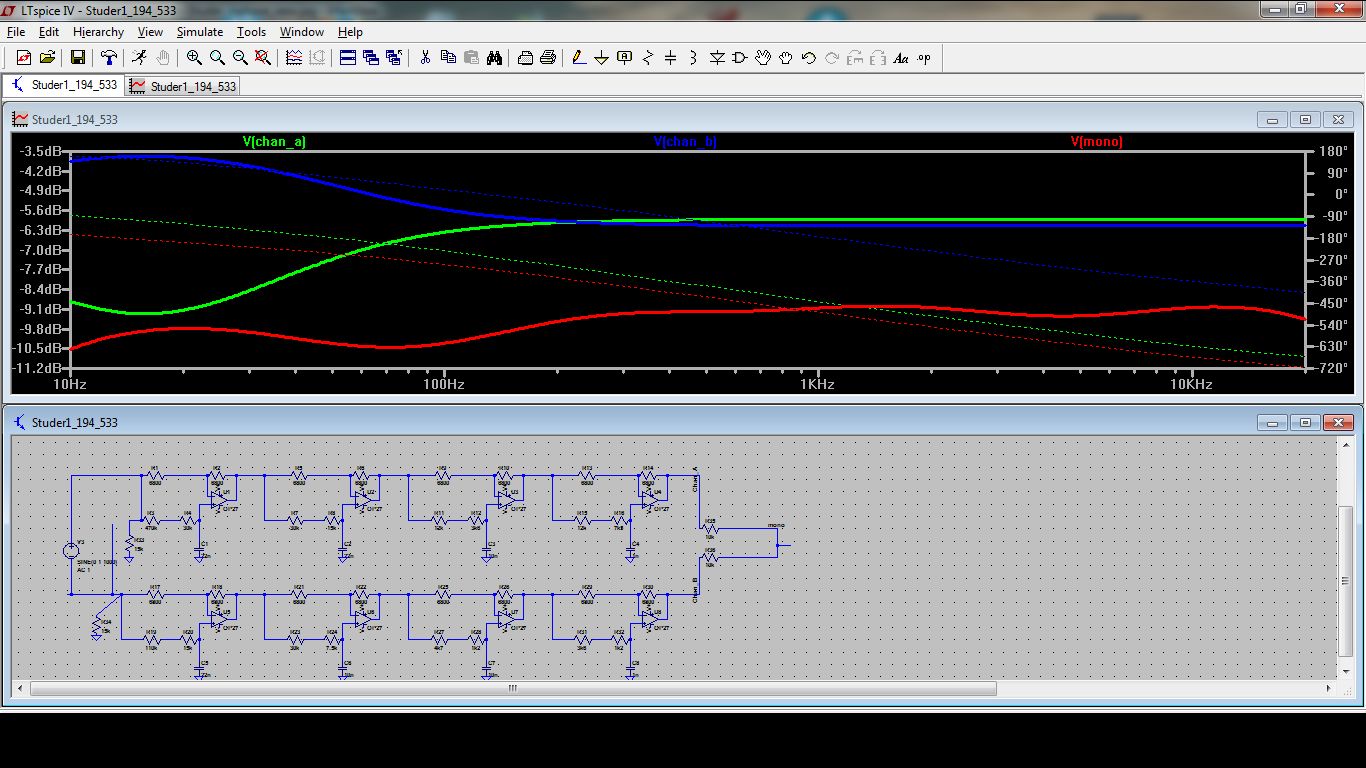 The question I had was "Would the Studer 90 degree filter solve the problem of synth's not properly folding down to mono?"

This has been on my "bucket list" so I built one and the answer appears to be a qualified "yes."

Though I wouldn't recommend it to correct a mix I did try it on the Stone's "Sympathy for the Devil" and it restored the piano during the intro which almost completely disappears in mono.

On a problematic synth sample posted at Gearspace it brought forward an upper string part and gave it a little more sheen.
In mono that part was more subdued and dark.

I need more samples and the time to critically listen to them.

One way to use the 90 degree filter would be to insert it between the keyboard and console during tracking.
The outputs could be left in stereo to improve downstream mono compatibility and left wide (wider) during tracking or folded down to mono in the filter, recorded in mono and then panned in the mix.

Another potential application, if you're into it, is mastering "elevator" background music.
Studer designed it for AM broadcasting.

With mono sine wave wave inputs an X-Y goniometer displays an almost perfect circle - mono music appears like a Brillo pad.
The 90 degree filter can also me used in reverse by making mono into "pseudo-stereo."

If the synth part is wide to begin with it will be, if recorded in stereo, even wider.
Folded down to mono the processed version has less tonal changes than the unprocessed version.

If there's interest, or when I get time, I'll record a couple of samples.

If this does prove to be a tool it will be one that might be used infrequently and only in very problematic situations.
https://ka-electronics.com

I decided to sweep the Studer 90 degree filter.

The sims I posted earlier are not correct. 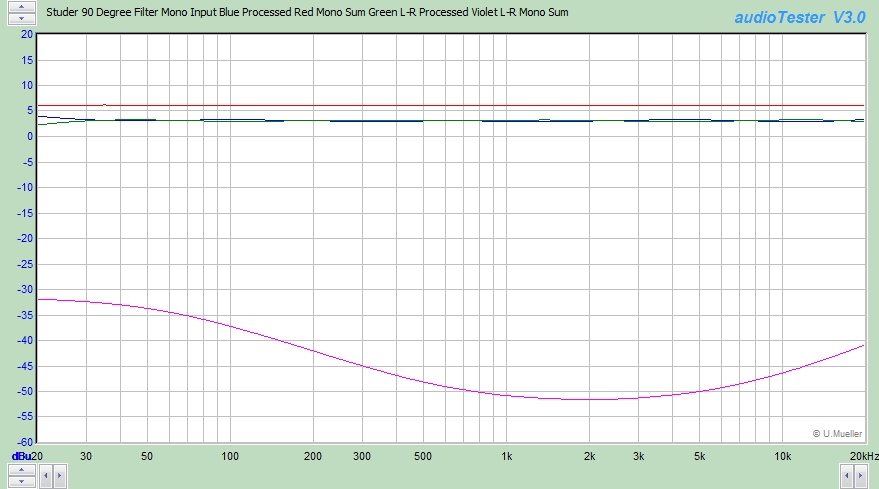 Here's an expanded view of the mono, and processed mono with in and out-of-polarity inputs. 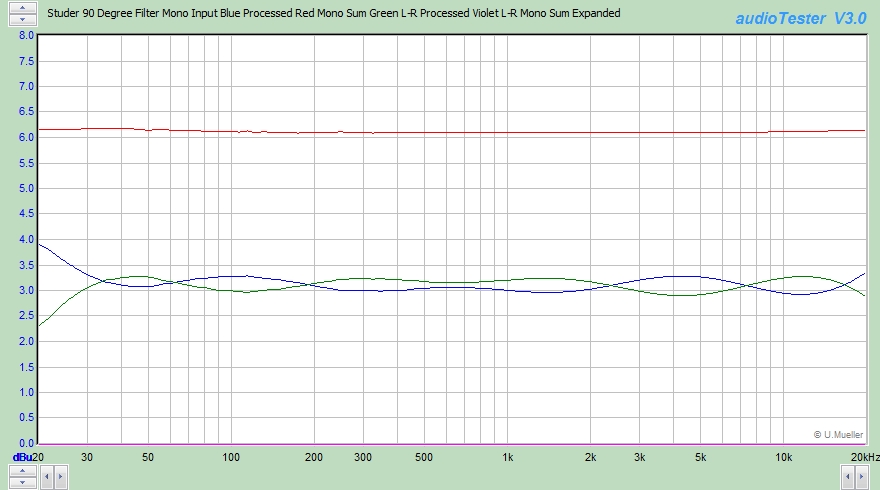 Not shown is the output with a single channel driven.
Under that condition 0 dBu In produces 0 dBu out.
https://ka-electronics.com

From the Stone's "Sympathy for the Devil"

Focus on the piano chords in the first 15 seconds.
For whatever reason, after 15 seconds the mono compatibility of the part changes.

When conventionally folded down to mono the piano in the intro is virtually missing with only vocals, percussion and bass appearing in the mono sum.

How it got this way, and why it changes around 15 seconds is anyone's guess.
https://ka-electronics.com

I just discovered the errors in the above sim (from GroupDIY) and why it departs from the actual real circuit.

(1) The mono output in the first example is not actively summed. The resistive summation has a 6 dB loss. Thus, when equal inputs are applied the actual sum should be +3 dB. The 6 dB resistive loss makes it appear to be -3 dB.

(2) The "out-of-phase" example should use two equal but opposite voltage sources to correctly model Left and Right. In normal use left and right are presented in common mode. (Single-ended, unbalanced, ground-referred.) The model treats the filter and the mono summation as a differential device fed by a differential source. The filter, and it's output network are not differential devices. Thus two equal but opposite voltage sources are required to correctly model out-of-polarity Left and Right inputs. The mono sum of the output driven by out-of-polarity inputs should also be +3 dB. In the model it's not: The differential to common mode conversion (where the outputs sum) combined with the loss of the resistively-summed output in the same network reduces the modeled output voltage by 12 dB from +3 to -9 dB.

Thanks for the citations Frank!
Lots of reading to do...
https://ka-electronics.com

I had a chance today to listen to a bunch of different songs folded to mono and I have to conclude that Studer was onto something when they took the Dome filter and used it to improve mono fold-down.

I compared the stereo presentation to conventional summed mono and the Studer 90 degree filter. Two songs in particular stand out.

The Red Hot Chili Peppers' "The Adventure of Rain Dance Maggie" also produced some interesting results. The stereo version is low end heavy in a pleasing way but becomes excessively so when mono'd conventionally. The whole balance of the mix changes in mono and it becomes bass-heavy and a little dark. The 90 degree filtered mono version maintains a more balanced mix. The bass is pulled back a tad, the side information brought forward and its a little brighter having a nice pop the conventional mono version lacks. Overall the 90 degree filtered version sounds more like the stereo version with only the image collapsed.

Not all material benefited from it but what did just seemed to have more of the "life" the stereo version had with conventional mono sounding duller and imbalanced.
https://ka-electronics.com