by matsaddress
Yes, most copy an old Neumann circuit; it's 1st order and far simpler circuit than you would first guess. Just a follower driving a 1u cap on both channels with a resistor between channels and then an output amp. Changing res between channels changes "mono-ing" frequency

In the Maselec console (MTC-2) there's an EE with a steeper slope although I can't remember if it's 2nd or 4th order (I presume 2nd). I know nothing of how this is implemented. I'm not an ME, so can't really comment on whether this is an improvement; although many years ago before this was released I suggested to my then boss I look into designing something higher order. I was told not to bother (he probably wanted me to be doing something more useful; I probably couldn't be arsed fixing whatever happened to be on my bench that day).

If you can assure me it doesn't get posted publicly or distributed, I can send you a re-drawing of one I was asked to cloned a couple of many years ago and some other docs I have. I guess there may be some people around here who have access the Neumann schematics they may wish to post.

mediatechnology wrote:I wanted to check back in and see how this is working out.

I wrapped up my phono preamp project this weekend. Yippee!

Regarding the rumble filter, I removed the 100R buildout resistors from both the phono preamp outputs (where they could muck up the input THAT1240 resistor precision) and the rumble filter outputs, moving a pair right before the output jacks, that is, after the rumble filter switch. I also untwisted the hookup wires carrying L and R signals. As far as I can tell, there is no perceptible change in crosstalk between the circuit now, earlier, or with the filter out of circuit. I can't hear any loss of image specificity or separation or quiet backgrounds being filled with cross channel pollution. The numbers may tell a different story, but I'd have to add some input buffering to test the filter as discussed in an earlier post.

If I ever need to build another one, I'll consider better component matching. The phase error introduced by the inverting amp is maybe something to look into for the next one too. If it seems to be a serious problem, going the all-1240 route with 6db attenuation would be the way to go. I can use my extra prototype boards for this, again, if ever...

Thanks again for the MS matrixing circuit and architecture and the feedback.

I've been wanting to build a filter and try it in the existing board's inserts.
I think your concept - a greater HPF frequency for side - has considerable merit vs. simply filtering L and R at a lower frequency.
I'm curious to see what both typical (and extreme) warp and rumble energy is seen in side.

by eweitzman
While the ideas were still simmering in my cranium, I recorded a bit of a warped LP and looked at the signal in Audition. Also did some mid/side processing and filtering like the circuit, and also used low pass filters to keep the out of phase stuff only. It's amazing how much was there and though subtle, how audible it was once identified. The out of phase bass rumble seems like air billowing forward in front of the speakers, giving an increased sense of envelopment and a deeper sense of the soundstage. Part of the vinyl illusion.

I opted for 3rd order filters and was limited by the prototype package board size to only two filters in the side channel. Ideally, a first order filter (cap) and switchable resistors for the elliptical filter frequencies used in LP mastering would be the way to go. Choosing which one to use on a particular recording would be hard, though. Picking resistor values might be a compromise as far as adding noise. A two pole six step series attenuator would be how I'd do it. You could go crazy with higher order filters and a six deck switch.

by mediatechnology
Interesting article from Bob Ludwig which discusses, among other things, the importance of a LF mono crossover when mastering for earbuds:


Almost all pop mixes are mixed with the bass and kick drum panned to the center which is proper as many people will be listening on boom boxes which have limited power and having a powerful center channel bass available to both speakers is ideal. Very early recordings of The Rolling Stones and The Beatles (to name two groups) were totally intended for mono and were recorded on 2-channel or 3-channel tape decks solely for creating a mono-only mix. When stereo became popular these early multi-track tapes were re-purposed for stereo and the bass and kick drum were typically locked into either the right or left channel.

With earbuds and headphones, this is very unnatural sounding and sometimes it is decided to filter the low bass into the center by mono-ing the signal somewhat. This sounds much better. This is definitely a decision based on current widespread use of earbuds, and it remains an important philosophical question when doing re-issues of old recordings with this problem.

He also goes on to discuss loudness and over-compression. His broadcast argument makes sense.

by mediatechnology
More applications of MS processing to "upmix" two channels to surround from Stereophile.com. 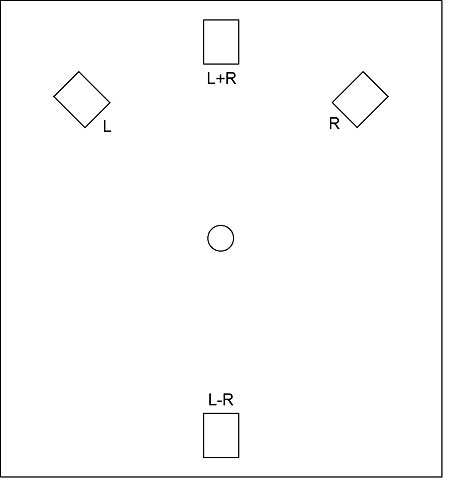 by emrr
Interesting review there, thanks.

Going to build myself a new mastering console with the MS matrix (love it, use this one https://www.dagoosemusic.nl/studio/stud ... g-console/ for 7/8 years!) but in this case with the insert modules as well. It will be a 2u unit with multiple inputs and outputs, output gain, polarity swap, LR swap and It will have two inserts with MS for EQ.
I want to make it switchable froms stereo to MS, so for the passive appoach I need 8 relays (this will work, use this right now), but it's also possible to use 4 relays by having the in/out active stages stilll in line.
I was wondering if this will work without gain or other problems.
Anyone?

by JR.
For the it's a small world department Bob Katz mentioned using one of your MS boards (modified) in a prototype tube gadget he made.