Thanks for checking in. Have been wondering how you were doing.
We did discuss in an email varying the top of the phantom resistors similar to what Paul Frindle did.
You are correct that if it was the only servo it would be no different then servo'ing the bases.

What caused me to think about this is going back to the original Neumann spec of 4% max current imbalance.
When I analyzed what 4% could produce and wrote about the dual servo I had forgotten about how much input termination reduces that 4% spread.
https://ka-electronics.com

Ah, dual servo loops, now I understand. Will have to think about this, whether it makes any difference in reality.

One other thing I was thinking about is whether your floating frontend helps to reduce distortion caused by common-mode signals. I've been using cascodec input stages for a while now, to keep the voltage across the input transistors constant and thus reduce distortion caused by common-mode signals modulating the input capacitance.
If a truely floating frontend would "ride" on the common-mode offset, it would have a similar effect. But IIRC, your common-mode servo that floats the frontend has some time-constant in there that basically means we're floting the fontend to some average voltage. This might help against distortion caused by microphones that temporarily draw more current (i.e. for loud signals), causing phantom voltage level on the input of the preamp to drop (if the rate of change is slower than the servo).
Top

I started counting and there are three servos if we count the common mode servo operating in feed-forward.
Instead of a "twin servo" (already taken) it's a triple servo. LOL. 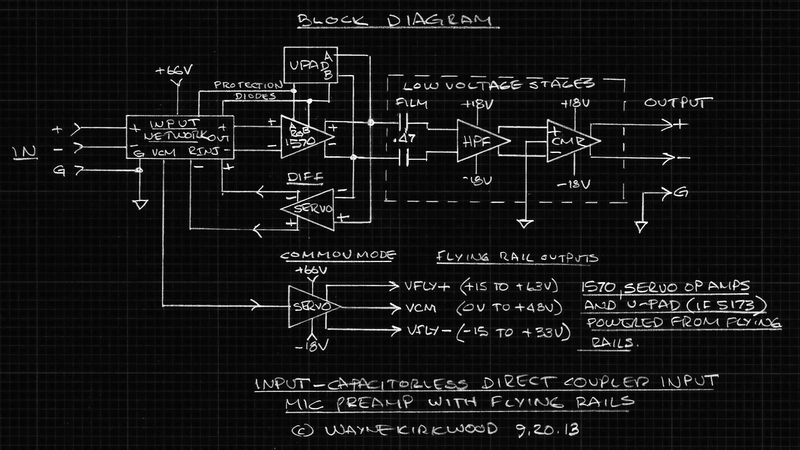 A micro could set some DPOTs and then shut itself off, unless you wake it up again... or not.

PS: I still like the idea of flying a ADC up to phantom voltage, but tweaky customers who might appreciate this approach want a better ADC than I have handy.
Cancel the "cancel culture", do not support mob hatred.
Top

Funny JR I was thinking of DPOTs too and having the DPOTs trim the input error as closely as possible and then, once trimmed,not reactivate until the input error grew outside a predefined window.
https://ka-electronics.com

The DPOT could hold a setting as long as power is not removed. I haven't looked lately but there might even be one with flash memory so it can keep a setting with power removed.

A calibration procedure ?
Initiated by the user and a warning led to tell when out of window.
I thought of this for servo loops that could be used to adjust, then frozen to keep the adjustment.
I see such a technic for a mike preamp: Half way between balancing with a trimmer and tracking with a servo.
Top

I think I've seen XLR chassis sockets with a switch that gets engaged once an XLR plug gets plugged in. That way a PIC (or some other logic) could detect when a mic gets connected and then run a callibration for a while and then store that value until the mic gets diconnected... but that way you wouldn't notice a user changing the mic on the other end of the mic cable. So it would probably also need to re-callibrate after phantom power gets toggled off and on again. And you still wouldn't catch mics that don't need phantom power.

This somehow brings us back to the original problem: Since the ciurcuit has DC gain equal to AC gain, 10mV of offset in the input can result in 10V of offset on the output (at 60dB gain). My gutt feeling tells me that as long as we have DC gain in there we have to get the correction on the input just right, and not just approximately. Otherwise the proposed second servo would need to do way more than just correcting the mismatch caused by Vbe differences.
Top

Calibration to take care of Vbe mismatch.
I understand, it would be nice to have it automatic, transparent to the user.
However you want the system to calibrate when all has been set and temperature stable and you do not want the system to go into calibration while recording.
I doubt it can be user transparent. I think it should stay under control and responsibility to the user with a push button to launch calibration and a warning led to tell it's done or need a recalibrate.
Perhaps, this is not nice from a commercial point of view.
Top

The original version of this preamp used injection at the bases so it had lots of range to correct both input offsets and delta-Vbe offsets.
What I originally showed might not have had enough range, but plenty more was available.

Olafmatt's servo that I used in the MC preamp works great at controlling the Vbe offset but I'm not sure it has enough range to also correct the larger offsets the mic presents.
https://ka-electronics.com