I got some BS107 N-CH MOSFETs and tested them with a ZM-1000 tube.
Unfortunately the BS107 has too much off-state leakage and causes some cathode glow.
I substituted the BS170 which previously worked and found that with this particular tube there was also some cathode glow as well even when the Drain is clamped at around 65V.

What also may be different is the power supply.
This experiment was made with a 555-based switcher - it could be that the large amount of ripple in my original HV supply dropped below the strike voltage of the tube.

With the switcher the MPSA42 300V NPN worked fine so it looks like MOSFETs and clamped LV bipolars such as the ULN2003 are risky with certain tubes or supplies.
I also played around with a muxed display approach and tried a classic MPSA92/MPSA42 PNP/NPN anode driver.

The more I think about it the more I like using an Arduino Nano and DS-series RTC board.
With a single 8 bit port I can mux anode and cathode drive for a 6 digit clock.

This is the classic NE555/IRF740-based flyback converter needed to get the +170V needed for the anodes.
It works pretty well being about 80-85% efficient and offers OK regulation.

Note that P1 is correctly-drawn.
In many of the schematics for this circuit the wiper and top of the pot are not connected to each other.
With the base circuit connected directly to the wiper loss of wiper contact causes the supply to run open loop, lose all regulation and go to the maximum output voltage.
https://ka-electronics.com

Now that I've decided to multiplex the ZM1000 Nixies I wanted to check some of the online assumptions many have made regarding drivers and refresh rates.

I used the test circuit below and either tied the cathode drive to +V for Anode multiplexing or the Anode lead to V+ to test cathode driving. A pulse generator is used to control the other input.

The 100Ω resistor in digit 8 serves as a shunt to measure cathode current indirectly.
The transistor has about 100 mV of Vsat so the voltage across the 100Ω, minus 100 mV, is an indication of anode/cathode current. 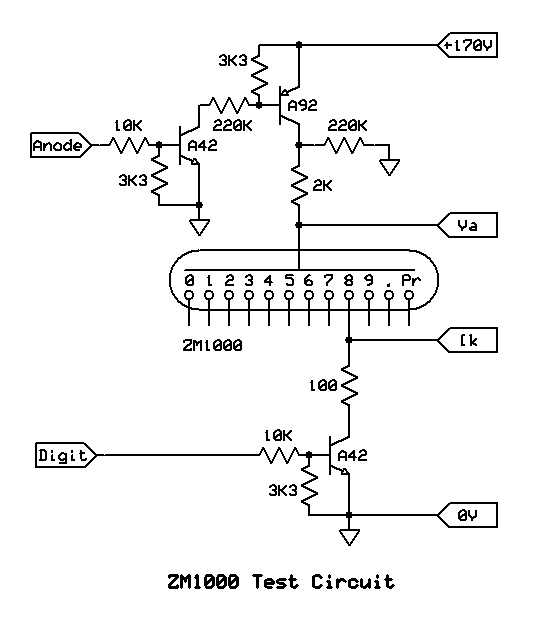 The following is the anode driver waveform versus cathode current. The peak current is just under 10 mA. 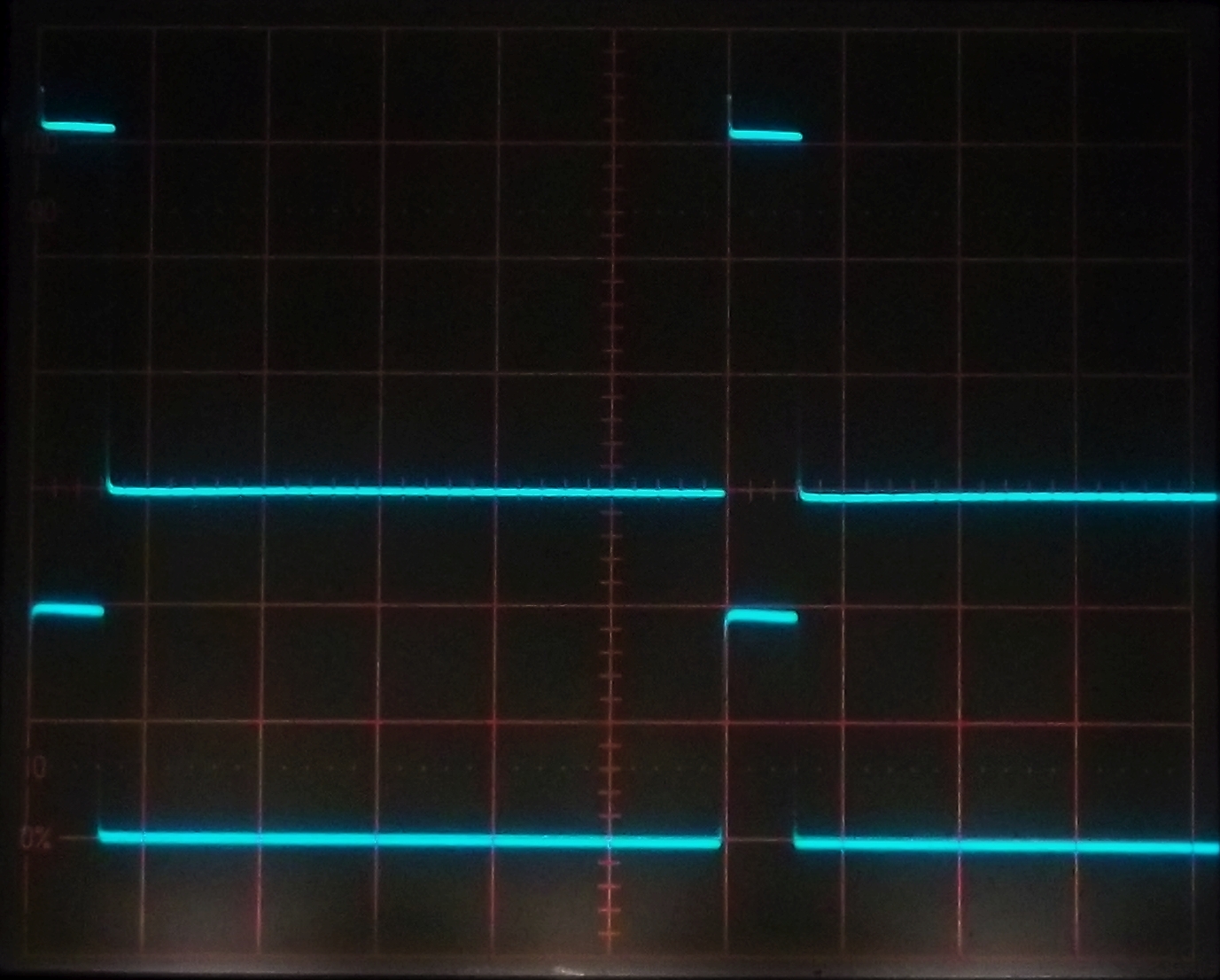 Most anode driver circuits I've seen using the MPSA42/MPSA92 have too high base-emitter resistors which extend the turn-off time and increase inter-digit blanking times. By lowering the B-E resistor to 3K3, a turn-off time of About 10 us can be obtained.

The following is anode voltage versus the base input of the anode driver on the falling edge. 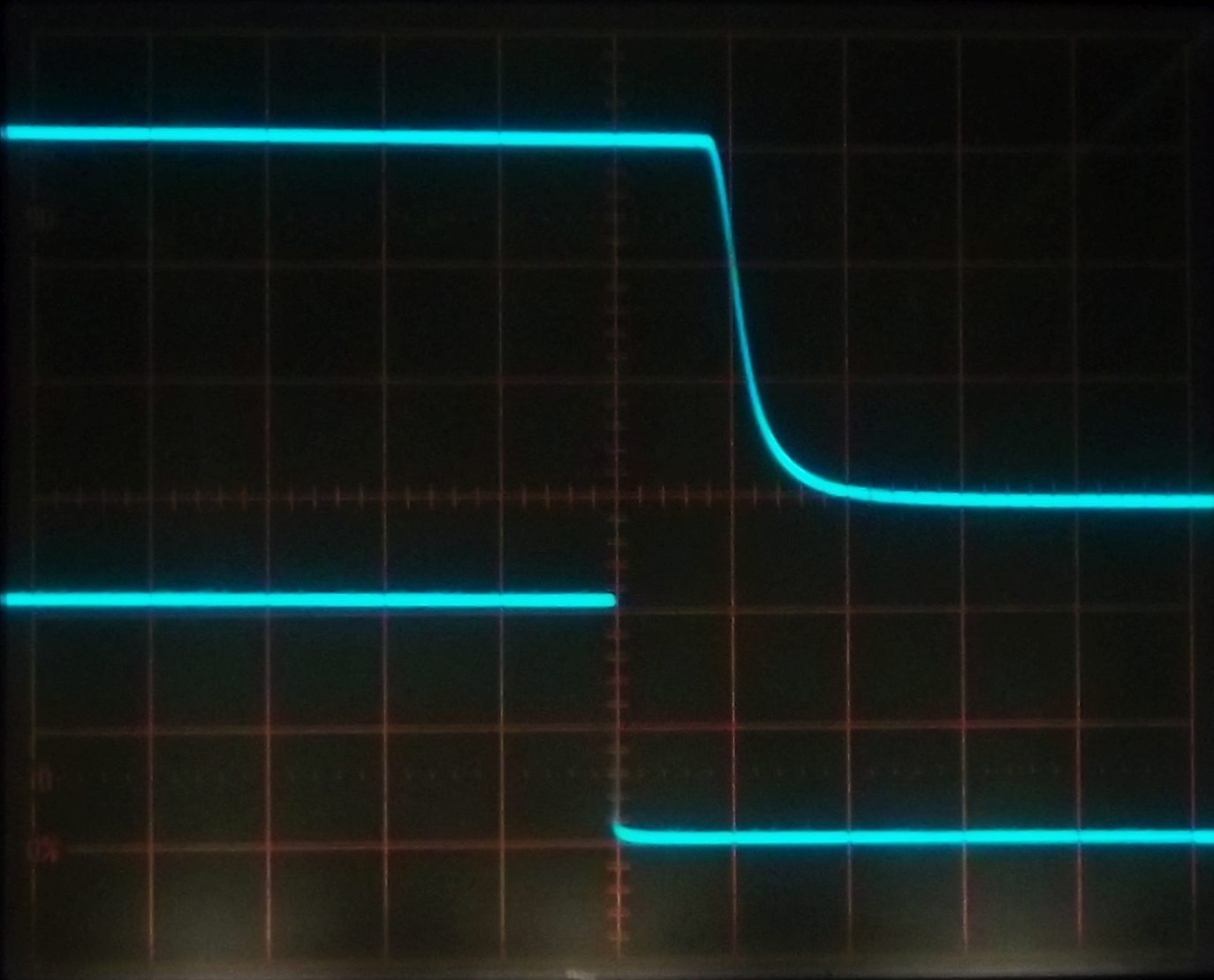 The image below compares the anode drive versus cathode current at turn-on. The "overshoot" on the anode's rising edge is the tube reaching the 170V "strike" voltage before ionization. The anode voltage then drops to about 150V after ignition. 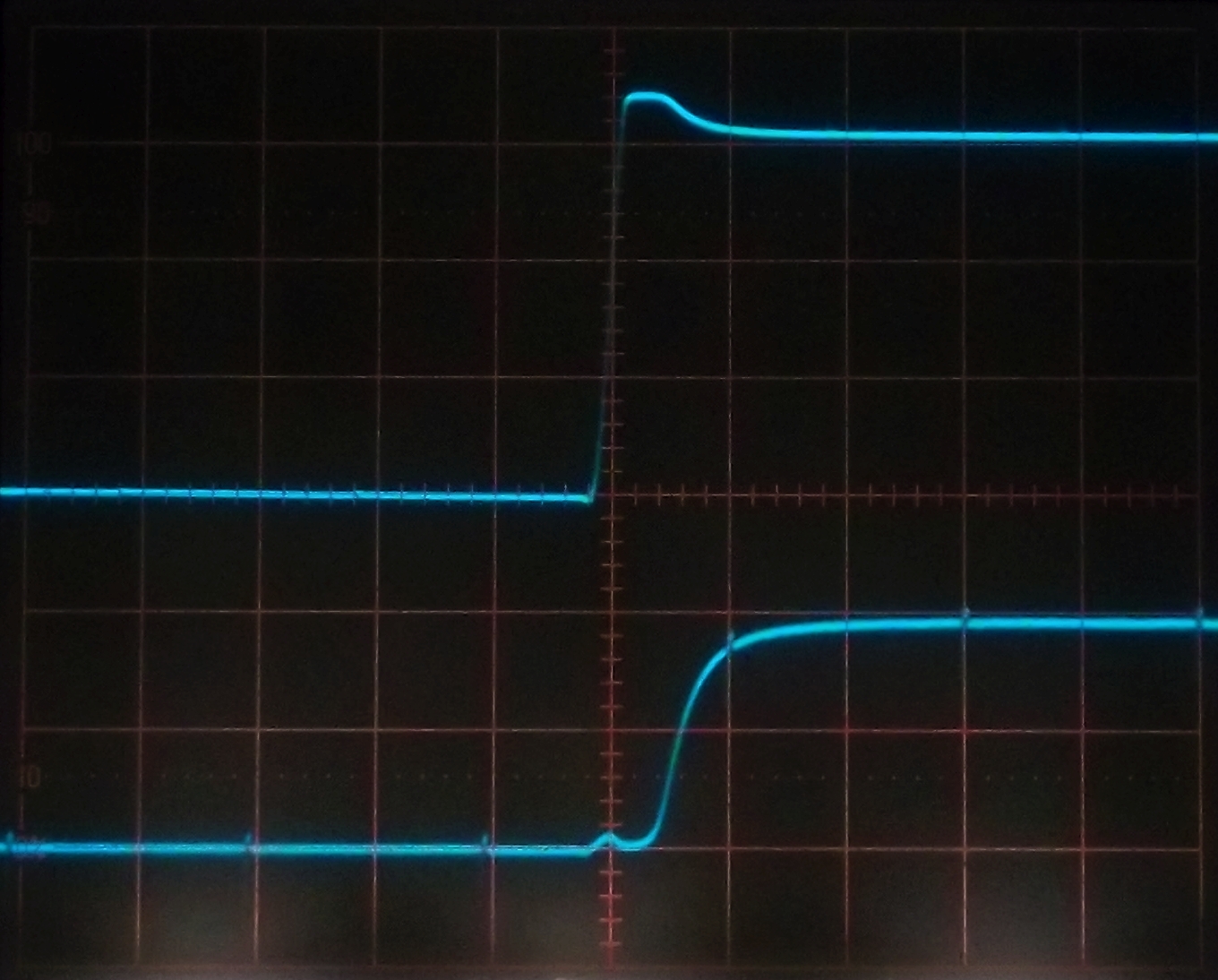 The image below compares the anode drive versus cathode current at turn-off. 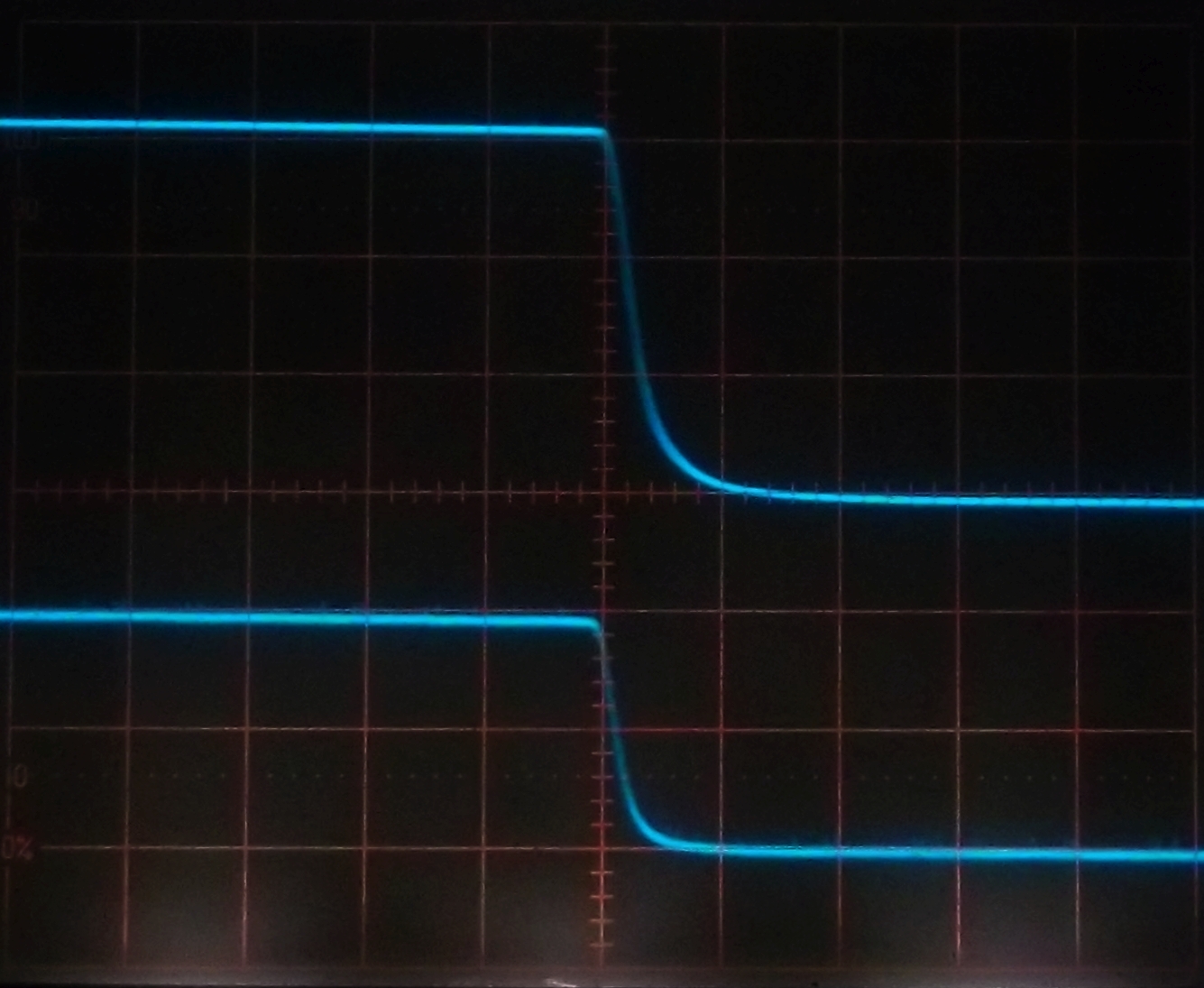 I also decided to look look at the anode voltage when the cathode is pulsed. The IR drop in the current limiting resistor shows the approximate 10 mA peak current. 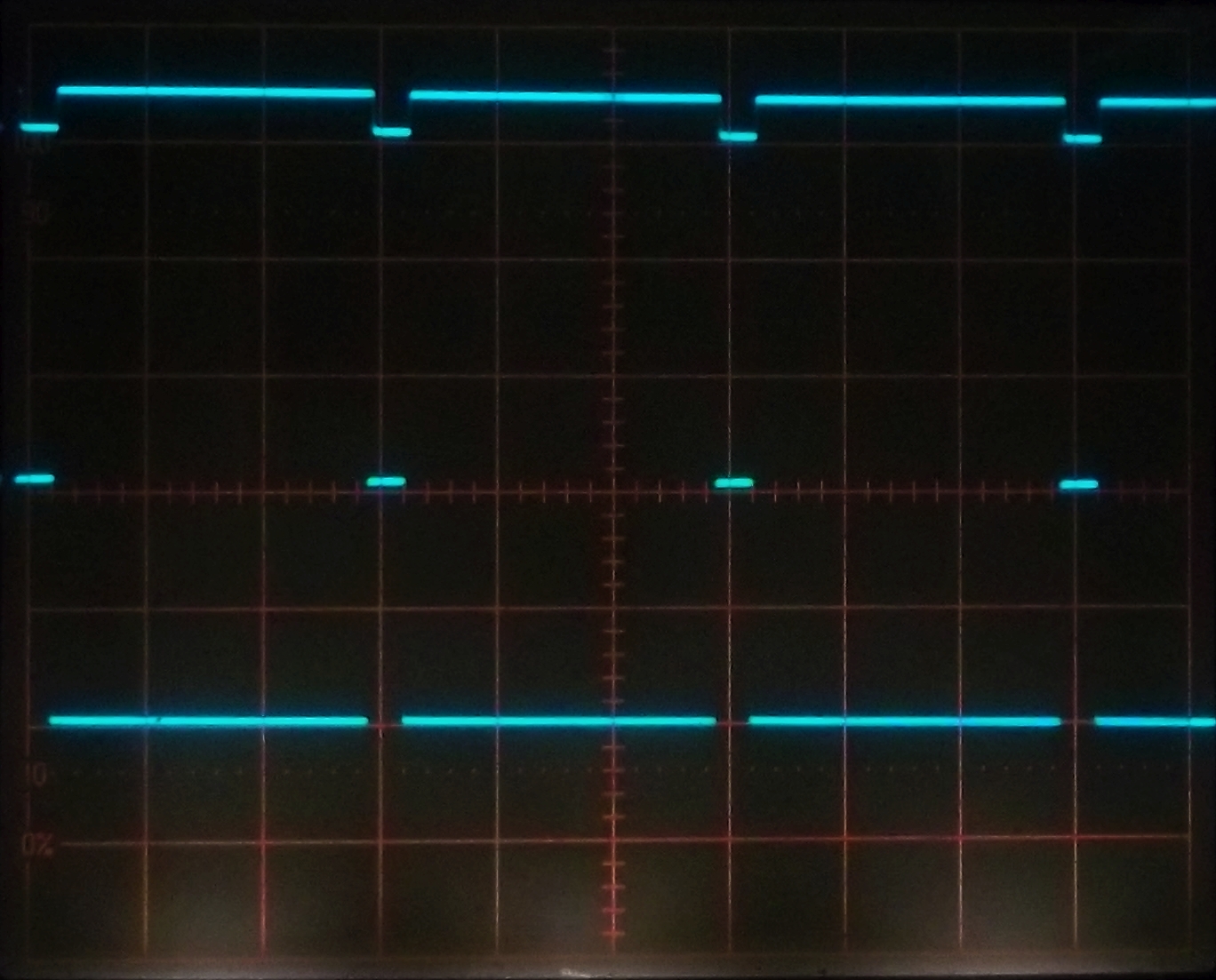 I need to wire up several tubes' cathodes in parallel and hook it up to the Arduino Nano I'll be using to mux the display to see what effects the additional capacitance will have.
From what I've measured it looks like the scanning time can be pretty fast and the inter-digit blanking fairly short with this tube.
https://ka-electronics.com

Back in the 80s a multiplexed a 100 segment vacuum fluorescent display for a kick ass peak/VU meter... Its a shame there was only one of those made and I don't even remember where it went.

I don't guess I've ever seen a VF with that many segments.
The VF tube I have from NEC is about 20 segments and IIRC used parallel drive.

SSL, MCI et al used gas discharge 100 and 200 segment meters that were 3 and 5 phase cathode drive.
I have one or two of them that would make a pretty level meter display.
https://ka-electronics.com

mediatechnology wrote: ↑
Thu Apr 22, 2021 9:21 am
I don't guess I've ever seen a VF with that many segments.
The VF tube I have from NEC is about 20 segments and IIRC used parallel drive.

SSL, MCI et al used gas discharge 100 and 200 segment meters that were 3 and 5 phase cathode drive.
I have one or two of them that would make a pretty level meter display.

I came up with a pretty clever (IMO) log (dB) to count conversion, based on decay of a capacitor (e^-t/rc). I never got around to bench testing it for low level linearity but it made a really nice blinky light display.