This is where we talk about testing, measuring and repairing things. Sometimes we have to repair the equipment we use to test, measure and repair other things. It's an endless cycle of fixing the broken things we need to fix other broken things.
Post Reply
15 posts

I've been using the Focusrite Scarlet 2i2 as my test and measurement front-end and found a quirk that users should be aware of.

The left channel of my 2i2 has very poor common mode rejection: 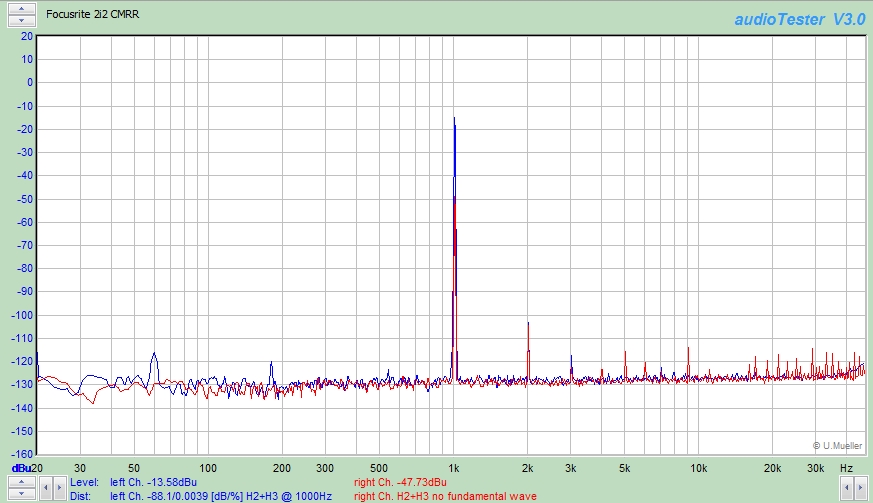 With the input cables shorted the difference in hum signature is pretty large: 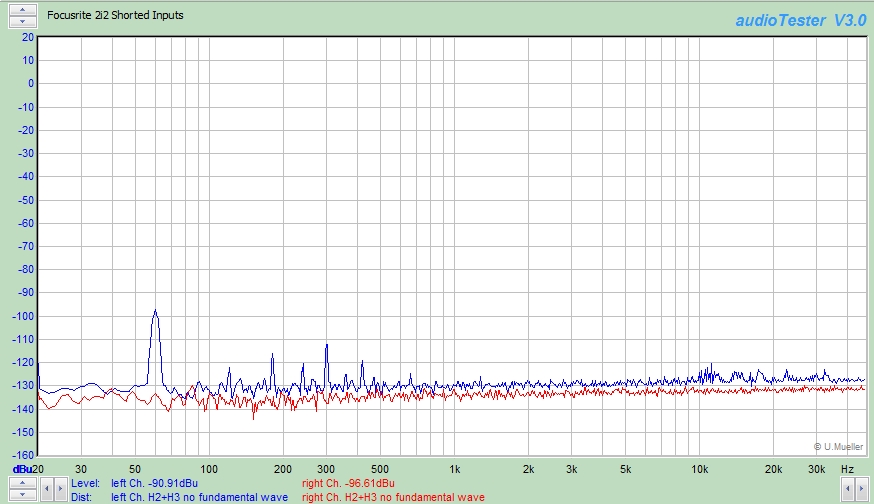 The input controls are at the 10 o'clock position which is unity gain.

The poor common mode rejection of the 2i2's Left input makes a THAT1646 balanced output appear noisier than it is.
Both channels are connected to the same 1646 output: 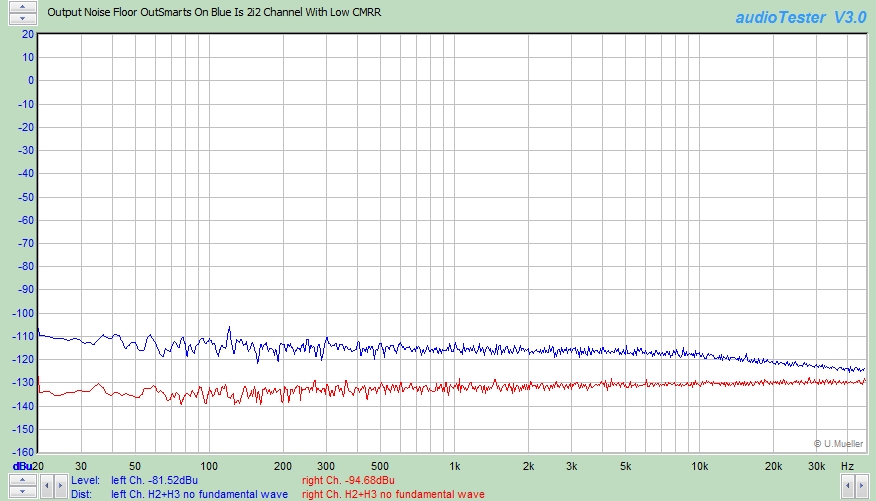 The left channel measures about 13 dB higher because the common mode noise in the 1646 output is being converted to a differential signal by the 2i2's "bad" input. (FWIW a DRV134 or SSM2142 would show similar characteristics due to all three parts having high CM gain.)
The right channel is near the noise floor of the 2i2 - the 1646 noise is a few dB lower.

When the 1646 OutSmarts circuitry is defeated the common mode output noise drops and the noise measurements are close to one another: 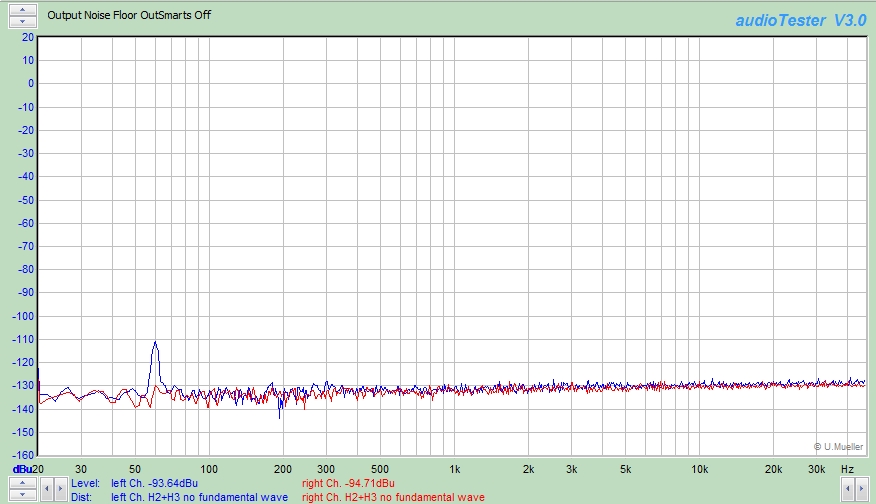 I don't know if I have defective 2i2 or not.
It seems hard to believe that component tolerance could be bad enough to make CMRR that low.

I've got a second 2i2 on order and am anxious to test it.

I would recommend everyone check the CMRR of their 2i2 inputs because it introduces measurement errors with active balanced outputs and has greatly reduced hum rejection.
https://ka-electronics.com
Top

I received a second Focusrite Scarlett 2i2 and it has good common mode rejection: 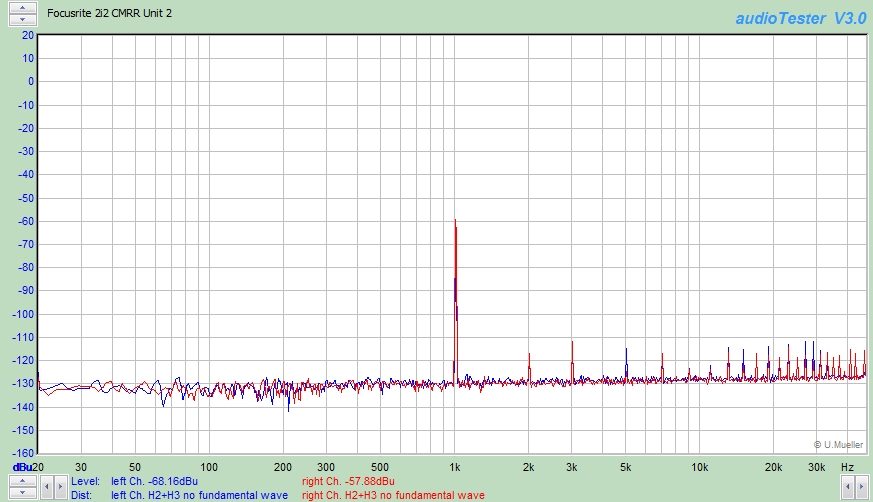 I'll use the first unit in an unbalanced environment and use the "good" 2i2 on the work bench.
https://ka-electronics.com
Top

My area of interest is the f2-f1 IMD component at 1 kHz.

This is the loopback IMD performance with dual tones generated by ARTA.
Both tones are "internally" summed rather than producing 19 kHz on the left and 20 kHz on the right with passive summation.
Internal summing provides an indication of the entire chain of D/A, output stage, input and A/D.

The first measurement is with a 10 dB pad in the loopback path in order to operate the input stage at unity gain and near the A/D's 0 dBu, -9 dBFS, "sweet spot." 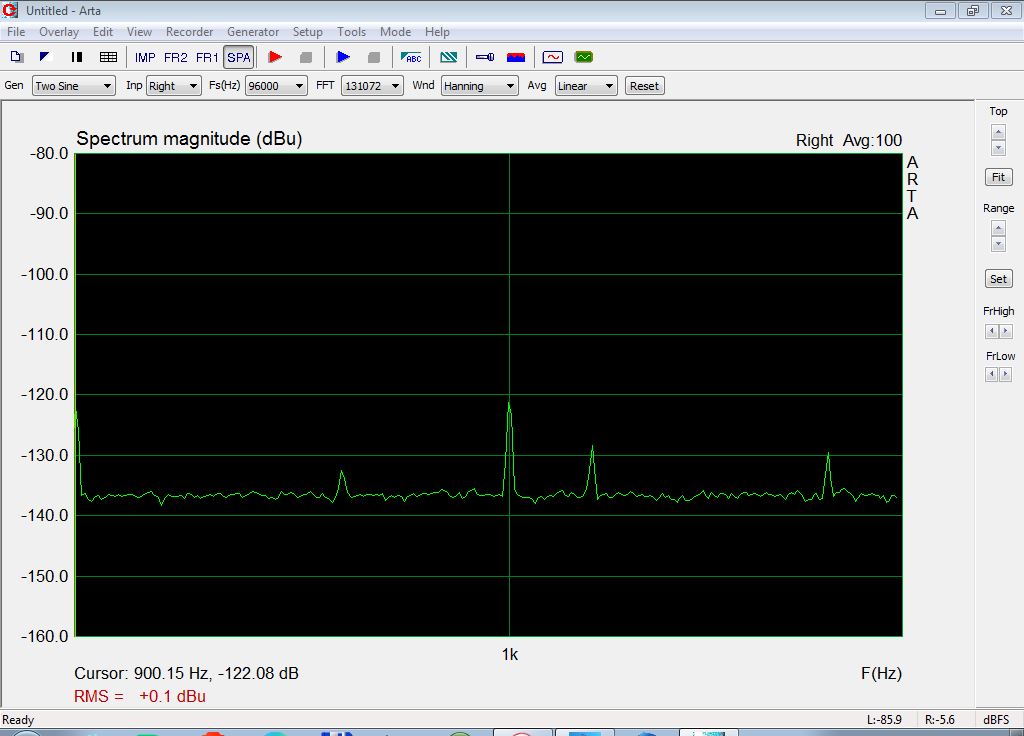 This is with no pad and the input level reduced to accept the +10 dBu output. 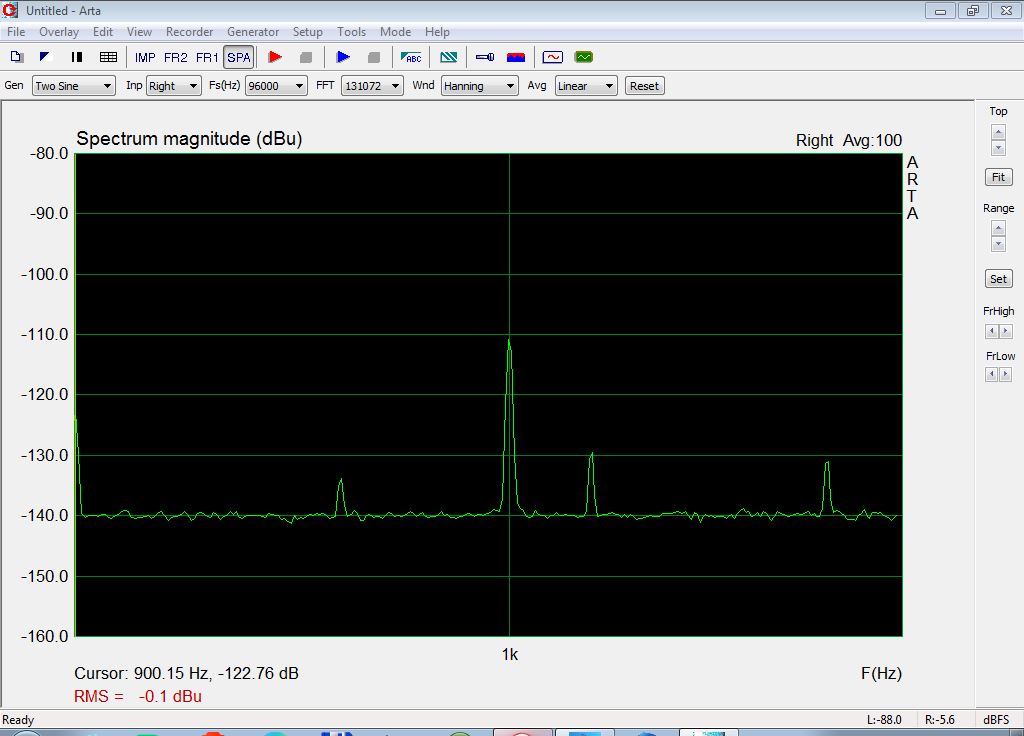 The overall IMD performance of the 2i2 is pretty good.

In another post I'll explain what I've been measuring.
https://ka-electronics.com
Top

I've found different IMD results between channels for my test and measurement Focusrite 2i2.

The left channel A/D has about 6-9 dB more IM than the right.

For the lowest IM measurements I'll use the Left Channel Output feeding the Right Channel Input for a residual level of -124 dBc.
In the right channel there could be some cancellation between Left D/A and Right A/D making it measure slightly better than it is.
There's some obvious uncertainty: -120 dBc is probably a safe limit.

I may flip the polarity of the inputs to see if the results change...
https://ka-electronics.com
Top

I may flip the polarity of the inputs to see if the results change...

And they do change. Significantly.

The best combination is consistently about -120 dBc IM2.
If I reverse the polarity it rises to about -105 dBc showing that the D/A and A/D are cancelling/adding to one another.

Today I generated 19 kHz on the Left output and 20 kHz on the Right.
I resistively summed them using 1KΩ series resistors.

The results are now that of the Focusrite 2i2's input stage and A/D in isolation and are consistent regardless of polarity.

I think I now have a better idea of what the minimum measurement capability is.
https://ka-electronics.com
Top
Post Reply
15 posts