Where we discuss new analog design ideas for Pro Audio and modern spins on vintage ones.
Post Reply
10 posts • Page 1 of 1

Jung, Self and others have written about the use of impedance balancing resistors to minimize non-inverting op amp common mode distortion. Self writes in Small Signal Design:

Once again, this can be cured by inserting an equal resistance in the feedback path of the voltage-follower, as in Figure 4.3d above. This gives the ‘Cancel’ trace in Figure 4.10. Adding resistances for distortion cancellation in this way has the obvious disadvantage that they introduce extra Johnson noise into the circuit. Another point is that stages of this kind are often driven from pot wipers, so the source impedance is variable, ranging between zero and one-quarter of the pot track resistance. Setting a balancing impedance in the other opamp input to a mid-value, i.e. one-eighth of the track resistance, should reduce the average amount of input distortion, but it is inevitably a compromise.

This post explores the common mode distortion of a voltage follower with various degrees of impedance imbalance in series with the inverting (feedback) and non-inverting inputs.

Resistors are also often inserted in series with one of the inputs to protect the back-to-back diodes across many op amp's differential inputs. The NE5532 and LME49720 both have differential protection diodes. This is JRC's recommendation:

For protection purposes I'm not sure it makes much difference if the 1K is inserted in series with the inverting input instead of the non inverting one.

The test circuit uses an ULDO-Nacho oscillator/filter to feed the DUT. The output of the DUT feeds the 1 kHz notch filter input which has +40 dB of post-filter gain.

The tests are at +20 dBu (just below the clipping point with +/-15V supplies) and at +14 dBu which is the output level of an attenuator fed by +20 at it's maximum Thevenin source impedance point at -6 dB attenuation. 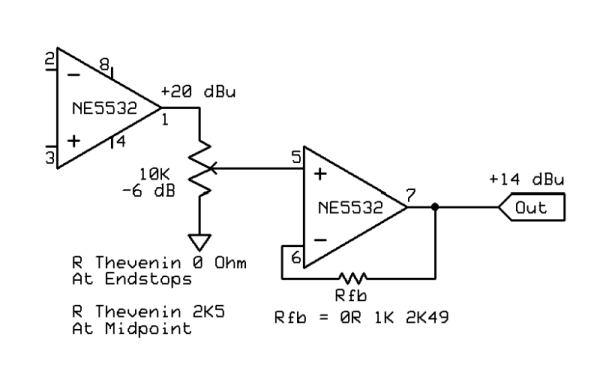 The above figure is simplified. Ignore for the sake of this discussion op amp bias current in the wiper.

A 10KΩ pot has its maximum source impedance of 2.5 KΩ at mid-rotation.

In the +14 dBu tests the most relevant ones for my purposes (buffering a 10K stepped switch) are those made with a 2K49Ω source impedance.

A 1M pt FFT is performed on the Nacho notch filter output. The y-axis displays dBc (dB below carrier).

The first FFT is the oscillator loopback. THD calculation requires correction for the notch filter insertion. The actual THD is displayed below the FFT. 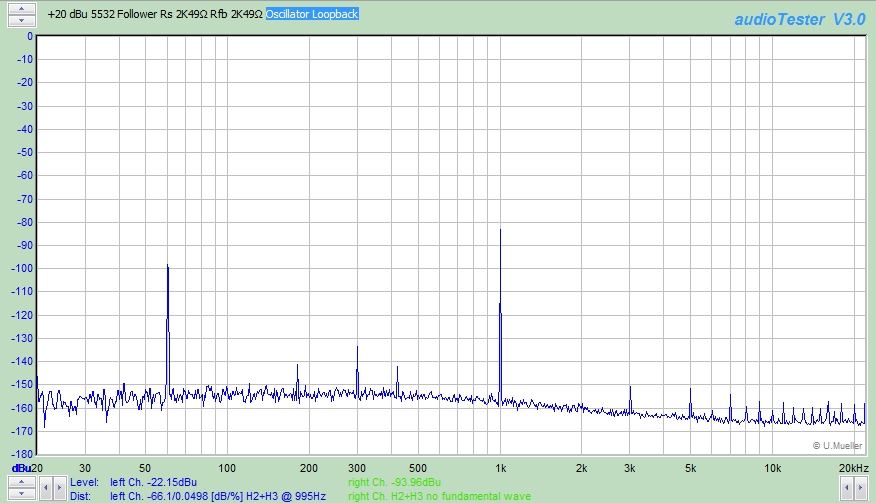 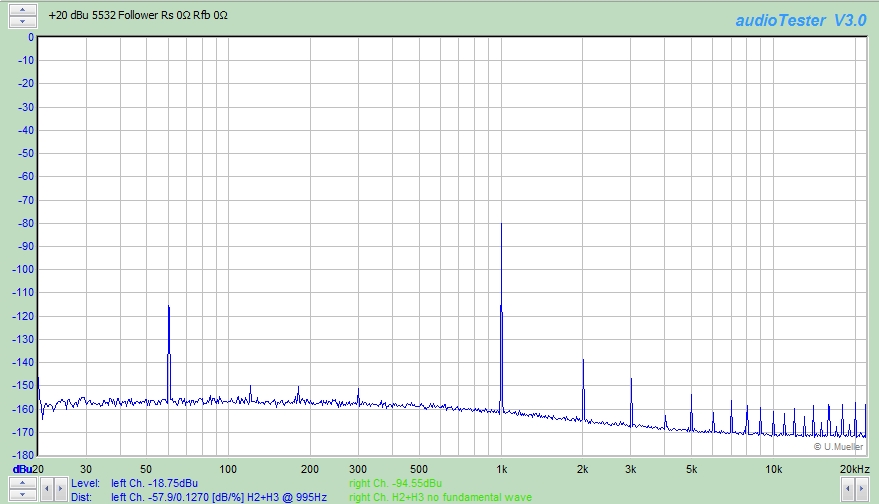 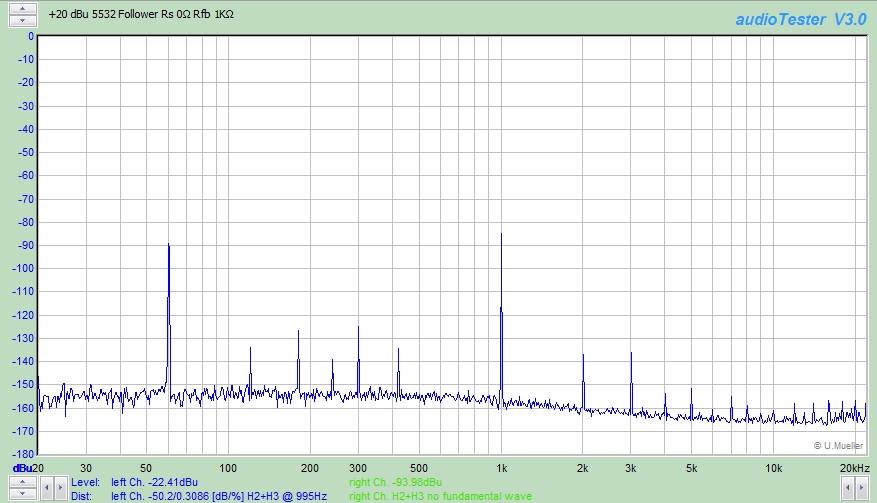 Note that although the third harmonic has increased significantly in the 0/1KΩ example compared to 0/0Ω the overall distortion signature is simpler with less higher-order components. The second harmonic is at a similar level to the 0/0Ω measurements and thus, due to it's increased weighting from the filter's 9 dB insertion loss, dominates the overall THD measurement. (IMO third harmonic compressive distortion, which intermodulates less than second, is less audible. To the ear even-order also carries greater weight.) 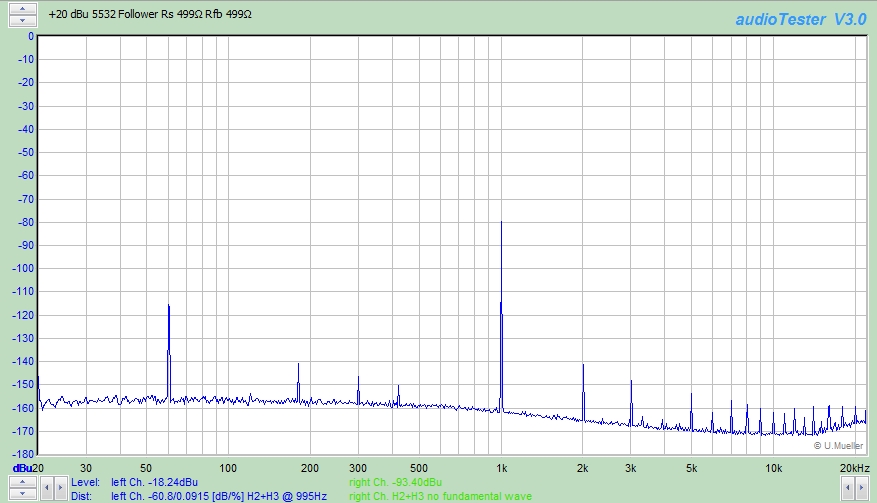 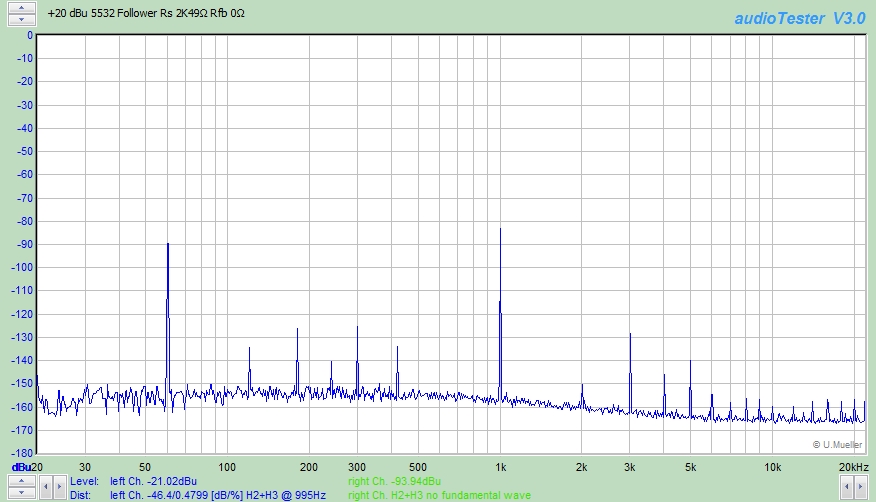 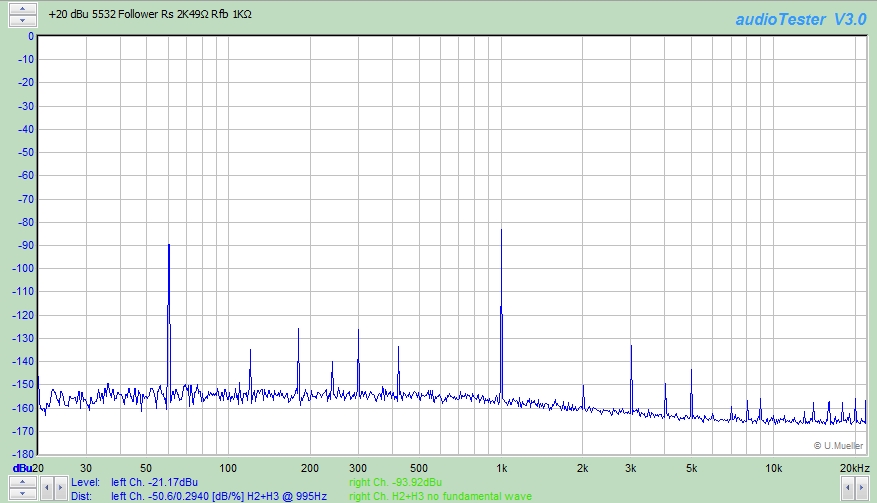 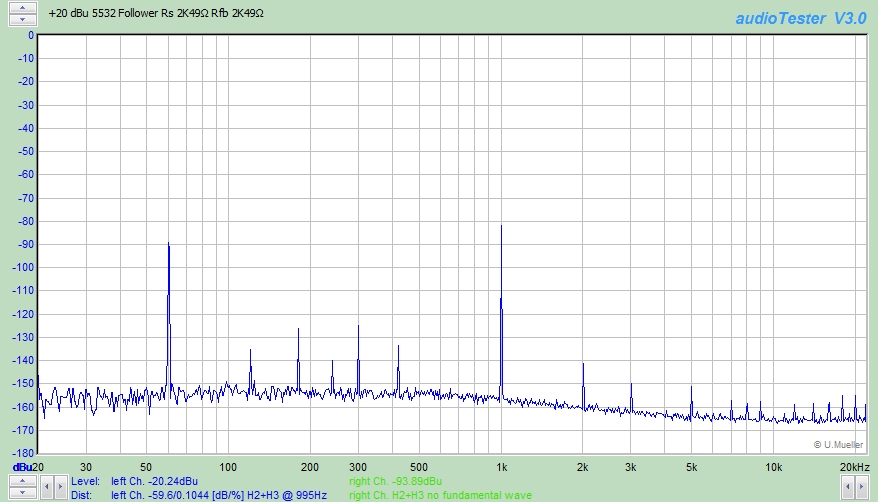 
Some measurements at +14 dBu 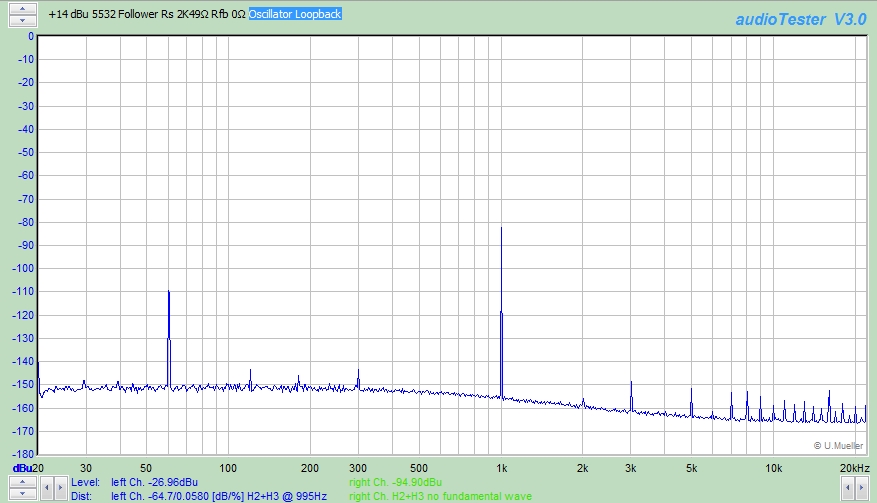 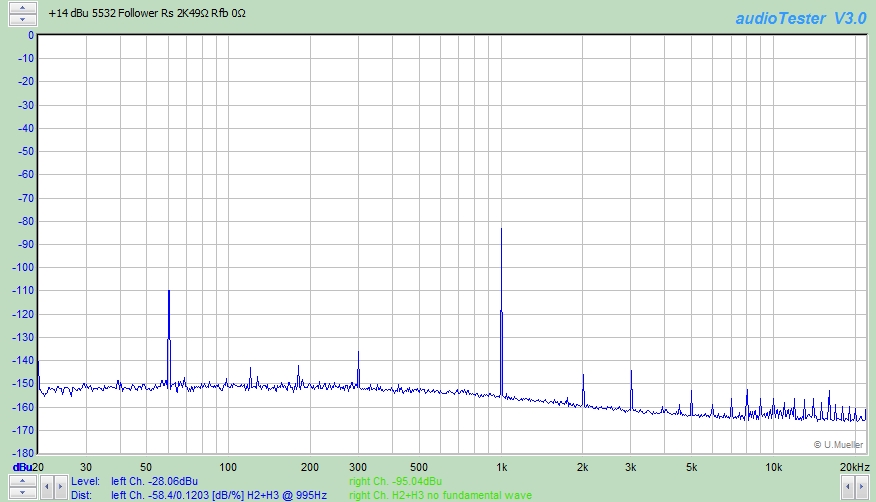 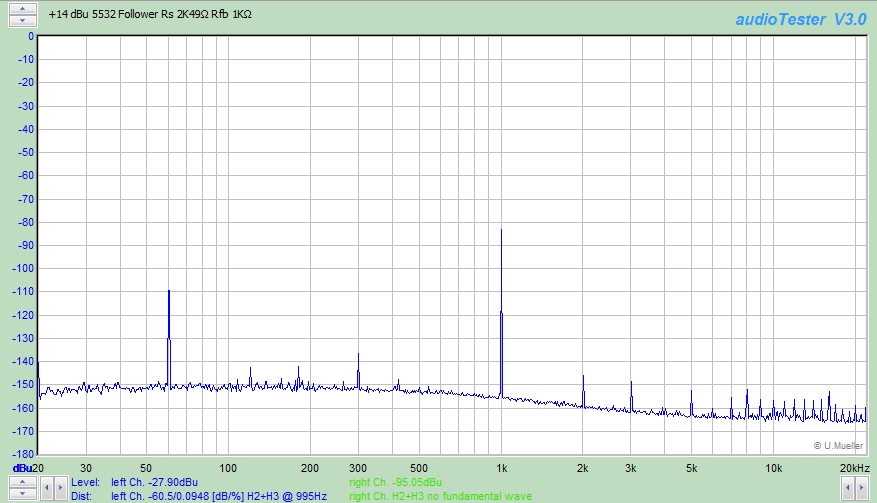 
My conclusions for the NE5532 are that if current-limiting resistors are used to protect the diodes the CM distortion is lower if the 1K is split into two 499Ω in series with each input. 499/499Ω has about 2 dB less distortion than 0/0Ω.

This assumes that the driving source impedance is a "0Ω" op amp output. The resistors cannot be made too large or they'll introduce Johnson noise.

If the follower is going to be used to buffer a 10KΩ pot or stepped attenuator the 1K Rfb seems to be a good compromise between full on and - 6dB attenuation. The 2K49/1KΩ configuration has a 1.4 dB distortion advantage over the 2K49/0Ω values at +14 dBu.

Making Rfb 0Ω is not really an option however because it eliminates input diode protection.

It has also been shown that a 0Ω Rfb produces a more complex higher-order distortion signature.

I'll post some quick OPA2134 measurements which show, in this configuration, the superiority of the 5532.
https://ka-electronics.com
Top

You'll have much higher impact inserting this resistor in a FET-input opamp voltage follower circuit. With an NE5532, it doesn't make as much impact - distortion figures are very low anyway. This is also what Self writes in his book.
Top

I also found that to be true.

I haven't posted my OPA2134 measurements where the effect is quite large.

I'll be using a 5532 primarily in the Wet Dry Mix Add's voltage follower which is why I focused on that first.
The OPA2134 will be recommended in that circuit when a pot is used due to its much lower bias current.
https://ka-electronics.com
Top

I'd reccomend an OPA1642 over a 2134 if you could still buy them right now, but it seems they'll be out of stock for quite a long time. LM4562 can work well, if you keep the input impedances low enough - usually gives an audible improvement over the 5532 in all circuits, with proper PS decoupling.

By the way, sometimes biasing the 5532 output in class A with a BJT and a pair of diodes from the + supply helps cleaning the signal up a bit.
Top

hellalive wrote: ↑Mon Jun 13, 2022 6:50 am I'd reccomend an OPA1642 over a 2134 if you could still buy them right now, but it seems they'll be out of stock for quite a long time. LM4562 can work well, if you keep the input impedances low enough - usually gives an audible improvement over the 5532 in all circuits, with proper PS decoupling.

By the way, sometimes biasing the 5532 output in class A with a BJT and a pair of diodes from the + supply helps cleaning the signal up a bit.

The Flat Moving Coil preamp I make keeps the 5532 in heavy class-A and it does astonishingly well.

OPA-anything is long lead time. I saw one delivery in 2024 recently. Most of the parts I use are being quoted September 2023.
I have been putting in a stock of OPA2134s in DIP in anticipation of these lead times.
Newark/Farnell/Avnet have some right now. Digi-Key and Mouser no.
From Monday to Thursday of last week the price increased 5.3%.

Long lead times on OPA-anything drove my decision to focus, for my purposes, on the 5532.
NJM's lead times are stretching out but I have what I hope to be a near lifetime supply.

I have OPA1642s on a DIP adapter and I found their output current capability lacking. I measured an Isc of 28 mA.
I've read the large area FETs of the OPA1642 input reduced the available real estate for the output devices.
The OPA1612 has an almost identical output stage topology and it produces about 48 mA.
The 1642 and 2604 were the weakest outputs in the lot.
An OPA2134 measured 44 mA.
An OPA1656 is around 100 mA IIRC so it looks like TI learned their lesson on wimpy outputs.

I do not like the LM4562 or LME49720 for a number of reasons and in my ULDO oscillator and MM phono preamps they are markedly inferior to the NJM5532s or NJM2068 I use.

The LM4562/LME49720 are highly EMI-prone.
No other op amp I've tested comes close to the LME49720s ability to rectify DECT 6 and Wifi.
I've actually thought about posting a WiFi sniffer probe using one.
I'm not the only one to document this and its universal regardless of the circuit or layout its being used in.

The LM4562/LME49720 are subject to noisy date codes and burst noise.
At one point Viktor M was rejecting 30-40% of his LM4562s for use in his oscillator due to noise.
I've documented in this forum and to the TI e2e forum their burst noise.
I had to throw away a bunch of the LME49860(?) the now-disco'd HV version of the LM4562 due to hopeless burst noise.

The LM4562/LME49720 are, in certain unique circumstances of high circuit impedances and low supply voltages, capable of latching up.
It turns out that the start-up bias current is much higher than their stabilized bias current.
I've never used the product this way but other have attempted to use it like a FET input counting on that 10 nA bias current.

I was originally going to ship LME49720s in my Dual Class-A units because, when tightly shielded, they do measure slightly better.
After looking at an FFT of all the spurs at 100 Hz multiples from the DECT 6 base station across the room on an unshielded unit I decided that it simply wasn't worth it.
OPA2134s, or anything else dropped in those sockets, worked fine.
The 5532 in that socket, due to its' phase response "kink" and nested feedback, requires a bit of over compensation compared to an OPA-anything.

In a MM phono preamp my tests show the LM4562/LME49720's bias current cancellation makes its noise performance worse than a 5532, OPA2134, NJM2114 or even the dual OP27.
This is when you find a "good" one that doesn't have these random bursts...
The lowly NJM2068 outperforms all of them: NJM found the sweet spot balance between voltage and current noise for an MM preamp.
The NJM2068 also measured an ouput Isc of 58 mA which is pretty respectable.

For a FET input op amp I want to try the OPA1656.
Brown Dog have some in stock to mount on adapters.

So at the moment an OPA-anything that I don't physically possess is a non-starter until 2023 or 2024.
https://ka-electronics.com
Top

Yes, LM4562 are EMI-prone, and need proper filtering, but I never had very big issues with them - never used in phono preamps tho; they are not suited to high impedance circuits anyway.

I only use the NJM2068 in my MM preamp.
In most other applications it doesn't measure particularly well THD-wise. Not bad, just not great.
I think NJR "tuned" a 4558/4559/4560 design specifically for MM preamps.
It's a PNP input.
I've seen it however in a lot of consumer gear including my old EMU-0404 sound card.

I've never figured out how to filter an LME49720 without an enclosure.
It seems airborne into the package or leadframe.
My hunch is that the ESD diodes and leadframe/bonding wires (or something) is resonant and the input circuit/bias compensation prone to rectification.

With the OP27/270 as an exception I find that bias current compensation usually gets in the way of making a quiet MM preamp.
I like the OPA1612 but as an MM preamp its lacking in the noise department.

I'll try and dredge up links to my LME49720 complaints as well as post the OPA2134 CM tests.
https://ka-electronics.com
Top 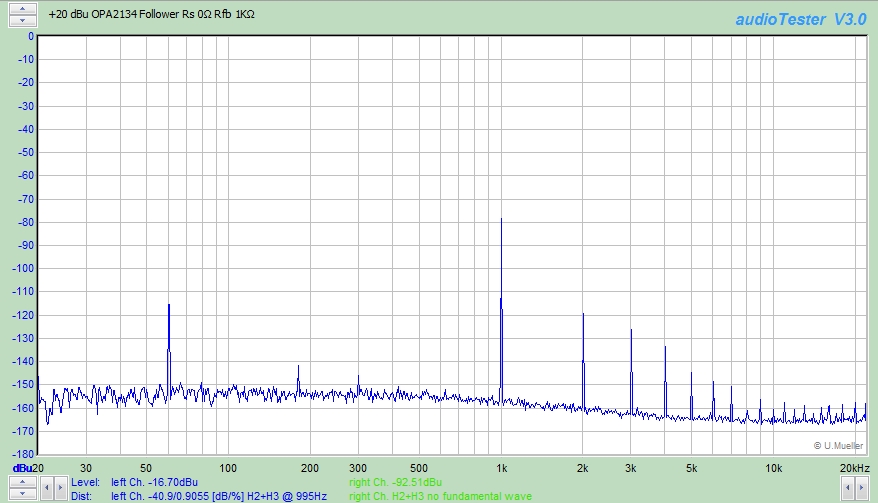 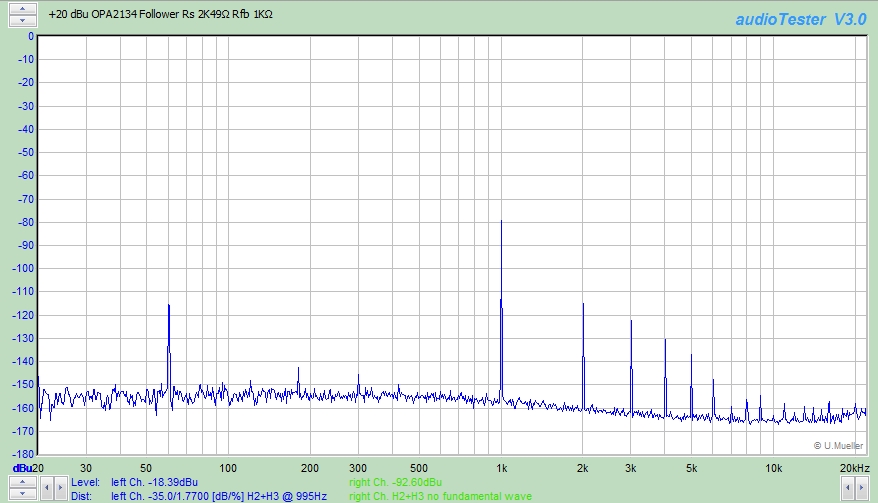 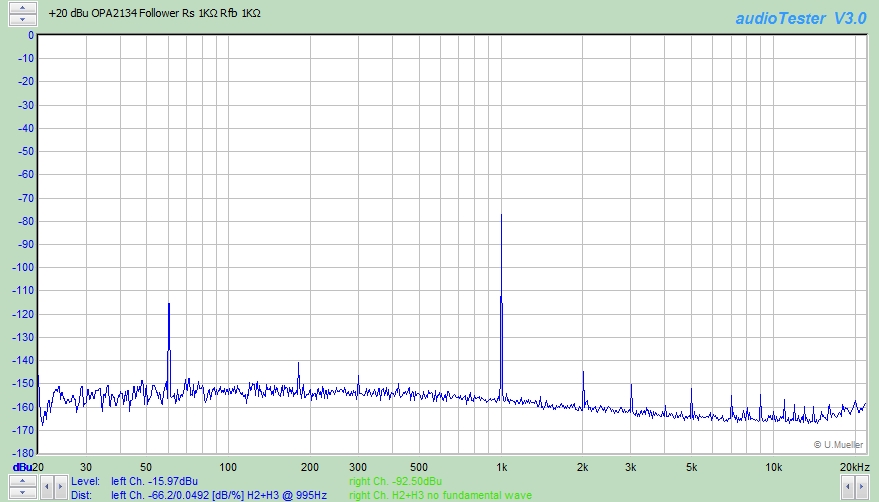 This is what we should expect with a FET input op amp having modest delta-C input modulation.

The OPA1642 and presumably the OPA1656 have smaller delta-C variations vs. input voltage and should measure better.

If we wanted a very bad example we should look at a TL072.
https://ka-electronics.com
Top

Looks like everything is workign as expected with the 2134.

I have to add to my previous postings that the LM4562 has actually more current noise than the 5532, and talking noise alone I bet the 5532 would perform better in a MM preamp, and maybe a FET opamp even better, but I also have to say I'm not familiar with those circuits.

Feels like the 5532 is still hard to beat working with a source resistance that's around, let's say, 3-5k, while the 4562 should perform better with lower values.

Hope you find some more material on shot noise in 4562/49720, because I'm very interested, in particular if you consider that right now the price of the 4562 dropped significantly in Europe, while the price of the 5532 did rise quite a bit.

I thought when I posted these I would present the prettiest of the two first.

I haven't tested recent lots of the LME49720 to know if they solved the burst noise problem.
TI admitted they don't screen for it because the test time is too long.

I've never seen burst noise with the limited number of OPA1612 samples I have.
The one odd thing about the 1612 and a few other products in the OPA16XX line is the rising output impedance as frequency decreases.
That's always bothered me.
https://ka-electronics.com
Top
Post Reply
10 posts • Page 1 of 1