For those that buy a "kit" including PC board. semiconductors and matched capacitors use this Project Manager link.
New FMCP-28 PCB No Semiconductors:
https://www.mouser.com/ProjectManager/P ... 929e5b9205 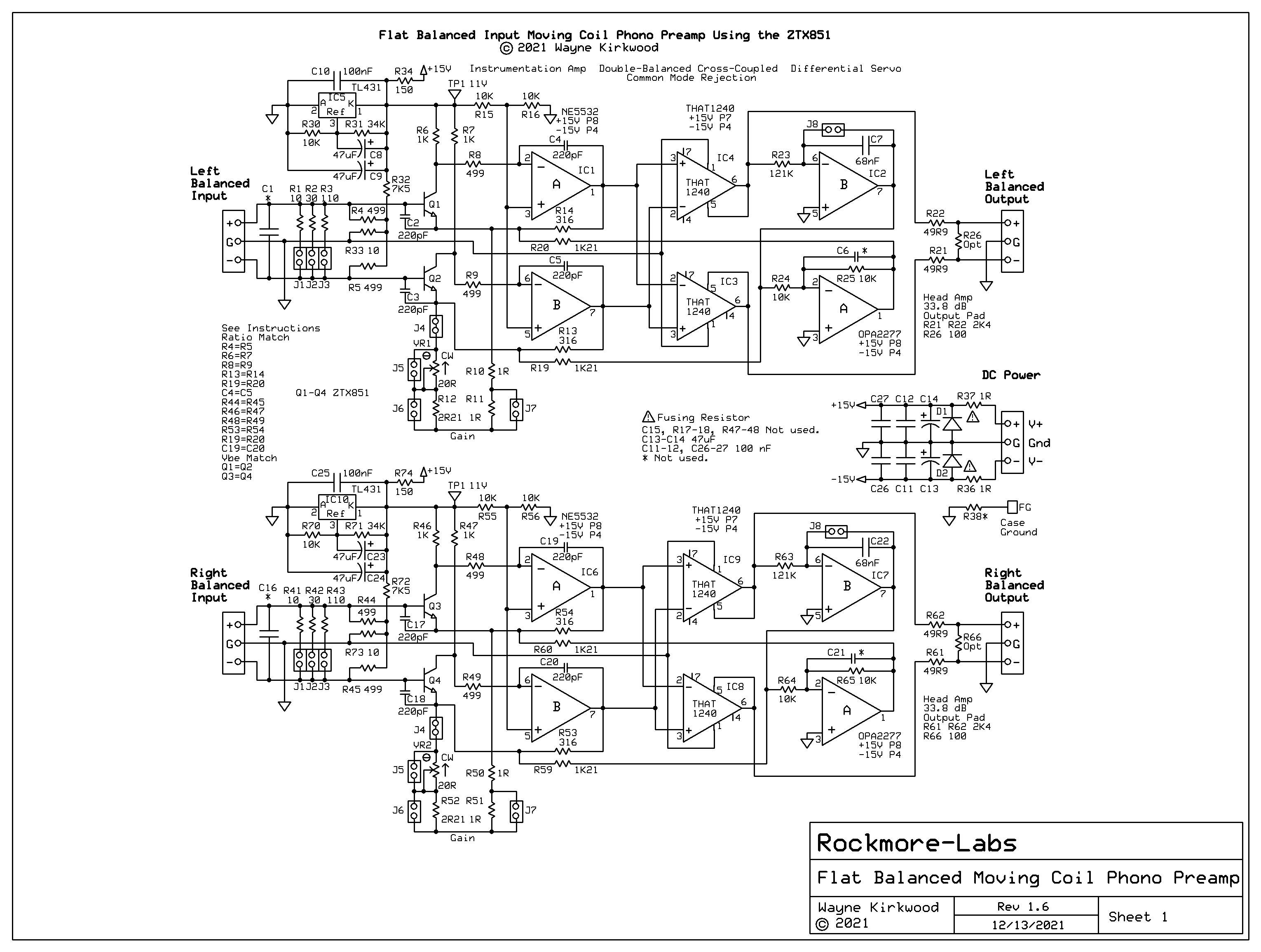 Q1 and Q2 are a hand-matched differential pair selected to have Vbe within 1 mV.* R6 and R7 are the collector loads. Emitter current is "sunk" by IC1A and IC1B through R14 and R13 to provide DC feedback and set the operating point. The nominal operating current for the front end is 5.5 mA per device. The bias control points are the noninverting inputs of IC1A and IC1B. IC1A servos collector current by sinking a nearly-identical emitter current through R14. The output voltage at IC1A and IC1B is about -2.48 VDC. Because it supplies emitter current IC1 operates in heavy class-A. (*For more information on how to match the input transistors see: https://proaudiodesignforum.com/forum/p ... f=6&t=1153)

The outputs of IC3 and IC4 feed both the output Phoenix connector through R21 and R22.

To use the FMCP as a head amp the values of R21/R22 can be increased and a 100Ω installed at R26. This provides a 33.8 dB pad suitable for driving the input of an MM preamp.

A servo is used to eliminate the output offset developed by Q1 and Q2's Vbe mismatch. To provide servo correction the emitter currents of Q1 and Q2 are varied.

Local DC feedback, "the op-amp around the transistor," compares the voltage control points at the non inverting inputs of IC1A and IC1B to the collector voltages at the inverting inputs.

IC2, an OPA2277, along with C7 and R23-R25 form a differential output integrator. The outputs of IC2 feed R19 and R20 to inject a differential correction voltage back into the emitters of Q1 and Q2. J8 defeats servo operation for testing.

The servo time constant, the differential gain inside the servo control loop and the attenuation provided by R19/R20 and the gain setting resistor Rg sets the low pass response. When servo feedback is injected back into the input stage the result is a derived, subtractive, single-order high pass filter. The servo control point is not affected by front-end gain. The -3 dB point of the high pass response is approximately 10 Hz and, owing to the servo control point location, does not vary with front-end gain.

You're moving along quickly.
https://ka-electronics.com
Top

Should probably mention a "mistake" that both myself and another customer have made and that is to hook it up to a DL-103 and forget to remove the 10Ω test termination.
They do sound very dark and constrained at 10Ω.
It was one of those "Duh!" moments....
https://ka-electronics.com
Top

Sorry if I missed it. Is there a BOM or a cart or a set up for this?
Top
Post Reply
56 posts