High-Value Resistors for Mic Builders and Tempcos for Synths

High-Value Resistors for Mic Builders and Tempcos for Synths

I'm stocking a couple of hard-to-find resistors that some members here may eventually need.

The other one I stock is the Precision Resistor PT-146 (PT146). This is a 3500 ppm temperature compensating 1K 1% ideal for use in log and anitlog amplifiers. The 1K PT-146-1K and the 2K PT-146-2K (2K available from Music from Outer Space) are often use in DIY synth building. The 2K is a better choice if it's in the feedback loop of an op amp.

Since I did a quick web check on both KRL and Precision Resistor I thought I would post the links here:

After replacing the 1979 date code KRL RQ-81 with a PRC PT-146 the dB scale was only about half a needle width off. Now that's precision.

Re: Resistors for Mic Builders and Synths

Re: Resistors for Mic Builders and Synths

Got the specialty resistors in and had a look at the 1GΩ thick films.

I suspect that the tape parallels the other resistors and whoever packed these at Mouser may have touched them and deposited a little bit of oil. Separating the leads on the meter also improved the measurement so there are a lot of variables. Still darn close considering it's in the GΩ range. 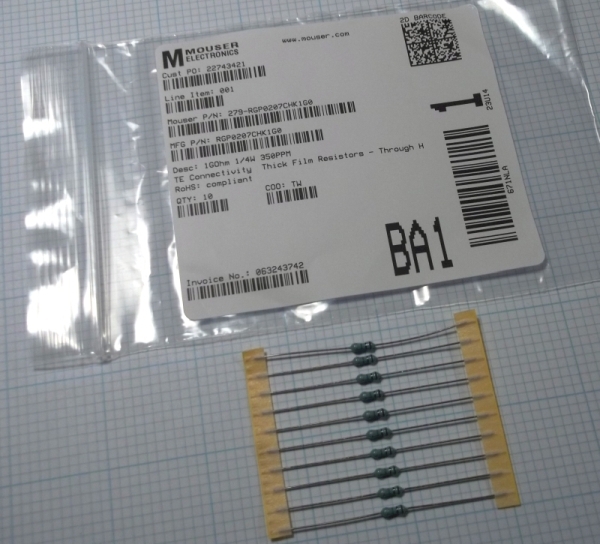 I'm going to play with the 3900 ppm PTCs next.
After that I'll pair a 1GΩ resistor to an LSK170 and see if they're quiet.
https://ka-electronics.com
Top

I had a chance to play with the 3900 ppm tempco resistors from KOA Speer.

The response time is really fast.
These are 5% resistors but the 25°C value was almost dead on. 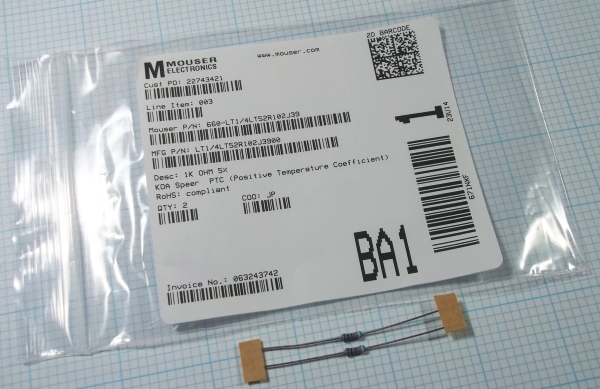 I made a quick xls calculator to see what "fixed" resistor values would be required to make a 3300 or 3400 ppm composite.
I assumed a +/-50 ppm resistor and set its TCR to 0 since its TCR is de minimis compared to the large TCR of the tempco thermistor itself.

When the tempco is padded to lower TCR the voltage divider resistor in a log (R1 below) or expo converter also needs to be scaled by either 1.15 or 1.18.

TI AN311 Theory and Applications of Logarithmic Amplifiers https://www.ti.com/lit/an/snoa575b/snoa575b.pdf