Relax in southern comfort on the east bank of the Mississippi. You're just around the corner from Beale Street and Sun Records. Watch the ducks, throw back a few and tell us what's on your mind.
Post Reply
584 posts

The Last Days Of The COVIDian Cult

The Last Days Of The COVIDian Cult

Authored by CJ Hopkins via The Consent Factory

This isn’t going to be pretty, folks. The downfall of a death cult rarely is. There is going to be wailing and gnashing of teeth, incoherent fanatical jabbering, mass deleting of embarrassing tweets. There’s going to be a veritable tsunami of desperate rationalizing, strenuous denying, shameless blame-shifting, and other forms of ass-covering, as suddenly former Covidian Cult members make a last-minute break for the jungle before the fully-vaxxed-and-boosted “Safe and Effective Kool-Aid” servers get to them.

Yes, that’s right, as I’m sure you’ve noticed, the official Covid narrative is finally falling apart, or is being hastily disassembled, or historically revised, right before our eyes. The “experts” and “authorities” are finally acknowledging that the “Covid deaths” and “hospitalization” statistics are artificially inflated and totally unreliable (which they have been from the very beginning), and they are admitting that their miracle “vaccines” don’t work (unless you change the definition of the word “vaccine”), and that they have killed a few people, or maybe more than a few people, and that lockdowns were probably “a serious mistake.”

I am not going to bother with further citations. You can surf the Internet as well as I can. The point is, the “Apocalyptic Pandemic” PSYOP has reached its expiration date. After almost two years of mass hysteria over a virus that causes mild-to-moderate common-cold or flu-like symptoms (or absolutely no symptoms whatsoever) in about 95% of the infected and the overall infection fatality rate of which is approximately 0.1% to 0.5%, people’s nerves are shot. We are all exhausted. Even the Covidian cultists are exhausted. And they are starting to abandon the cult en masse. 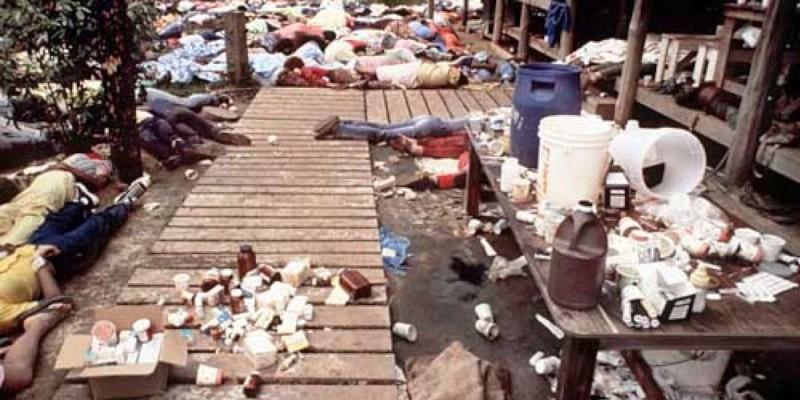 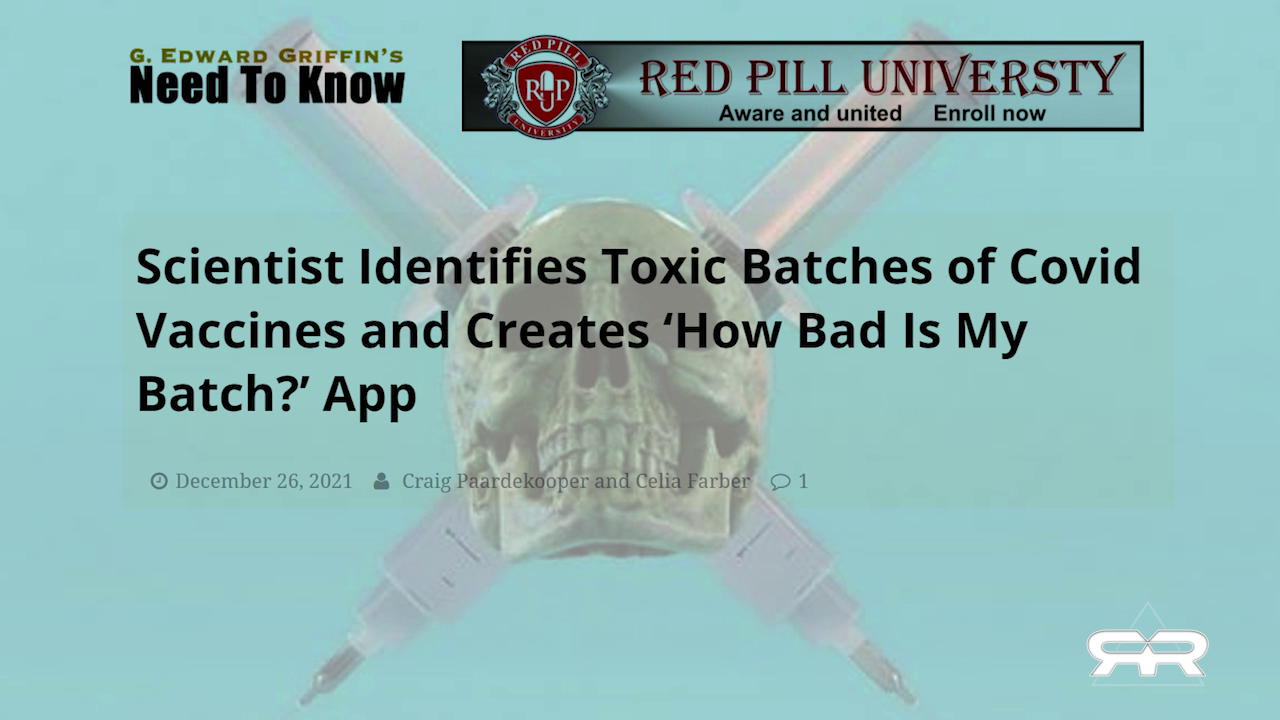 How Bad is My Batch? "Vaccine" Adverse Reactions By Lot Number

When Pfizer batch codes are arranged alpha-numerically along the x-axis, the following pattern appears - 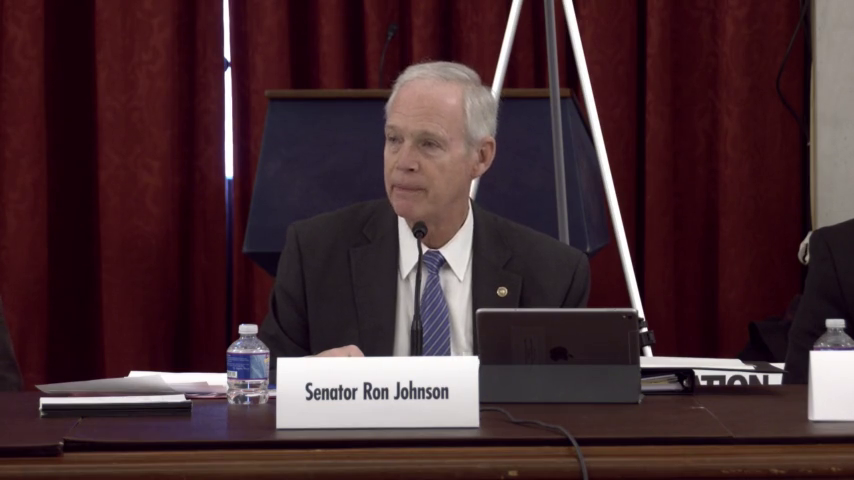 
A doctor who has been offering free telehealth services to COVID-19 patients during the pandemic says that early treatment for COVID-19 works, claiming that he has a 99.99 percent survival rate.

“We have a team of volunteer free doctors that donate their time to help treat these patients that come to us,” Dr. Ben Marble, the founder of myfreedoctor.com, an online medical consultation service, said at a roundtable discussion hosted by Sen. Ron Johnson (R-Wis.) on Jan. 24.

He added, “We deliver the early treatment protocols to them as early as we can, and we have a 99.99 percent survival rate. So, I believe myfreedoctor.com, the free volunteered doctors have settled the science on this—early treatment works, period!”

A paramedic prepares an ambulance at Hudson Regional Hospital in Secaucus, N.J., on Dec. 11, 2020. (Kena Betancur/AFP via Getty Images)
Marble was answering Johnson’s question about what people can do if they or their loved ones have COVID-19.

People can visit the website myfreedoctor.com, create an account, and fill out a patient intake form if the doctors are accepting new patients for that day. One of the doctors will then reach out in less than 24 hours. With a huge demand for their services, the physicians say they can only “accept a certain number of patients each day.”

Marble says that he and his small team of volunteer doctors prescribe [Dr. Peter] McCullough’s treatment protocol, which consists of hydroxychloroquine, ivermectin, monoclonal antibodies, prednisone, and other low-cost generic drugs. They also prescribe vitamins D and C, and zinc.


Tens of thousands of Canucks are lining the highways in support of the truckers and freedom. Truckers Across Planet Unite In Convoys Against Medical Tyranny

Truckers Across Planet Unite In Convoys Against Medical Tyranny


Truck drivers from Canada to the US to Australia to Europe are banding together in protests worldwide against their respective governments' overreach of public health, especially forced vaccine mandates.

Truck drivers from Canada to the US to Australia to Europe are banding together in protests worldwide against their respective governments' overreach of public health, especially forced vaccine mandates. 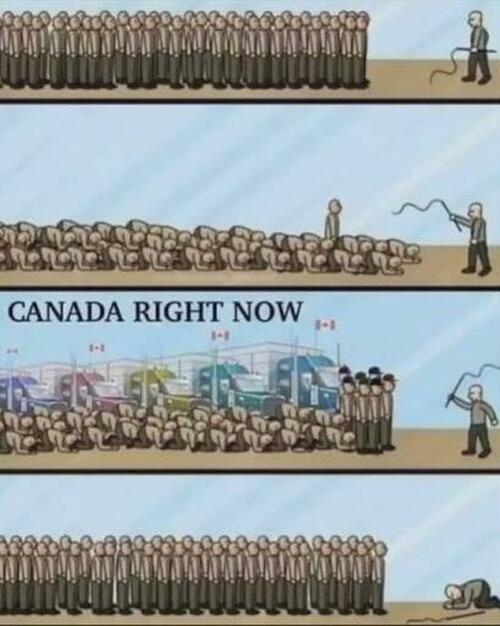 Dr. Anthony Fauci was told in a secret teleconference that the CCP virus had very likely leaked from a laboratory in China, yet still pushed the alternate narrative that it had originated naturally, new evidence allegedly shows.

Evidence suggests that Fauci also actively shaped a highly influential academic paper first published on Feb. 16, 2020, before later being printed in the prominent science journal Nature which excluded such a possibility.

The article, titled “The Proximal Origin of SARS-CoV-2,” was co-authored by five virologists, four of whom joined Fauci in a Feb. 1, 2020, teleconference.

During the phone call, at least three authors of the paper said they were 60 to 80 percent sure that the CCP virus had originated from a laboratory, something that they also reiterated in emails following the call.

At the time, public reports also emerged of a potential link between the Wuhan Institute of Virology in China and the CCP virus outbreak, yet these reports were dismissed by Fauci and other medical professionals as conspiracy theories.

This includes Peter Daszak, founder of EcoHealth Alliance, the nonprofit that funneled United States grant money to scientists in Wuhan and the other authors, who published a statement that read, “We stand together to strongly condemn conspiracy theories suggesting that COVID-19 does not have a natural origin.”

In an interview with EpochTV’s “Crossroads” program, Jeff Carlson and Hans Mahncke, hosts of “Truth Over News,” said that the latest evidence suggests that Fauci was well aware that the CCP virus had likely leaked from a laboratory in China, but actively pushed an alternate narrative. 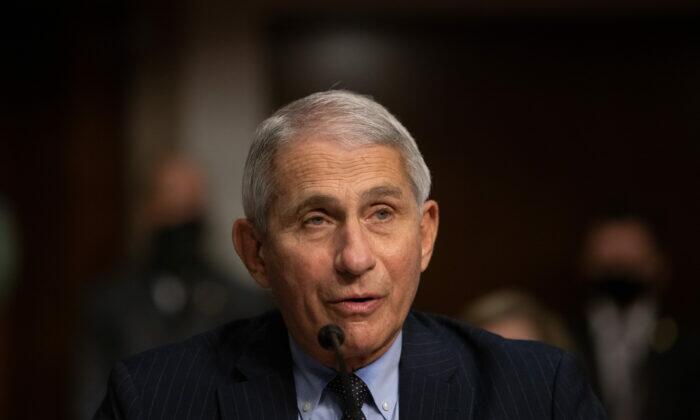 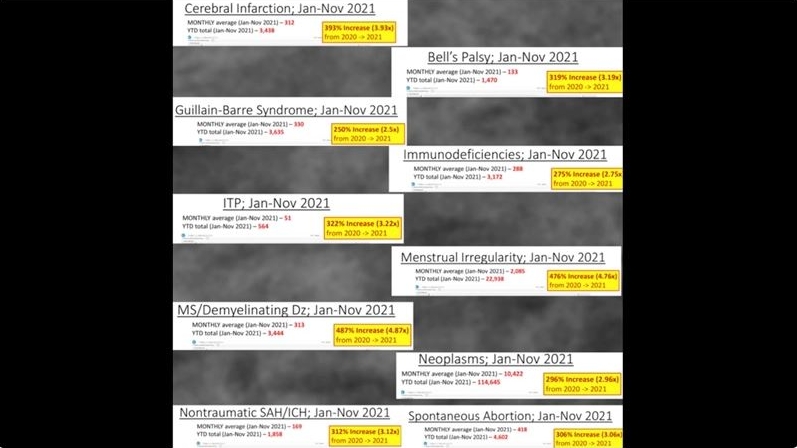 Johns Hopkins University Study: ‘Lockdowns Have Had Little to No Public Health Effect


A Johns Hopkins University literature review and meta-analysis of the effects of lockdowns on mortality stemming from the Chinese coronavirus found that “lockdowns have had little to no public health effects,” and have “imposed enormous economic and social costs where they have been adopted.”

“While this meta-analysis concludes that lockdowns have had little to no public health effects, they have imposed enormous economic and social costs where they have been adopted,” the authors of the Johns Hopkins University review wrote.

“In consequence, lockdown policies are ill-founded and should be rejected as a pandemic policy instrument,” they added.

Trampling The Truckers – The Great Reset Becomes The Great Awakening

Trampling The Truckers – The Great Reset Becomes The Great Awakening

There are few words to describe the depth of Canadian Prime Minister Justin Trudeau’s depravity. I’m not going to even try.

This is a person, because no real man would ever govern like him, so thoroughly ill-prepared for its job it doesn’t even know how to properly read from the prepared script.

It was all fun and games making Trudeau/Hitler memes until this week when Trudeau’s enforcers on horseback trampled an old woman.

Because a man with any sense of decency does not send men on horseback into a crowd.

The only thing worse than are the people commenting on this saying some variation of ‘well, she deserved it.’

Yes, she could have gone home.

Yes, she could have gotten the clot-shot.

Yes, she could have just complied with whatever Justin Trudeau told her what her morality was.

But Trudeau could have chosen differently as well. As opposed to acting like a scared little boy worried about facing public ridicule, he could have sacked up and met with the protestors.

Instead, he did what all boy-emperors have ever done, he chose violence and intimidation.

Those who blame the victims are worse than Justin Trudeau. They will never admit it, even to themselves, but their belief in the state as moral arbiter is shaken to its foundation when things like this happen.

So they bluster about playing stupid games, win stupid prizes. Empathy? Who needs that in Davos’ Brave New World.

Those against the protests have their reasons, none of them, however, are morally justified. Because if you allow the state, an immoral construction at its core, to define your morality, you will forever having to justify tyranny to remain on the side of the angels. 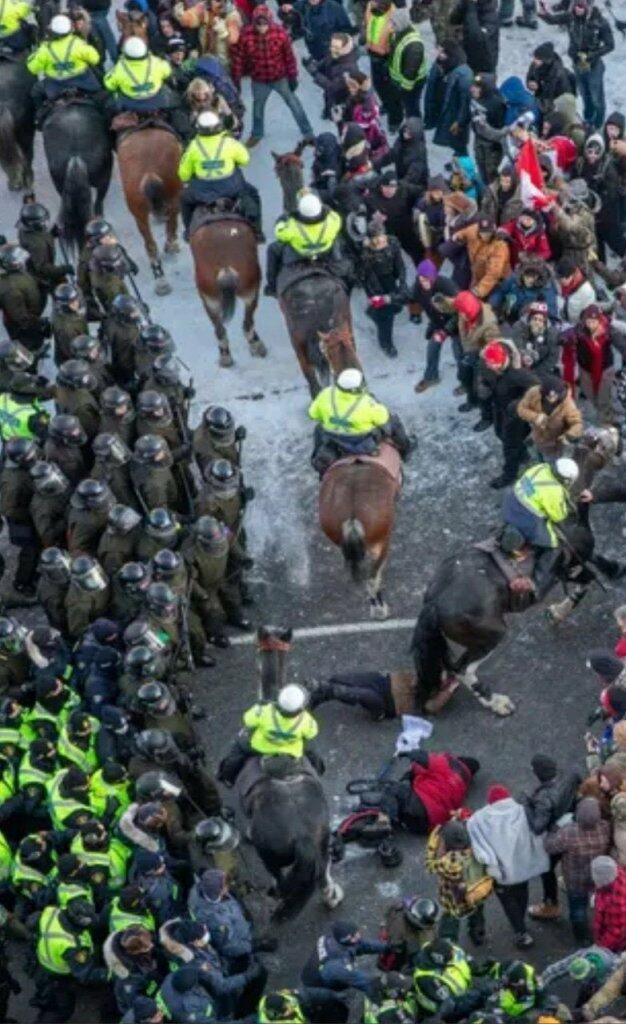 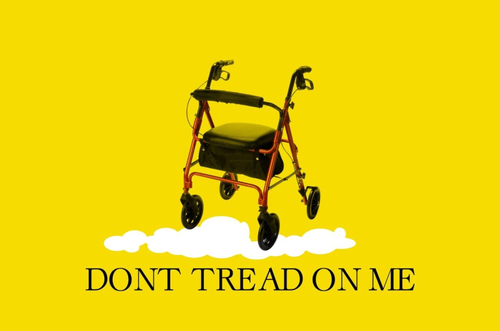