This is where we talk about testing, measuring and repairing things. Sometimes we have to repair the equipment we use to test, measure and repair other things. It's an endless cycle of fixing the broken things we need to fix other broken things.
Post Reply
7 posts • Page 1 of 1

Had an interesting set of coincidences happen today.

I run 4 PCs in the Office and Shop. Three are on one UPS and the workbench PC has its own UPS.
Both UPS are older APCs and the ATX power supplies in these machines are around 10 years old. One may be older.

Around 2:45 AM we had a large area power failure due to a nearby car wreck and the PCs were on UPS power.
As you might expect the beeping woke me up and I proceeded to shutdown the machines orderly while they ran on UPS.
I then shut down the UPS units to conserve battery and more importantly stop the beeping.

I was already awake when power came back on and I began to restart the network and machines.
Two PCs, on different UPS units, would not power up.
Hmm...

Being prepared I already had one new ATX supply and a used one so I installed them.
Both machines booted.

So why would two power supplies fail after simply being shut down?

The power supplies are old and the caps aged. Maybe 75,000+ hours of operation.
When they transferred to UPS power the caps saw increased ripple current.
These UPS run at a slightly higher frequency than line (clocks run super fast) and they have high harmonic content.
The high harmonic content and frequency "finished off," and maybe boiled off, the remaining electrolyte in the standby or primary side HV caps.
Other than that theory I don't have much to go on.

I'm thinking this power outage may have, in an odd way, done me a favor.
https://ka-electronics.com
Top

The power line may have had a big voltage spike. Lost the netural first (I lost a VCR in smoke)? Did some other devices fail? Check if surge protectors are GOOD.
Duke
Top

If they received a spike they continued to run for the several minutes it took to shutdown four machines and the UPS.
I have whole-house MOVs and both UPS units have MOVs as well.
There are also four driven ground rods and a Current Technology Power Sifter ahead of the APC on the workbench.
Nothing else in the house died.
https://ka-electronics.com
Top

I certainly have better things to do than perform forensics on a power supply I'm going to throw away but curiosity just got the best of me.

So I tore it down and had a look: 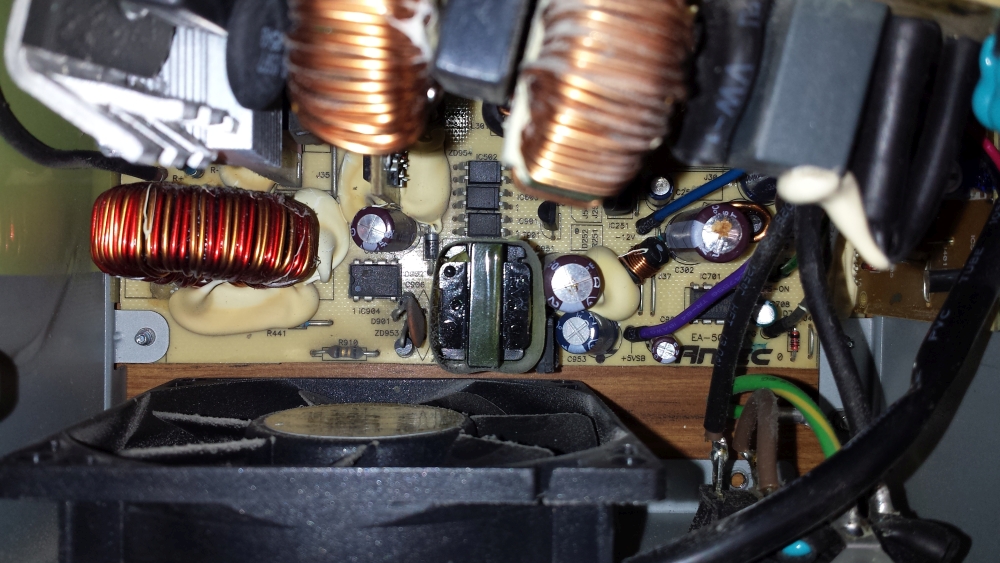 Sure enough the caps with the brown sleeves have domed. The one to the right has been venting some electrolyte for quite awhile.

This appears to be in the area of the standby supply: The green PWR_ON wire is just to the right.

What appears to be a burn on the board up near ZD954 and that blob of glue is actually a shadow.

My hunch may have been right: The caps had degraded and this just pushed them over the edge. I do believe this power failure may have done me a favor.

The whole house MOV has a green LED so it thinks it's OK. 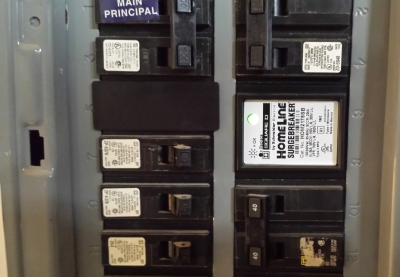 With temps nearing 100 lately and the air conditioner in continuous run for several hours a day it seemed like a good idea to feel the breakers for heat as well.
https://ka-electronics.com
Top

It occurred to me that two of the domed caps are on the secondary side of the standby switcher.

The input frequency and harmonic content of the UPS wouldn't have affected these capacitors.

They were just old. Very old.

There is one domed cap on the primary side.
https://ka-electronics.com
Top

I decided to replace one more power supply in my Ubuntu/Win XP machine.
This final replacement was 4 of 4.
It ran fine but I had no idea how old it was.

Turns out it was an Antec True 430 which was the original supply I bought with the case in 2002.
It was so old it required a 20 to 24 pin ATX adapter and SATA power cable adapters to use with a modern motherboard and drives.
This supply had run almost continuously since 2002 which is 175,000 hours.

Glad I replaced it.
https://ka-electronics.com
Top

FWIW I ended up opening the cases on the four power supplies I removed from service as well as the 5th used one I was keeping as a spare.
4 of 5 had domed caps.

The lesson to me is that it's a good idea to change out your older power supplies even if they're working...
Glad I did.
https://ka-electronics.com
Top
Post Reply
7 posts • Page 1 of 1