Where we discuss new analog design ideas for Pro Audio and modern spins on vintage ones.
Post Reply
163 posts

mediatechnology wrote: ↑Thu May 13, 2021 3:44 pm Thanks George and Mike!
To answer your question George I have a couple of extra boards.


So where do I sign up - can't see them in your store?

Do you have a BOM as well?

MIke - I sent you a PM. Thanks for your interest.
I hope to have a BOM later today and will then start on some assembly instructions.
I've spent the last few days testing the board pretty extensively - the 1M pt 10 sample FFTs take quite awhile to run.
https://ka-electronics.com
Top

Here's a link to the THD calculator I use to interpret ULDO/Nacho's FFTs.

I plugged in some typical measurement data into the xls.
The gray cells are for measurements and test conditions. 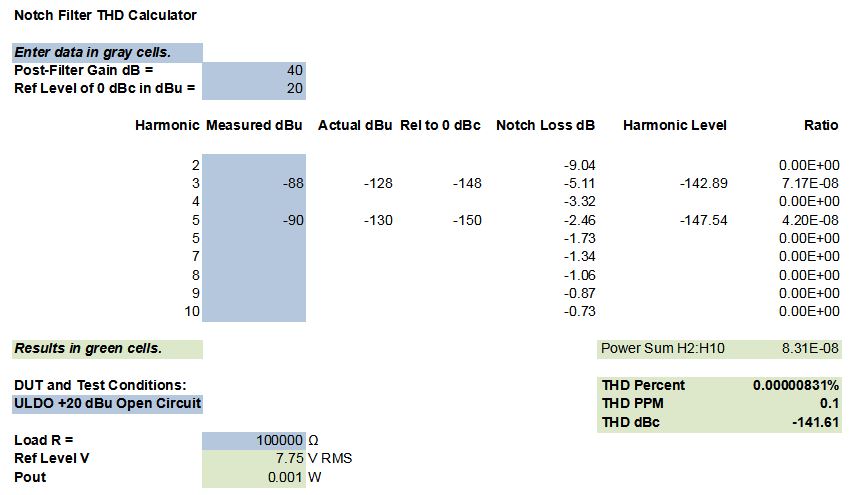 thanks for posting the calculator. I'll give it a try in a day or so.

and also found what I think are a couple of minor errors in the build guide/testing section.

The building was straight forward and I followed your build guide to the letter but double checked against my own BOM at the same time.

I found that IC8, the Notch filter 5532 amp (both sections of the 40dB post filter amp) has a d.c. offset of about 1.5 volts and is not a about 10mV volts as suggested in the guide. I tried some cherry picking on my Signetics 5532 and that was the lowest I could get it. So I put a LM4562 in instead which brought it down to a few 10s of mV. I might have a play with some alternative low noise FET opamps in that position.

I am out for a few days so I will post some photos for the scrap book when I get back.

Mike you're right about the output offset. That 10mV number was from cut and paste. The 1.5V that does develop shouldn't be too much of a problem since the output is AC coupled and the INA doesn't see much level due to the preceeding notch filter. I actually anticipated that and AC coupled it for that reason.

You may have noticed I also forgot to tell the reader to install VR2-5.

Thanks for the feedback. I'm about to build a second one based on my instructions so I may find more errors.
https://ka-electronics.com
Top

Using a 5532 I just checked the output offset on the first PC board and it's about -1.8V with the notch filter unbalanced and about -130 mV with the jumpers set to balanced.
That offset is primarily due to Ib*100KΩ*Gain.

I made Rbias large to allow a lowish value polypropylene film cap and let the offset develop to avoid an electrolytic anywhere in the notch filter.
The offset doesn't significantly reduce DR since the output would rarely be outputting a signal higher than -10 dBu.

The coupling caps for the VCA input and notch filter are a lot larger than they need to be for 1 kHz but I wanted to leave the door open to make a 100 Hz version without resizing them.
All the signal path caps on the BOM are polypropylene except the output coupling caps/1246 input caps which are polyester.

When I get a chance I'll drop an OPA2134 in the notch filter and see how it affects the filter output noise.
https://ka-electronics.com
Top

I built a second ULDO-Nacho board and made some 1 M point 50 sample average FFTs.

The Y-axis in the following FFTs have offsets to reflect the post notch filter gain (+40 dB) and the "carrier" (output level).
The result is dBc and does not reflect the insertion loss of the notch filter.
The Left channel level text display is the actual notch filter output level in dBu. 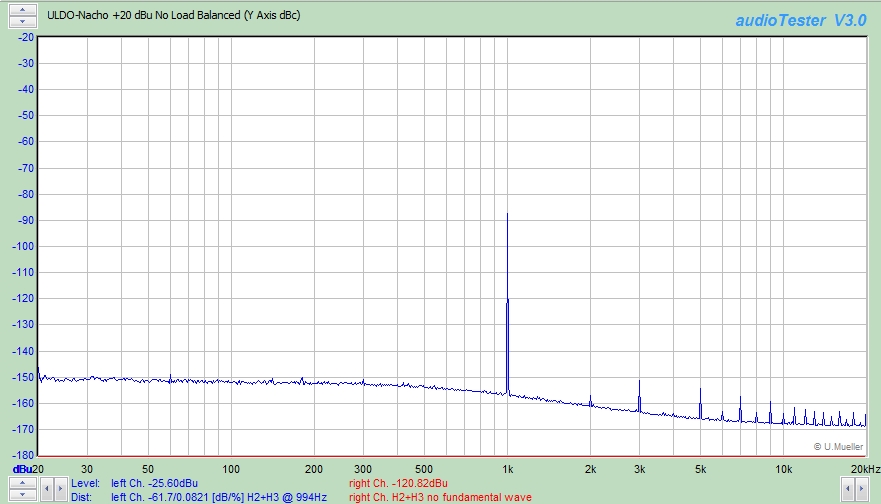 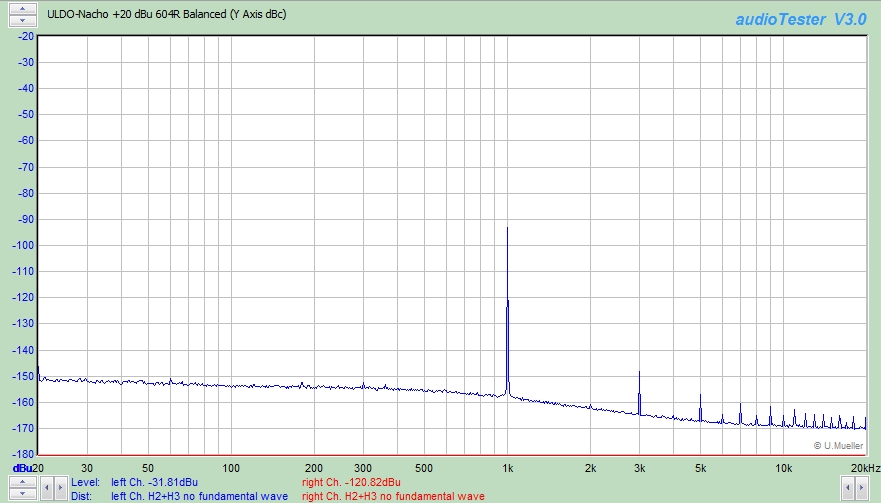 Other than matched resistors no other devices were hand-picked.
The op amps, THAT340 and 2180 VCA were randomized by virtue of being the next one in line at the end of the tube.

The active circuitry following the notch filter are working at very low levels and I would encourage anyone working with this circuit to get to know the low-level distortion signature of their A/D converter.

Fortunately most of the active devices we would measure have distortion at least an order of magnitude higher than the combined distortion of ULDO-Nacho and the converter.
https://ka-electronics.com
Top

I think the Output Level range at the low end of adjustment needs to be limited by increasing R30.

There are two reasons for this.

At -10 dBu balanced the detector is operating at a -16 dBu which is approximately 123 mV RMS level.
I haven't found the solution for this but it appears to not be periodic and looks like 1/f noise in the detector and AGC loop.
At levels from +10 to +26 the amplitude variation is unmeasurable at less than 0.01dB.

The 36 dB super-wide level adjustment range was just a little too-good-to-be-true.
I need to start work on an output attenuator with 10 dB steps and make the pot's adjustment range about +18 db.

The level entering the attenuator would nominally be +20 dBu with adjustment up to +26 dBu.
Having the pot adjust -12 dB lower than the nominal "0" provides a 2 dB adjustment overlap of attenuator steps.
https://ka-electronics.com
Top

as promised, here are a couple of photos for your scrap book.

is is a case of function over form as I use screened steel boxes for my test kit as you can see, that keeps all the local RF crud out. I haven't done any detailed measurements yet.

You mentioned building an attenuator: you may already have one, but I have also attached a spreadsheet that I used for such beasties. I was going to build balanced unit based around 600 Ohm O-Pads in a 1-2-2-5 configuration with x0.1dB, x1dB and x10dB series and using Schadow 4 pole double throw push buttons.