Where we discuss new analog design ideas for Pro Audio and modern spins on vintage ones.
Post Reply
163 posts

Hi again,
I forgot to add that to avoid any mains-powered PSU etc. I use a 5 V to +/-15 bucking regulator with a USB input connector. This means the whole thing is fully floating and can be powered from one of those battery packs used to charge up mobile (cell) phones.

Would the USB Power supply you are referring to be a Silent Switcher?

Your photo made me go to eBay and look for a Leader LAT-45.

I remember that when I modified my IG-18 in the early 1980s with the Morrey Super Oscillator board I bought an extra attenuator switch and removed the old one.
The Morrey mod replaced all the attenuator resistors.
I found it and may see about modifying it.
https://ka-electronics.com
Top

Thanks for the kind words.

I use a silent switcher to power an existing sound card output interface, but when I bought it it came from the US (instead of Europe where Jan Didden is based) and cost me a fortune in import duties and 'commission. So I have started using a Chinese copy ( https://www.ebay.co.uk/itm/381983816265) that seems to work just as well, and costs about 20USD. You can increase the output to +/- 25 volts or so, enabling a extra low-noise regulator to be put between it and the target device if required.

The Leader LAT25 is a very useful piece of kit, but it is single ended (unbalanced), and I don't want to mess it up by modifying it to balanced which is why I am going to build a balanced attenuator as I mentioned above. I added the BNC connectors on the Leader as my test set up is based around them.

I will probably front end the balanced attenuator with a switch to flip between XLRs inputs from your oscillator and the sound card output, which I use for other tests, plus add a 'Term' switch to terminate the 600 Ohm attenuator chain.

I am just waiting for the switches to come from Mouser and have planned out a small pcb to take the 4 fixed 600 ohm stages (1/2/2/5 dB). The neat thing about using the Schadow switches is that once they are soldered to the pcb, the button assembly screws to the front panel and so it becomes self supporting. They also are self indicating so there is no need for LEDs indicators.

I had a chance to open the attenuator spreadsheet - it's very well done.

I just remembered that the Heathkit attenuator is single-ended.

The 4PDT F4 switch seems like the most practical if the contact distortion remains low over time.
Would you use Gold on yours?
I've had very good luck with the Silver Tone Luck switches over the years.
4PDT toggles would cost a fortune and I'm afraid relays would add some distortion.
It doesn't take much non-linearity to show itself at -140 dBc.

I count 9 F4U switches. Is that correct if 0 dB (direct) is all of them released?

I wanted to check ULDO-Nacho's performance using a 20 dB output pad to get 0 dBu.

I used a U-pad with a 100Ω shunt. Each leg was 442Ω made up with two 392Ω resistors in series with the onboard 49.9Ω build-outs.
The actual output level was +20 dBu into 1KΩ; the notch filter was connected to the pad output.
The FFT levels shown below are dBc without notch filter insertion loss.
The FFT is 1M point with a 50 sample average. 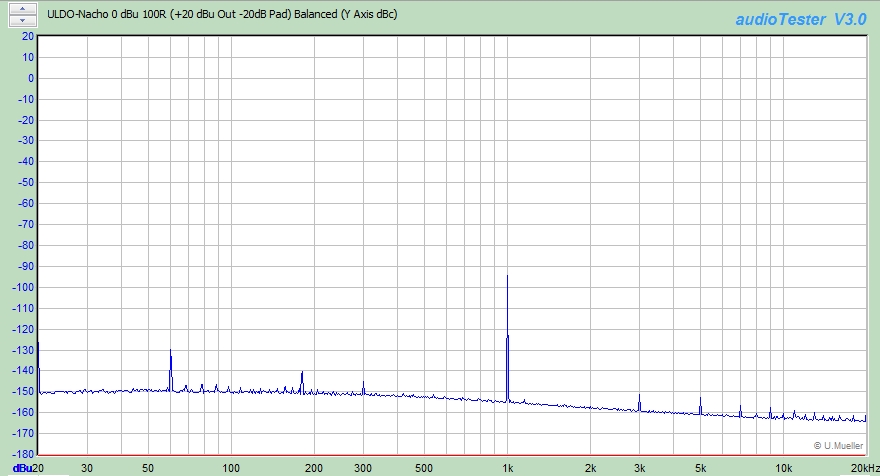 A pad is definitely the way to go at levels below about +6 dBu.
I'm looking at the Amber 3501's balanced pad which has 10 dB steps from +20 to -60 dB along with a "direct" low resistance output.
https://ka-electronics.com
Top

I spent part of the weekend testing an output attenuator for ULDO-Nacho. 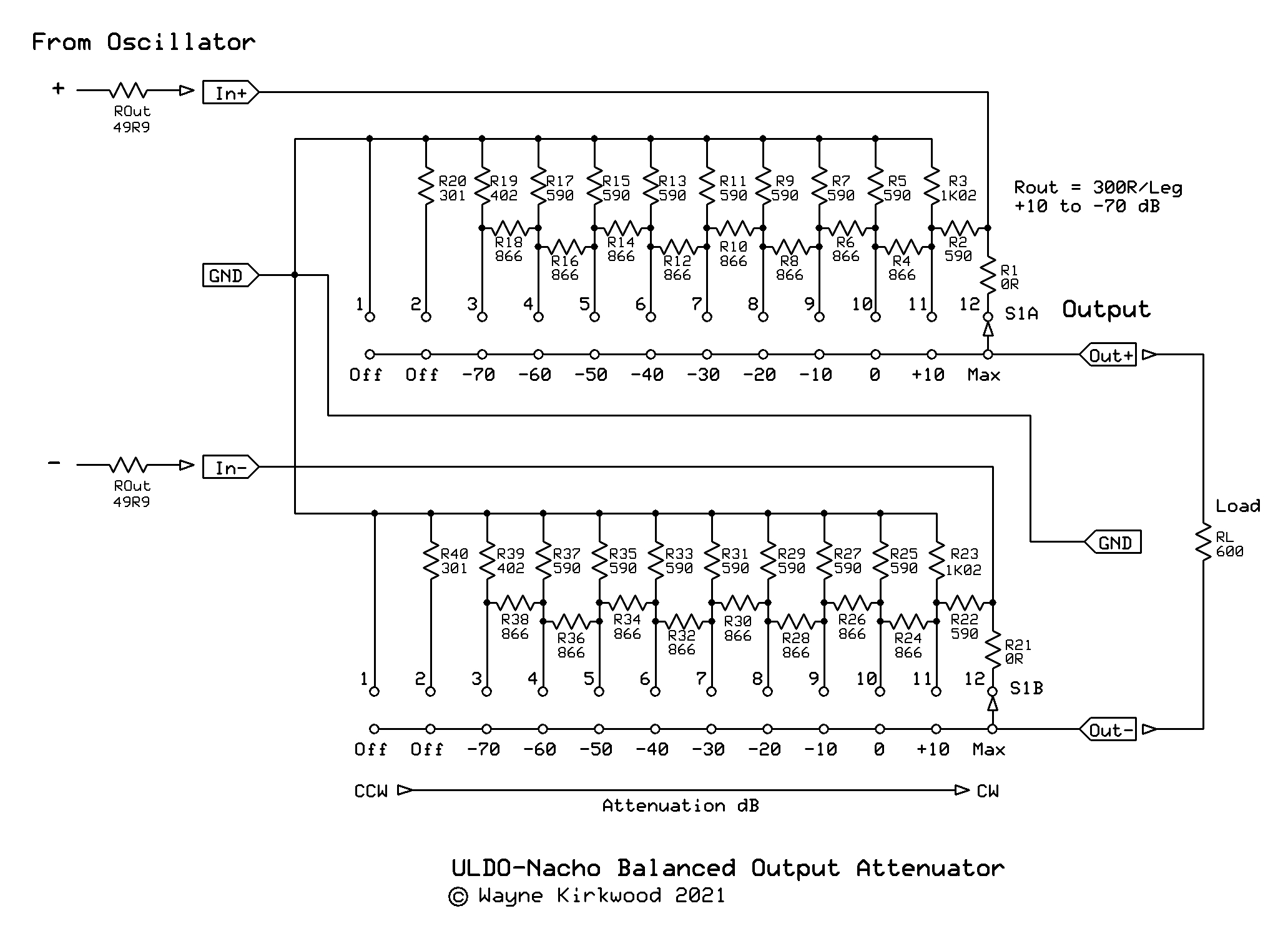 (Rout+R2)||(R3 + the rest of the network) has to not only have the proper attenuation but also a 300Ω Thevenin equivalent/output impedance.
I found the values by trial and error and then confirmed via calculation the result based on the empirical values.
The +20 "Max" output has a 49.9Ω/leg output impedance - all others are 300Ω/leg.

The relative step size measures very accurately even when terminated with a high impedance load.

Grounding of the lower steps requires low resistance traces.
I noticed this when I tested it in the balanced configuration on a Protoboard.

I may not use a 12 position rotary but drew it for someone who wanted to get their money's worth and use all 12 positions of the 2 pole switch.
I happen to have a bag of Grayhill 8 position 2 pole switches so I'll build it with a range of -50 dB to +20 dB.
I think I'll lay out a resistor board that will use flying leads to the switch.
https://ka-electronics.com
Top

Now that I have an Output Attenuator prototype I wanted to look at the low-level performance of the A/D to make sure it has enough spurious-free dynamic range at low level to accurately assess the notch filter output.

The following FFT has the attenuated oscillator output compared to the notch filter output sampling the unattenuated +22 dBu output of the oscillator.
The FFT is 1M point with a 50 sample average.

The harmonics in the red trace are from either the oscillator itself or the oscillator and notch filter.
The largest spur, H3, is only about 57 dB below the 1 kHz notched carrier.
ULDO is running very near its clipping point which is around +26 and the higher-order harmonics in its output (or the notch filter) can be seen.
Despite this its THD is an astonishing, almost too-good-to-be-true level of around -151 dBc.

With THD typically running -140 to -146 dBc I suspect that there is some distortion cancellation occurring.
But, to be honest, I've never measured the oscillator at such high level at the 2.26KΩ load impedance of the attenuator with a 1M point 50 sample average FFT.
I was content to say distortion was in the noise floor - now I'm looking for needles in haystacks.

Without regard to the oscillator's THD (-140 or -151?) it appears that the A/D, at low level, has plenty of SFDR to measure the notch filter preamp output.
A more fair comparison would be to check the A/D at a lower level comparable to the -40 dBu notch level but I think it would be in the noise.

The combination of ULDO, Nacho and the 2i2 has the dynamic range to accurately measure THD in the range of -100 to -120 dBc to perhaps -130 dBc.
With a DUT having distortion at -120 dBc ULDO-Nacho has a measurement range that is at least 20 dB better. 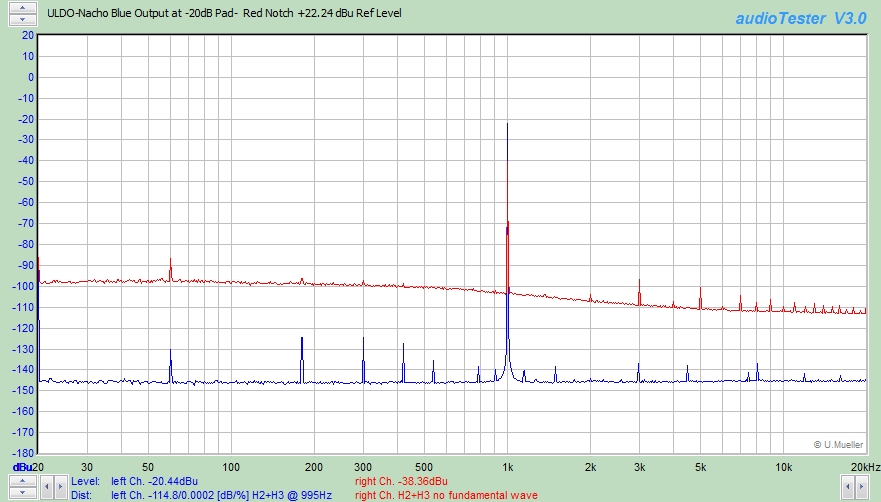 I built the 1-2-2-5/10-20-20-50 ratio attenuator according to the spreadsheet I posted and it works well with the stated attenuation spot on. The Schadow switches work well. I also added a 600R termination switch so as to terminate the attenuator chain - the stage after the attenuator is a 10K bridging input. I had forgotten that Mouser just supply the raw Schadow switches when you order them: the extra panel mounting and 'magic eye' indicator I had to get from Bulgaria. - Doh

I then inserted 250R resistors in each oscillator output leg (together with a bypass switch so it is switchable between 50/300 on BNCs and 100/600 on the balanced XLR) I still haven't done any in-depth distortion figures yet with the notch filter, but I can get 0.000055'ish straight off using ARTA into my sound card. So your osc. works very,very well so far.

The sweet spot on my sound card input is at about - 12dBFS, full scale being about 2 volts if I remember correctly, and I am running the osc/attenuator chain with 10dB attenuation in circuit. I shall play some more soon.

I see that you use the 'Audio Tester' application. How do you get on with that? I find ARTA is very good, but has some missing features such as direct frequency measurements and marking harmonics and I am tempted to buy Audio Tester.

Cheers, from a very sunny UK

I still haven't done any in-depth distortion figures yet with the notch filter, but I can get 0.000055'ish straight off using ARTA into my sound card. So your osc. works very,very well so far.

Thanks Mike!
I guess I should make more of them.

The lowest I can measure by direct connection to the A/D is 0.0002%.
I've seen that result with both the Focusrite 2i2 and the TI PCM4224EVM.
I think they're at their lower THD limits.

It's good to know that the results are repeatable.
There are four boards. I've built two which performed almost identically.
I shipped my second one to a colleague, the third went to you and the fourth to a mastering facility.
I haven't gotten feedback yet on #4.

2V RMS is usually the target 0 dBFS for almost all 5V differential-input A/D converters.
If 2V RMS is 0 dBFS on the input to your A/D then it looks like the input stage is unity gain overall from the connector to the A/D input.

When I do gain calibration for AudioTester I input 1V RMS and then set the input levels to -6 dBFS.
That sets the overall input-to-A/D gain at unity.
I think that's better than trying to find the exact overload point at FS since it avoids compression near FS that may occur from diode clamps at the modulator input.

Though I don't show it I'm going to make my internal 600Ω termination switchable as well.
I'm also going to add a switch to the notch filter input to switch between "Generator Monitor" and Input.

One thing that occurred to me about the notch filter is that the output offset of the 5532 post-notch-filter amp forces it into class-A.
That may be beneficial.
Have you tried a FET-input amp there yet?
I can't use an LME49720 because it rectifies a nearby WiFi access point and my DECT 6 cordless phones.
https://ka-electronics.com
Top

Introducing "Atto" an Attenuator for ULDO-Nacho

I've laid out attenuator boards for ULDO-Nacho and have named the board "Atto."

The "Atto" attenuator for the ULDO-Nacho Ultra Low Distortion Oscillator and Notch Filter.

It may seem odd that the input is on the right but I wanted the attenuator pads, which connect to the switch stators, to mechanically follow the rotary switch terminals which will connect to the board with flying leads.
Direct, which is "+20", is the most clockwise position and is on the right-hand side of the switch.
Off is the most counter-clockwise position and is therefor on the left.

I put ground planes on both sides of this board.
The top plane is an electrostatic shield to reduce capacitive coupling between attenuator sections.
I could have made a tighter layout but I wanted a lot of real estate between the attenuator shunts.
The even-numbered series resistors, placed horizontally, provide spacing.

The bottom plane is also a capacitive shield but it does carry current through the center.
The top side ground "backbone" is stitched along the center to the bottom plane.
I wanted the ground bus to be super-low resistance and inductance: stitching it to the bottom plane makes for a very beefy conductor.
Though I could have made the resistors connect directly to the lower plane its a pain in the ass to remove any component tied directly, without a thermal pad, to a plane.
I didn't want to use thermal pads due to their higher resistance, so I chose a top-side bus stitched to the bottom-side plane.

There should be no eddy currents - the shield connection for the switch commutator, labeled "S" carries no current and is only tied at the board end.

1 kHz shouldn't be much of a challenge for capacitive coupling but I'd like it to work at higher frequencies as well.
We'll find out soon enough when the boards come in a week from now.
https://ka-electronics.com
Top
Post Reply
163 posts